The Living at Whitman Initiative will be the key to a closer-knit campus community.

The last time Whitman College built a residence hall, Donald Sheehan was the college’s president, the Beatles had only just broken up, and the campus was home to around 1,100 students. Since then, the population has grown by more than 30 percent, with 1,500 students coming to Walla Walla for the most recent academic year.

“Residence life is the cornerstone of development of community on campus,” said Chuck Cleveland, vice president for student affairs and dean of students. “That building block starts the first day.”

Soon, the campus will go from cornerstones and building blocks to a brand new 150-bed residence hall and dining facility, thanks to the Living at Whitman Initiative, launched by the Board of Trustees in 2015.

Living at Whitman began with a working group of students, staff, faculty and governing board members, charged with investigating how Whitman might improve its undergraduate residence life experience. The main question was: how do we become a stronger residential liberal arts college? 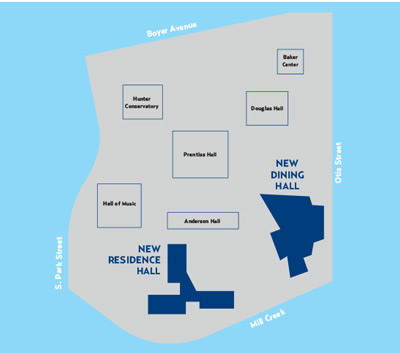 The group found that the most valuable opportunity would be to “develop a greater sense of community among the sophomore class, because they felt kind of marginalized,” Cleveland explained.

According to Associate Dean of Students for Campus Life Nancy Tavelli, first-year students build a strong connection quickly, in particular thanks to the Encounters program and their shared living experiences.

“We sometimes have first-year sections that want to get back together as they graduate. [But] something happens between the first and second years, where [students] have less cohesion because they are so scattered.”

According to a report by Whitman’s Office of Institutional Research, 70 percent of first years live in Jewett Hall or Anderson Hall. Sophomores, on the other hand, are spread between five or six halls, as well as interest houses and fraternities. The report found that, for many students in their second year, the dramatic increase in living options became a source of stress.

In their first year, “there’s all this focus on connection, and then, all of a sudden, they’re in an apartment in College House and it’s really hard to see anybody,” Tavelli said.

As well as improving the sophomore experience, the new hall should alleviate the strain on current residence halls. While some of the interest houses are among the oldest homes in Walla Walla, the first purpose-built residence halls were Lyman (1923) and Prentiss (1926). Marcus House, North Hall and Tamarac House were added after the construction of Douglas in 1969-70.

A good residence life experience goes beyond the four walls of a dorm room, according to Cleveland.

“The more connected to their college [they are], the more likely they are to persist and graduate, to have good experiences, to get to know their faculty and to have greater satisfaction with the institution. It’s important that that sense of community bind us together in a multitude of different ways.”

After the Living at Whitman Initiative was approved, the working group met to discuss options and then visited other colleges in the Northwest, finding out what peer institutions offered in terms of both housing and dining.

“Collaboration and community were big principles,” Cleveland said. “We wanted people to interact.”

Plans for the new residence hall, designed by Zimmer Gunsul Frasca Architects of Portland, show an airy and bright space, with open stairwells and a two-story entry and common area. Each of the three floors converges in a central space designed for socializing, working with classmates or meeting with friends. Each section will share a lounge and kitchen area, and there will be both single and divided double rooms.

Tavelli explained: “We tried to take what works for first-year students to build community, and then transition it into a more independent style.” That style is reflected in the division of living space into pods of 16 or so students.

However, everyone will have to enter through the main lounge, creating a greater sense of shared living space, and the rooms will be more “home-like,” including features such as built-in shelves and closets. Social spaces and game rooms will be upstairs rather than hidden in the basement, and the bathrooms—which many also thought of as a social space—will be gender inclusive and more private than in first-year halls.

Throughout, there will be areas that allow for flexible meeting options.

“Some students want to work together, see what’s going on,” said Tavelli, “so those who like a little chaos in their work can find space to do so, while those who like quiet when writing a paper or reading for class will be accommodated too.”

Making the sophomore experience just different enough was important. “We wanted the experience for sophomores to be different from their experience as first years, so that when they leave Lyman or Jewett or Anderson, they’re going into a different residence hall experience. Some of that will be structural and some of it will be through the programming that will be developed,” Cleveland said.

The new dining facility will offer around 500 seats and be centered around a marketplace layout. The plans currently include multiple counters and cafes providing a wide range of food options. Tavelli said that they hope to see older students, staff and faculty members join Whitman students in the new dining space.

Though there will be smaller dining nooks to accommodate tight-knit groups, “one thing we are keeping are those long tables—the collegiate look,” Tavelli added. “Because our first-year sections get together at least once a week for dinner.”

Both buildings will be designed to be as sustainable as possible, and will likely make use of sunshades, natural lighting and ventilation, and include systems to monitor energy efficiency. 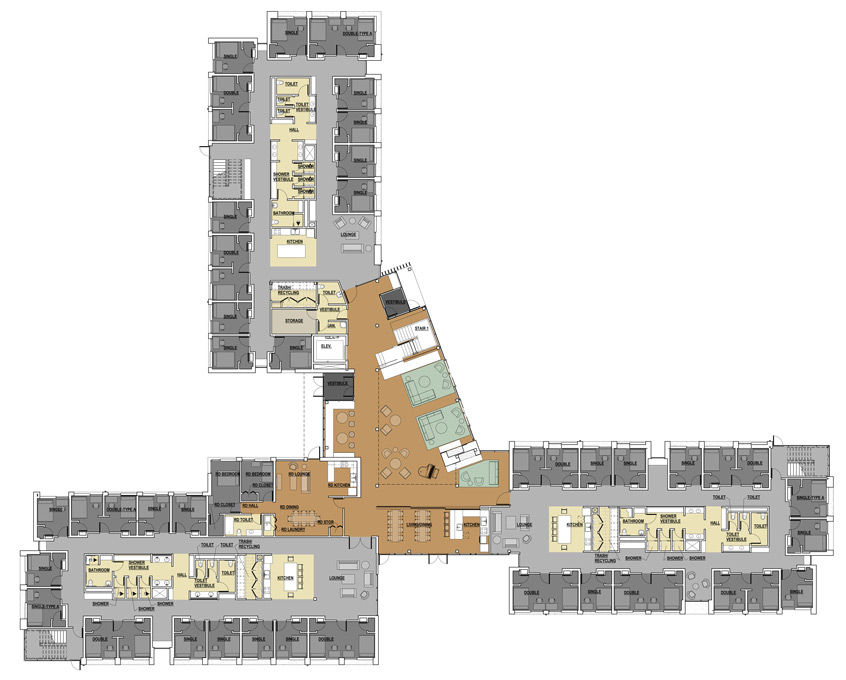 When the two structures are completed—in what will perhaps be the biggest noticeable change to the campus—a large part of student life will take place on the “other side” of Boyer Avenue: Prentiss Dining Hall will be removed, and the new residence hall will nestle between the back of Anderson Hall and Mill Creek. The new dining hall will sit between Otis Street, the creek and a new open space created between the buildings.

That space, which will include a volleyball court, will be an additional area for students to gather, study or throw around a Frisbee.

“We are very attuned to the landscape,” Cleveland said. “It’s a green space that will be very useable and, again, bring people together.”

The total cost for the project is estimated at $41 million. The college needs to raise $10 to $12 million of the total amount from alumni, parents and friends, to add to modest debt and other sources of funding that are currently planned.

“To date, we have gift commitments of more than $7.3 million from a small group of very generous donors,” said President Kathleen Murray. “We are counting on those who love Whitman to help us with the remaining $4.7 million. Residence life is an experience Whitman graduates across the generations have in common. This project will build campus community in new and important ways, helping advance the outstanding student experience for which Whitman is known and paying it forward to current and future generations of students.”

Like Murray, Tavelli sees the new initiative as an important step in building community for Whitman’s students.

“It will transform the campus,” she said. “This is a generational opportunity.”