Curtis promotes a bright idea in the clean energy revolution 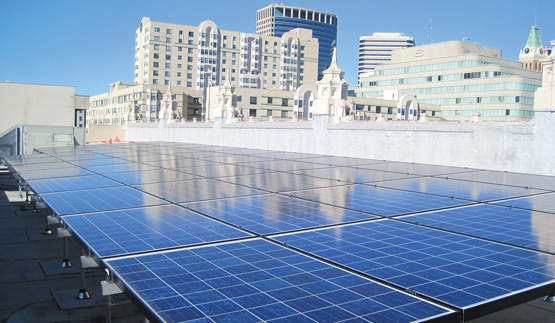 The Solar Mosaic community funded this $98,000 solar array on the roof of The Asian Resource Center in Oakland, Calif. The project is expected to save the ARC more than $100,000. Photos: Solar Mosaic/Lisa Curtis ’10

Lisa Curtis ’10 works for a solar company, buys locally and rides her bicycle rather than drives. However, don’t call her an environmentalist.

“The traditional, narrow definition of environmentalism doesn’t work anymore,” said Curtis, who works in communications for an alternative energy organization called Solar Mosaic. “We have encompassing challenges, like climate change and building a clean, green energy economy, so we need holistic solutions,” not labels.
Solar Mosaic raises money to build “solar power plants” on the rooftops of buildings. The projects help organizations save electricity and reduce their carbon footprints. The startup has been around for just over a year but has raised more than $350,000 and funded five solar projects.

“These are not donations. They are investments in technology. You put money into a solar project, and as it reduces electricity costs, you begin to earn back money on your initial investment,” said Curtis, an environmental studies-politics major in college. “I served as Whitman’s sustainability coordinator during my final year. I wasn’t just an advocate for clean energy; I also learned about the issues.”
After graduation, she served in the Peace Corps in Niger and interned in the White House, writing political briefings for President Barack Obama. At Solar Mosaic, Curtis helps bring in small investments, oftentimes from investors who won’t personally benefit from an individual project.

“If you don’t own your own home or if you live in an apartment, you might not be able to build a solar power station on your roof. But investors still want to be part of a movement powering their country with clean energy.”