Ten years ago, Whitman had seven incoming first-year international students; in 2019, there were 49—the highest number on record. In Fall 2020, international enrollment dropped down to 38—still the second-highest mark on record.

During this time period, Whitman’s acceptance rate for international students has ranged from 12% to 22%. The college’s overall acceptance rate has also increased from 41% to 56%.

According to the Office of Admission, COVID-19 has reduced international student applications: 1,419 students applied before the pandemic, and 1,280 students applied for this academic year.

However, international student enrollment going into next year will still remain relatively robust.

“30 international students have committed to attend Whitman next Fall, so it looks like we’re on track for another strong year in terms of international enrollment,” Director of Admission Adam Miller wrote in an email to The Wire.

Angel Baikakedi, a first-year international student from Botswana, who intends to major in economics, said the guidance she received from the Admission and International Students offices led to her decision.

“The support I received before coming here was a big factor [in] me joining Whitman because we were in difficult times,” Baikakedi said.

The college meets students’ needs by a combination of grants, scholarships and preferential on-campus employment.

“International students are not eligible for federal loans, so in meeting their financial need we replace the loan expectation we have for domestic students with scholarship funding from Whitman College,” Director of Financial Aid Marilyn Ponti said.

These grants come in different forms. Students who graduated from United World Colleges receive a grant from the Davis Foundation via the Davis UWC Scholars program.

Zakir Hussain, a first-year international student from Pakistan, is a UWC Dilijan graduate. The two factors that contributed to Hussain’s decision to join Whitman were a generous financial aid package and the option of a combined astronomy and physics major.

“Whitman provides me financial aid in the form of [an] international students scholarship, Davis financial aid … and that covers for most of it,” Hussain said. “As a UWC alumnus, the Davis Scholarship covers about 15% of the total award I get.”

To apply for financial aid, Hussain had to fill out a College Scholarship Service profile. The financial aid based on this profile gets reevaluated every year. The deadline to fill the application for this year is April 15.

Hussain expressed his concern that even a one to two percent decrease in financial aid could make things difficult for him.

Every year, the college goes through a budgeting process led by Chief Financial Officer Peter Harvey. There is no financial cap on the aid that international students receive but it has to be balanced with other costs that the college is responsible for. Miller, at the Office of Admission, said the college’s financial aid plan is unique among its peers.

“The financial aid commitment Whitman has made with its international students is truly remarkable,” Miller said.

“Whitman seemed like a place where I could find a community that I could be part of,” she said. 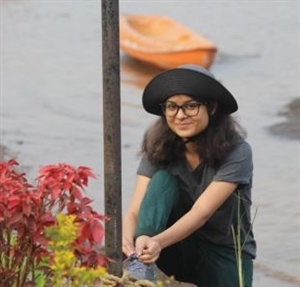 Tejashree Jadhav, is a news writer for the Whitman Wire and a first-year international student from Pune, India. This is her first semester working for the Wire and she intends on majoring in English and psychology. She is a lover of words and writing and is an avid poet. “Whitman makes it possible for me to attend college despite my financial background,” she says. Read more about Jadhav in the Whitman magazine student feature "A Poetic Journey."