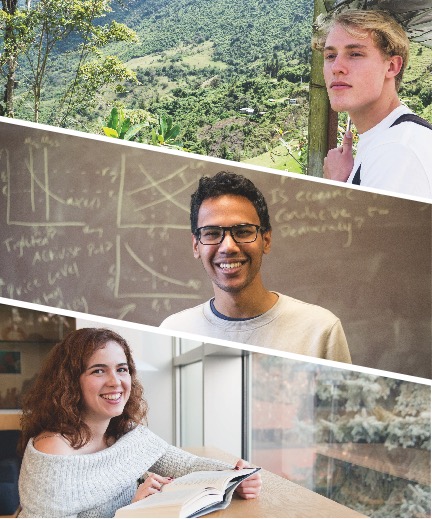 For Jones, the perspective and skills gained from double majoring and studying abroad have proven "irreplaceable," he said. Aspiring attorney Assegaf holds that the strength of his education has been "knowledge being diffuse, so you can take all these classes and find connections between them." According to Wilson, double majoring engages "both sides of my brain" and broadens her worldview.

There are more than 100 double majors at Whitman. The college supports them by being flexible about how major requirements also count for distribution requirements.

"I think that students value the opportunity to see how their two majors interact in terms of subject matter as well as intellectual skills and mindsets," said Provost and Dean of the Faculty Alzada Tipton. "I believe that students recognize that they will use what they have learned in both majors in what they do after they leave Whitman and that the multidisciplinary problems and projects they will be tackling require multidisciplinary approaches."

Here's a look at a trio of Whittie double majors.

Gareth Jones' commitment to his twin majors-biology-environmental studies and Spanish-began with his enrollment in a dual-immersion elementary school in his hometown of Corvallis, Oregon. 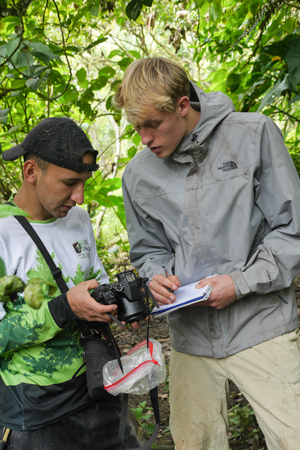 "I've been surrounded by the fantastic language and culture of Spanish since first grade," he said. "Coming into Whitman, I already had my eye on the biology-environmental studies major. My decision to shoot for a Spanish major has its roots in the wonderful bilingual education I received growing up."

Another factor was a trip he took with his parents in sixth grade to Chile and Argentina to examine ecological succession-the biological process of a species changing over time-after a volcanic eruption.

Jones' mother chairs the Geography Department at Oregon State University and his father worked for the United States Geological Survey and U.S. Forest Service, studying Mount St. Helens. Thanks to Jones' early foundation in Spanish and interest in science, he was able to "conduct interviews with local people affected by the eruption, help my parents with soil profiles and catch frogs for a herpetologist who was traveling with us."

Last summer, he journeyed to Sweden with Professor of Biology Heidi Dobson to participate in Pollination Biology, a course that is part of Crossroads, Whitman's short-term off-campus studies program.

"He is quite well-traveled, loves to learn about the world and has an easy way in his approach to life. He was active in joining other students for cooking meals, exploring the area on bicycle and trying different eateries," Dobson recalled. "He is also very sensitive to and aware of students around him and their needs and concerns. He is modest, accommodating, respectful and a good listener."

For Jones, protecting natural landscapes for future generations "seems like a noble and wholly fulfilling pursuit." He said he has "always found a remote natural setting to be the best way to de-stress, rest, reset one's perspectives and remember that really simple experiences like hiking in a forest can be some of life's greatest moments."

Jones fostered his love of Spanish as Whitman coordinator of the Green Park Elementary Bilingual Program, a community service project run through the Student Engagement Center, during his sophomore year. He also took a course called Medieval Poetry from the Iberian Peninsula, taught by Assistant Professor of Spanish Nico Parmley, and "after thoroughly enjoying the ride through a demanding class like that, I knew I would really enjoy pushing myself toward a Spanish major," Jones added.

Parmley, one of Jones' advisers, agreed.

"His insights into difficult texts and his ability to articulate critical problems with nuance in two languages is marvelous," he said. "He was always prepared, engaged and insightful. I am particularly impressed with how he is able to ask good questions of texts in both discussions and papers, sitting with the tension, ambiguity and doubt of not knowing."

Jones studied abroad in Quito, Ecuador, through the SIT: Ecuador Comparative Ecology and Conservation program, which offers an overview of the biological and social components of ecological issues. The program was split between a homestay and excursions across the country, culminating in a month-long project in Spanish. He intends to turn his effort-a survey of herpetofauna (amphibians and reptiles in a given region, habitat or geological period) in a previously unstudied reserve known as Río Machay in central Ecuador-into the basis of his senior thesis.

"My experience in Ecuador reaffirmed the value and success of the education I've received at Whitman," he said. "Whether it's expressing my thoughts clearly and powerfully in Spanish or connecting the specifics of pollination biology to overall ecosystem health, I feel that I have a solid educational foundation on which the rest of my career can grow and flourish."

Jones hopes to work with a conservation-focused NGO "that would allow me to employ both my Spanish language abilities and biological/ecological education in order to help small communities become more environmentally friendly and sustainable." 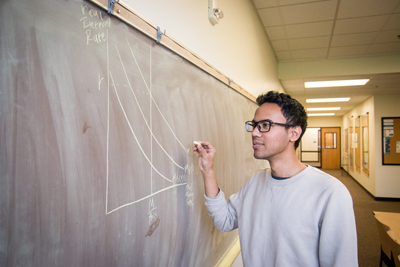 Fathi Assegaf's journey to a politics and economics double major began when his mother, who works in education policy, read about American liberal arts institutions in Colleges That Change Lives (Penguin, 1996) by Loren Pope. The family visited Whitman as part of a college tour and felt immediately drawn to the small, scenic campus.

Assegaf grew up in the teeming metropolis of Jakarta, Indonesia. Arriving at Whitman, he confronted differences that were "striking at first and sort of isolating," he recalled. "But at the same time, in the face of a homogeneous community, you find that you can explore your difference more. I think being at Whitman helped me find myself."

Head of the Muslim Student Association, Assegaf views his faith as a source of community at Whitman and "something that I use to make sense of the world." The student group, which meets for Friday prayers and an annual Eid al-Adha dinner, organized campus discussions on the Quran, which is included on the first-year Encounters syllabus. "It's validating to have literature that I grew up with in a class like Encounters," said Assegaf.

Assegaf describes his academic field as "humanities enmeshed in a social science framework." Politics and economics are "kind of in dialogue with each other, and that's my main interest in taking them together." Another benefit of the interdisciplinary approach is its "balance of ideas. You read a lot of interesting stuff, a lot of really beautiful works by political thinkers and philosophers, but at the same time, you get a sense of theory and the concreteness of real world problems and current events."

"It's funny, because politics and economics come into tension," Assegaf said. "Politics provides this framework to critique economic principles. I would go to economics class and learn all of these classical assumptions about the free market and how things operate within the world in that sense. Then my politics classes would be very much a critique of those assumptions that underpin economic calculations."

He also took Islam and Politics with Assistant Professor of Politics Arash Davari, his other adviser.

Assegaf found the course "enlightening." Davari returned the praise, calling Assegaf "diligent, smart, receptive and self-reflective. He engages with his peers and course material in genuine dialogue without compromising an admirable commitment to visions of social justice."

After Whitman, Assegaf hopes to attend law school. Belay said that he was certain Assegaf "will keep excelling in whatever he puts his mind and hands to."

"If you look back, ancient philosophers were scientists first and foremost, and scientists throughout history have been philosophers," said the biology and philosophy major from Carnation, Washington. 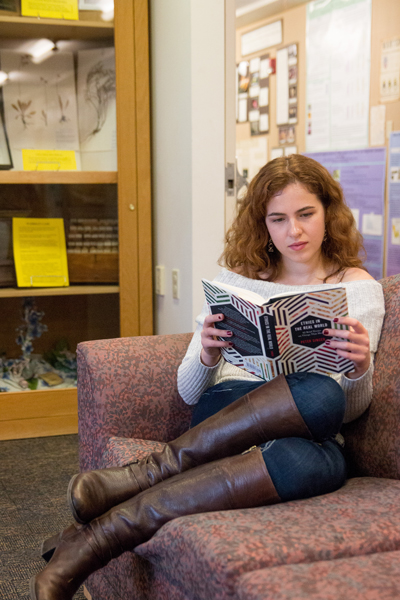 "It's only recently that we've really seen this division. Back then, you had Renaissance people, and I feel like that's the best way to conduct science and philosophy," Wilson said. She cited a class on evolution as an example of this commingling of academic discourses.

"We started the first day talking about Aristotle, Socrates and Plato, their conception of the universe and how their essentialism has influenced scientific study and scientific understanding. I really don't think you can have one without the other," she said, referencing the debate over reproductive rights for people with genetic disorders as an instance requiring both perspectives.

The recipient of a Perry Grant for genetics research, Wilson worked with Arthur G. Rempel Professor of Biology Dan Vernon on the molecular aspect of genomics, trying to create a cross-genetic plant. This semester, she is studying philosophy at the University of Oxford's Worcester College in the United Kingdom as a visiting student.

She hopes to spend a gap year after Whitman working for an organization like the Bill and Melinda Gates Foundation while contemplating medical or graduate school.

"She is bright, strongly motivated, has an inquisitive mind and effuses energetic enthusiasm for learning," said her adviser, Professor of Biology Heidi Dobson. "She is incredibly driven and very passionate about her interests and has a mind that allows her to easily and lucidly grasp concepts in philosophy and science."

The intersection between the two fields fascinates Wilson, since "science doesn't occur in a vacuum and is heavily influenced by what's going on around it," she explained. "I try to meld as many points of view as I can into my decision-making, because I think that's the only way you can come to a good decision."

This measured approach also informs her longtime participation on the Ethics Bowl team, which competes in debates around the country. During each of her three years at Whitman, Wilson has been on the squad that made it to the national championships. Associate Professor of Philosophy and Paul Garrett Fellow Patrick Frierson, faculty adviser for Ethics Bowl, also sponsored Wilson's independent study on the philosophy of biology and lauded her mental agility.

"She is committed to understanding and applying basic science that is essential for beginning to address these issues, but she is also deeply committed to the philosophical reflections that are needed to use this science well," Frierson said. "She combines a willingness to continue reflecting until she can actually see what is true and right with openness to the perspectives of others and earnestness in philosophical dialogue."

Her experiences have buoyed Wilson's resolve to see the big picture. At Whitman, "no matter what your major and whether you have one or whether you have multiple, there's this dedication to seeing multiple perspectives."