Artist statements are laser-cut into cardboard. A chest of drawers about a foot tall emits odd sounds when each drawer is opened. A 3D-printed miniature staircase-white and icy-sits next to a 3D-printed miniature sofa. A cardboard boat hangs from the ceiling with weights attached to bow and stern. Pull the weights and the boat swings to and fro while an amplifier emits watery whooshes below.

These are just some of the projects created in Assistant Professor of Art Justin Lincoln and Associate Professor of Mathematics Albert Schueller's class "Maker Spaces and Culture."

But rewind. It's the process, not just the end result that counts.

From the drawing machine.

"Getting your hands dirty with technology-tinkering with it-is really important," Lincoln said.

He and Schueller met when Lincoln first came to Whitman, "started talking about our interests, and it really has just continued from there," said Schueller.

Their discussions of technology and computational thinking led to "Maker Spaces," an unusual classroom collaboration between an art professor and a math professor.

What is maker culture? It's a relatively new movement where all types of people-not just artists-conceptualize, design and create their own objects; a movement that has been described as a social revolution where people become creators rather than just consumers.

In some ways, it's an engineering-oriented version of do-it-yourself-new technologies like 3D printing, programming and robotics are all hot topics-but remaking, repurposing or reimagining those technologies is where some of the real magic happens.

Schueller, who has taught a class on robotics and built an electric car with his daughter, says he was "probably doing it before I learned about the term." Lincoln came to the subculture through his work with open source applications.

"There's an overlap between open source programming and maker culture, and that's one of the things I'm trying to explore in this class," Lincoln said. "I think what unites those two groups is a kind of democratic ideal and a move away from black box thinking and simple consumptive culture."

This is the first time that Lincoln and Schueller have offered the class, but both have brought their interest in new technologies into the classroom thanks to Innovation in Teaching and Learning grants: Lincoln's helped create a data visualization class, while Schueller's supported his robotics course.

And although maker culture may not be simple consumptive culture, students are still consuming. Thanks to funding from the McMillen Foundation, which will support a yearlong initiative called "The Hand and the Machine," the art department recently got its hands on a 3D printer and a laser cutter. Part of the impetus behind the class was getting to know these new technologies. 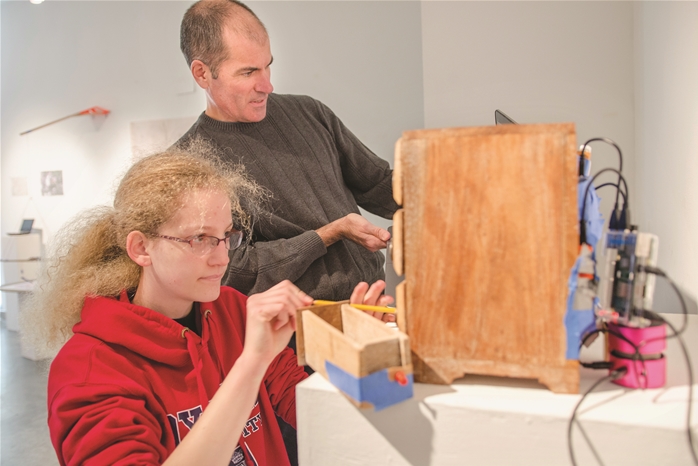 "To sell this kind of equipment, there's a huge hype machine talking about how easy all this stuff is to use," Lincoln said. "They're not going to mention how often it breaks down! But even though it breaks, it is still interesting enough that we don't throw our hands up in the air."

Part of the classroom experience also involves deconstructing and reconstituting consumer products, including a talking Elmo. This is because maker culture puts some of the agency back with the consumer, who empowers herself to decide the utility of an object.

"Once you start seeing things in terms of 'all these technologies have parameters,' well, someone [say a manufacturer] decided what those parameters are. Can I get inside it to change the parameters just a little bit?" Lincoln said.

During a visit to the class, students work in small groups on the art projects they'll complete, in this particular case, building a noise-making machine.

Lincoln determined that "four projects would be as much as we could accomplish over the semester." The first introduced 3D printing and laser cutting, while the second involved building a drawing machine. It was during this project that Schueller-who has taught programming at Whitman-introduced the students to some basic coding.

"Because programming's not a prerequisite, [this class is] more about taking existing code and understanding enough of it to tweak it to your own ends," Schueller said.

"It's more about hacking code than it is about building code from the ground up."

That coding ability, combined with their knowledge of laser cutting and 3D printing, will help students work through their noise-making project.

In today's class, they're playing with piezoelectric microphones. More commonly known as contact mics (the type used in electric and electroacoustic guitars), they pick up vibrations in different objects and transform them into sound.

One group is building a single-string guitar with fishing wire and a microphone. Another has attached a contact mic to several materials, including bubble wrap and a pull-chain from a light fixture. A third group has a bottle of water on two strings and is listening to it slosh back and forth.

The Fouts Center for Visual Arts also becomes an active participant in the class. After walking outside the building, a student attaches a mic to the siding of Fouts and taps a tattoo on the metal. The vibrations are transformed into the sound of a Star Wars laser gun.

At first glance Lincoln and Schueller's class might seem like just learning by doing or playing around, but the philosophical underpinnings are what make it different. The class discusses a recently uncovered Isaac Asimov essay-"How Do People Get New Ideas?"-about the conditions needed to foster creativity.

Lincoln asks the class whether creative people are just those who see connections where others see none. Is it all about "thought vagrancy?"-wandering from thought to seemingly unconnected thought and spotting the correlation?

Getting your hands dirty with technology is really important.

Another distinguishing factor is sharing information for those who come after you, or "paying forward."

"Part of your responsibilities when you're borrowing is to share back and to document," Schueller said.

Students blog about both their successes and their failures throughout the course. For Lincoln and Schueller, this writing process helps to better gauge the work their students are doing.

The documentation element means that you're "much more tuned into the whole thing than if someone just drops a piece in front of you and says: 'okay, what do you think?'" Lincoln said.

Schueller also stresses that it's worth remembering this is an introductory art class. The students aren't expected to go away and use only this particular method of documenting to feed their creativity.

And "that's fine. This [class] is about exposure." 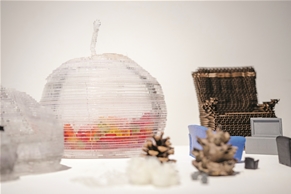 At a gallery opening in Fouts, final tweaks are being made to the students' art projects. Alongside the icy staircase and sofa is an oversized, 3D-printed apple half-filled with gummy bears (it was full at the start of the semester, Schueller said). Amps are being plugged in and switched on.

Ricky Manley '15, an economics major, is putting the final touches to his group's noise-making and drawing machines. The noise machine "was about the process," but the drawing machine was about "honing in on what exactly we wanted with that project."

Created with Brian Lewis '15, the drawing machine uses three upright dowels-each with a pen attached to the top-which pass through a tabletop and are held in place by weights. When set in motion, the three dowels, which are connected above the table, move the pens in ellipses. Pinned to the wall are the results: finely patterned swirls of mostly blue and red. Some resemble telescope images of far-away galaxies.

Schueller is hard at work with Katrina Allick '16, an art major, and Grace Pyles '18, making sure their tiny chest of drawers is making the right noise at the right time. Some have contact mics inside, while others contain noise-making objects like the pull-chain and bubble wrap they were experimenting with a few weeks ago.

Pyles is a first year and Lincoln-her adviser-had mentioned the class to her.

"It was an art class but it had to do with math. I really like art but I also really like math," she said. "It's fascinating how those two connect."

Their project is about sounds as movements through space. Blogging and documenting their work has freed Pyles to think more about the process than the end result.

"It's been helpful for me to try to put myself in the process rather than the product," Pyles said. "I really do think you learn a lot by focusing on what you're actually doing rather than on what you want the outcome to be."

The students' final project has only one stipulation: that it take them outside of the classroom or the exhibition space.

"After we're done with the exhibit, the last piece doesn't need to go in the gallery," Lincoln explained.

"So [students are] now free to approach the rest of the world in terms of being a Maker."