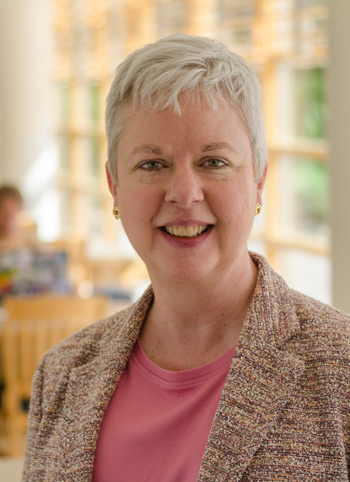 "We teach our students how to shift points of view," Senior Lecturer of Chemistry Deberah Simon '72 says in a joint profile of her and colleague Machelle Hartman on page 14 of this edition, "and when you do that, that's when the ideas come for other ways to approach a problem, which I think is what creativity is: a novel way to approach
a problem."

I like that definition quite a bit. By "problem," Simon also means "question" or "opportunity." And Whitman College embraces ideas, problems, questions, opportunities, novel ways—that is, creativity, the theme of this issue—as a matter of course. We strive to be change agents of ourselves and others.

The 150-bed residence hall and 500-seat dining commons under construction are a novel way to build more community on our already tight-knit campus. Both are scheduled to be completed for the fall 2018 semester and funded through the Living at Whitman Initiative, a $41 million project launched by the Whitman College Board of Trustees in 2015. (Future editions of the magazine will keep readers updated about Living at Whitman.)

In mid-August, the Board of Trustees approved five strategic priorities that form a road map for Whitman for the next five to seven years. Students, faculty, alumni, staff and board members participated in developing them over the past two years. The implementation of these priorities, a process that begins this fall, will spur novel approaches to defining the future of the college.

Creativity often requires a more personal expression of thoughts and emotions. Actor/writer Dirk Benedict '67 talks about this while the tribute to the late actor Adam West '51 incorporates this too. On a related note, there's now a creative writing minor at Whitman. And you'll also encounter an original poem—so, a work of art—about creativity commissioned from Katrina Roberts, Mina Schwabacher Professor of English/Creative Writing and Humanities.

Academic rigor and a deep understanding of real-world considerations go hand in hand with some of the highest impact creative endeavors—and are key values that Whitman stresses. That helps explain why Whitties received 32 major awards during the 2016-17 academic year and the Office of Sustainability received praise for eco-friendly ingenuity.

Whitman also strives to improve the campus, region, nation and world through creativity, through novel ways to approach subjects and concerns. Kaitie Dong '18 and Cassandra Otero '18 adopt causes for social justice and win awards for the progress made. Oceanographer Nancy Prouty '93 and evolutionary biologist Katie Wagner '04 not only study aquatic habitats but also safeguard them. And Assistant Professor of Psychology Thomas Armstrong analyzes the worth in the feeling of disgust.

There are numerous other examples of creativity in this magazine—and at Whitman. To be a Whittie suggests possessing many positive attributes, including being creative.