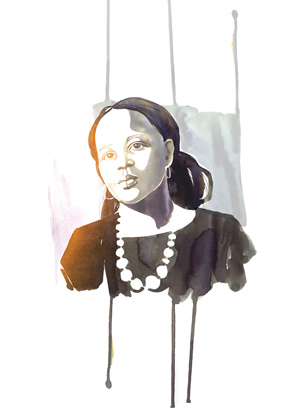 Haitian writer Edwidge Danticat will be on campus on September 10 to talk about her book Brother, I’m Dying. Danticat’s novel was selected for this year’s Summer Read Program, which asks incoming first-year students to read a specific book over the summer and be prepared to discuss it with faculty members and fellow students during their first week on campus.

Danticat, whose novels and short stories focus on Haitian families through the lens of immigration, published her first novel at the age of 25. Its nomination for the 1995 National Book Award made her the youngest ever writer to be nominated.

Brother, I’m Dying, published in 2007, won the National Book Critics Circle Award and was her second nomination for the National Book Award. A memoir and social critique, it resurrects Danticat’s uncle Joseph, who raised her from the age of four until she left Haiti eight years later to be reunited with her parents in New York City. When the 81-year-old Joseph fled Haiti in 2004, he was imprisoned by the Department of Homeland Security and died within days of his incarceration.

The New York Times called the memoir “remarkable... A fierce, haunting book about exile and loss and family love and how that love can survive distance and separation, loss and abandonment and somehow endure, undented and robust.”

In addition to Danticat’s lecture, the Summer Read Program includes a faculty panel presentation on August 29, which will explore key themes and issues from the memoir from the perspectives of different disciplines. Danticat will also attend several classes and have lunch with students while she is on campus. Her lecture takes place on September 10 in Cordiner Hall and is free and open to the public.