The project had students translating peer-reviewed research and facts about current political issues not into another academic paper, but instead into an opinion piece, or op-ed, targeted at a newspaper audience. 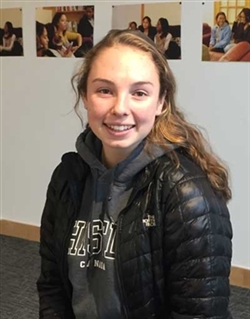 “Pivotal to a liberal arts education is being able to think critically about statements of fact, which is a new concept for many students who have come of age in this era of so-called ‘fake news’ and ‘post-truth,’” said Santana-Acuña, who has published pieces in The New York Times and Spain’s El País. “Op-eds are an excellent way to teach students how to construct a powerful argument on a current topic that may differ from general consensus, how to support one’s argument with concise language and reliable data, and how to make it accessible to large audiences.”

Politics major Sarah Bosworth ’21 chose to write her piece on ballot readability after participating as a voter for the first time in the midterm elections of 2018.

“After carefully reading through my ballot, I found the phrasing of many initiatives confusing,” Bosworth said. “I wondered if most Americans, especially those who are not native English speakers or did not have the opportunity to go to college, were able to fully comprehend their ballots. I believe ballots should be written so that voting is more accessible to all Americans.”

Nine months have passed since the last general election, and most Americans still don’t understand what they voted for.

Congressional representatives, the midterm ballots gave Americans the opportunity to approve or vote down hot-button issues, such as whether to raise the minimum wage, lower taxes, impose new laws or discard old ones. The ballots presented information in a concise, easy-to-read format, allowing voters to easily decide which measures they support.

At least, ballots should do this.

In fact, the average American ballot in the 2018 midterm elections had a readability score of 19-20, according to the Flesch-Kincaid Grade Level (FKGL) readability test. This test measures how many years of education are required to read a piece of text. On the FKGL scale, a score of 5 would mean a fifth-grader could understand it, while a score of 20 means that a person would need 20 years of formal education.

Twenty years of formal education puts a person in graduate school, a level which only about 9 percent of Americans over the age of 25 have. The National Center for Education Statistics measures the average reading level of people in the United States at eighth grade. This number drops for people who did not attend college, finish high school, have English as their second language or who are not fluent in English.

Everybody should be able to read their ballot. Right now, a majority of Americans cannot, putting American democracy in jeopardy.

Studies have found that when Americans do not understand a ballot measure, they are more likely to just skip it. According to a University of Virginia study, more than 30 percent of Americans do not complete their ballot, and when less than half the population votes, these incomplete ballots hurt the ability of Americans to exercise their right to vote.

So, where do we go from here? The situation is a bit ironic: in order to change how ballots are written, a measure would have to be voted on by ballot. This is a ballot battle worth waging.

We must hold our representatives accountable for making sure ballots can be read by as many people as possible. Voters can also use websites like Vote.org, Ballotpedia.org, Vote411.org and HeadCount.org, among others, which promote participation in democracy. We can organize community efforts around election time that will encourage voting and explain the measures in a non-partisan manner.

Voting is not a privilege, it is a right of every American citizen. Their ballot should be the means by which they exercise that right — not the very thing stopping them from doing so.