From Whitman in China to a successful career as a translator and professor: Karen Kingsbury ’82 sees the written word as an important part of cultural exchange. 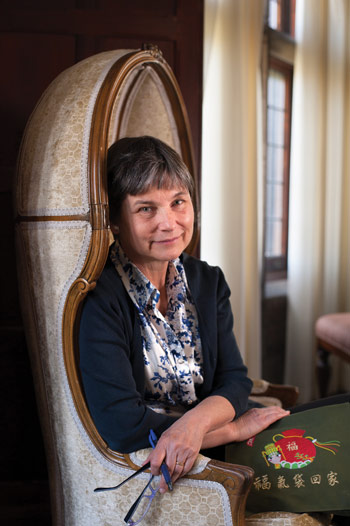 During the Japanese occupation of China in World War II, Shanghai is stilled by air raids. A man and a woman on a stopped tram meet, talk, then separate. That’s all; that is the whole plot of Eileen Chang’s “Sealed Off,” a short story from her 1943 collection Love in a Fallen City.

Nothing much happens action-wise. And yet, when we reach the end of the story and the tram begins to move again, the man and the woman have shared a moment totally public but somehow more intimate than either knows what to do with. We realize we have been made to understand something new about what it means to be human, to be alone, to love, and that, in some way, everything has happened.

“Sealed Off” is available to English speakers in part because Karen S. Kingsbury ’82 felt a similar connection upon first encountering Eileen Chang. Though only a few pages long, the story is such a richly woven tapestry of gesture and grimace that it’s familiar to a Western reader despite the extraordinary geopolitical circumstances of the characters.

“I had read some of [Chang’s] work in English,” said Kingsbury, now a professor in international studies at Chatham University in Pennsylvania, “a translation she herself had made, and it didn’t really grab me. But then I started to read her in Chinese. And I was just swept away.”

That literary spark started a fire: Kingsbury’s translation of Chang’s classic Half a Lifelong Romance was released this March to rave reviews, that novel the most recent in a long line of Kingsbury’s translations of Chang’s essays and stories. Before that came 14 years teaching at Tunghai University in Taiwan, a Columbia University dissertation on Chang and, back at the beginning, a year teaching English in Chongqing with the Whitman in China (WIC) Program.

“It really does all start with Whitman,” Kingsbury said. “Whitman—then and now—is very much one of those crossroads to the world. Even though it takes some effort to get to Walla Walla, once you get there, the doors open up in all directions.”

Kingsbury majored in English with minors in French and political science, and she was part of the second group to embark on the WIC program in 1983. She and three others traveled then to Chongqing, Sichuan Province, where they taught English language and American culture classes at the Sichuan Institute of Foreign Languages.

WIC was established in 1982 by the late Professor of History David Deal to explore the possibilities of a slowly-opening China through international exchange. The program, which sends Whitman alumni to teach in China and brings a promising Chinese student to Walla Walla for a semester each year through the China Sherwood program, initially established relationships with universities in Yunnan and Xi’an provinces. It has since evolved to include partnerships at Shantou University in Guangdong Province, Northwestern Polytechnical in Xi’an, and Yunnan University.

Kingsbury had spent a semester abroad in Europe while still a Whitman student, and so knew she was interested in international studies; then, during the 1982-83 year, she found herself on the receiving end of letters from both her younger sister who happened to be studying in Taiwan and Juliette Duara ’82, a close friend who had jumped on the inaugural WIC program and was then in Yunnan.

The summer before her trip to Chongqing, Kingsbury lived with her sister, both of them studying Chinese at the University of Washington. But Kingsbury experienced a dearth of information available on what she could expect in mainland China. She investigated all the same, as one might expect a future scholar would investigate: by scouring the libraries for any information at all.

“In 1983 China was… not exactly on the map,” Kingsbury said. “Almost nothing was out there about contemporary China, about what daily life was like. [Preparing for WIC] was a huge step into the unknown.”

Not even knowing what she didn’t know, Kingsbury steeled herself for an experience that might be lonely, difficult, unpleasant. What news she was able to find, largely from a string of newspaper correspondents based out of Beijing, was not encouraging.

“It was a fairly negative assessment of life in China,” she remembered. “I thought I might have to be tough, I thought I might be very socially isolated. And because I had enough information about the Cultural Revolution, I thought people would be forced to see me as an enemy.”

And was that the case in her experience upon arrival in Chongqing?

At this question, Kingsbury stopped. Her eyes welled with tears as she recalled 30 years of memories. She shook her head.

“The people were—the people were so kind,” she said. “They took me into their family lives. The students adopted me. They basically took me in as an elder sister. They’d take me off on picnics; somewhere in my files is a black-and-white photo of a young Karen made up to look like a Chinese girl to perform in a kind of skit with students. It was all really about goodwill. I didn’t feel social barriers.

“It was a very, very warm time. It changed my life.”

Upon returning to Seattle, Kingsbury found she couldn’t shake China.

“I had a sense I wanted to keep in touch with China, but didn’t have the literacy to qualify for an east Asian studies dissertation,” she remembered. Instead, she began a doctoral program in comparative literature at Columbia University, working with important scholars like Professor C.T. Hsia, whose seminal A History of Modern Chinese Fiction (1960) catapulted Eileen Chang into the Anglophone conversation on critical Chinese literary voices for the first time.

Reading Chang as a graduate student, Kingsbury knew she’d discovered something she wanted to share with the English-reading world.

“I felt I had found the writer I could take to any English department and say: here’s a writer whose literary sensibility, stylistic elegance and psychological insight will interest you. I was looking for a writer who would be interesting to someone with no prior connection to China.”

Chang is among the most influential modern Chinese writers, her fiction portraying characters who navigate love amid a backdrop of war, In doing so, they make small-scale, everyday life in 1940s’ Shanghai or Japanese-occupied Hong Kong thrillingly accessible to Anglophone readers.

As Kingsbury said, “Eileen Chang was different; she carried enough of her world into her work.”

And that world is vivid in translation. Chang’s Shanghai in “Sealed Off,” collected in Love in a Fallen City, for example, is a visceral beast:

The huge, shambling city sat dozing in the sun, its head resting heavily on people's shoulders, its drool slipping slowly down their shirts, an inconceivably enormous weight pressing down on everyone.

Or take the way that story’s third-person omniscient narrator flits from consciousness to consciousness in a stuck tram, settling finally on an everyday woman named Cuiyuan. After a description of the young woman’s ordinariness, we get this character-revealing gem:

Life was like the Bible, translated from Hebrew to Greek, from Greek to Latin, from Latin to English, from English to Mandarin Chinese. When Cuiyuan read it, she translated the Mandarin into Shanghainese. Some things did not come through.

Multiple layers of translation persist in Chang’s work, and in Kingsbury’s. Kingsbury has spoken with other news outlets about the difficulties inherent to Chinese-to-English translation; there is a great deal of art, of massage, that a skilled translator brings to the process. In an interview with the blog “Conversational Reader,” she elaborated:

“But the most difficult items are always the allusions and puns, especially if they are used ironically or as part of witty repartee. In cases like that, I spend an inordinate amount of time searching for something that will replicate the experience for the English-language reader, and usually have to give up anyway.”

Kingsbury, who eventually returned to the United States for what she called the “very Chinese reason” of caring for family, now teaches Asian studies and world literatures at Chatham University, including a course on postmodern and modern China and another on Asian literary migration.

“We talk a lot about the origins of Vietnamese-, Chinese-, Indian-American writers,” Kingsbury said, noting that Eileen Chang, despite being widely admired during the first half of her life in Shanghai, ended up reclusive and invisible in the United States in the 1950s.

“It’s important for Americans to recognize the invisible writers in our midst, especially when they’re immigrant writers,” she said.

For her next project, Kingsbury has decided to write a biography of Chang. There is nothing full-length in English about her life, she said, though in Chinese there are probably six or seven biographies.

Chang makes for a compelling subject: her descent from a Qing Dynasty court official, her opium-addicted father and foot-bound mother, her imprisonment in her own room for six months as a teenager. War kept her from studying in England, then Hong Kong, and she eventually emigrated to the United States, where her output slowed and she died alone.

“[She was] a writer who really stood in Shanghai in the 1940s,” Kingsbury said. “A breakout writer who, in a stable political circumstance, would have become very well known.”

Although Chang is not yet widely known to English language readers, Kingsbury hopes to change that with her translations and eventual biography.

Though she doesn’t get back to Walla Walla very often, Kingsbury spoke warmly of her Whitman education, which set her on the path that led her to China and to Chang.

“Walla Walla is the navel of the earth,” she said. “From it, students carry with them something Whitman College has given them, which is an empowered curiosity, strengthened by serious study. I hope that students also carry with them a kind of small-town humility, even if they come from larger places.” Take that humility with them, she said, and “you’ll be carrying the best of the Whitman spirit with you always.”