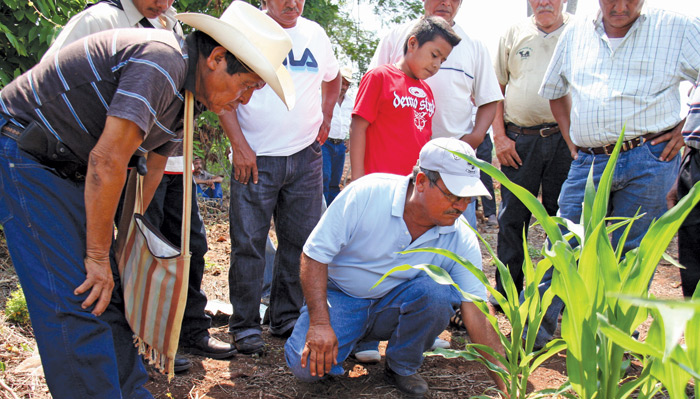 Social entrepreneurs are not content just to give a fish or teach how to fish. They will not rest until they have revolutionized the fishing industry.

The question existed long before Curt Bowen ’08 started asking it—but once he started, he never stopped:

What is the best way to effect real change in the world?

That question eventually led to the founding of Semilla Nueva—New Seed—a nonprofit that took root in Guatemala in 2010. Semilla Nueva is dedicated to arming farmers with techniques for sustainable agriculture, diversification of crops, increased food security—all the tools they need to pull themselves out of poverty.

The organization has been so successful that Bowen, the executive director, was recognized on Forbes’ most recent “30-Under-30” social entrepreneurs list (he’s 28) and chosen as an Ashoka Fellow, one of an elite group of innovators supported by the Ashoka Venture in the pursuit of social change. Semilla Nueva’s budget has increased from $17,000 per year to $300,000 and its technologies—training farmers how to collect data from experiments with new crops on their land, monitoring and evaluation of new techniques’ effects—now reach thousands of families.

As a rising Whitman sophomore in 2005, Bowen asked how best to change the world when he traveled with seven friends to Nicaragua to build a house for a woman who had lost her husband—and income—in a fishing accident. He asked it again when he spent a summer introducing small-scale biodiesel processors to Central American communities after cofounding Whitman Direct Action, a student group concerned with environmental sustainability and socioeconomic justice. He asked it in his philosophy classes, of his like-minded peers, of the people in his Idaho hometown.

At first, the answers were unsatisfying. You could never build enough houses; you might as well just give a man a fish. The biodiesel technology sparked some interest, but in the end wasn’t scalable; you teach one man to fish and he’s fed for life, but what about friends of his friends, their friends, their families?

“I wanted a lot more out of it—all these ideals we’d talked about,” Bowen said. “But [those trips] showed all of us what we could do.” Real change, the kind he wanted, would require revolutionizing the fishing industry itself.

Joseph Bornstein ’08, Bowen’s best friend and partner in activism since their first week at Whitman College, remembers their approach: “We agreed that in many developing countries, agriculture really is the keystone—it employs the majority of the population, is the number one driver of environmental destruction and is a critical part of that country’s economic portfolio.

“We also saw that if you can hit the point of agriculture in [terms] of self-sustenance and environmental stewardship, that can empower a whole community,” Bornstein said.

So, after graduation, they asked the question again, louder. This time, the search for the answer took Bowen to Guatemala, where agriculture is the backbone of the economy, where the students had good contacts, spoke the language and saw plenty of opportunities for change. There, Bowen and Bornstein co-founded Semilla Nueva.

Their work began in the wake of a civil war that lasted nearly 40 years. Until 1996, Guatemala had suffered a too-long succession of military dictators bent on erasing the rural poor; tens of thousands were “disappeared,” hundreds of villages massacred, indigenous groups terrorized. When peace finally settled, it did so on a country that had lost as many as 200,000 of its people.

Guatemala is still recovering. The United Nations’ Human Development Index ranks the Central American republic 125 out of 187 countries in terms of life expectancy, education and income. Deforestation may be leading to increased flooding and drought. Seventy percent of rural farmers live in poverty and half their children are malnourished.

“You can’t solve everything at once, but we saw that if we addressed agriculture, that could really be the foundation,” Bornstein said.

“Guatemala is not an underdeveloped country for no reason,” said Bowen, citing deeply embedded organizational and cultural problems. “The point is, you have to actually recognize that, accept it and figure out what you can do—you have to actually become a stakeholder.”

By living there long enough to become a “second citizen,” Bowen was able to take the temperature of Guatemalan agriculture on the ground: farmer-to-farmer education was not a part of the culture; some of the widely-used farming techniques like field-burning, were ruining the soil; a heavy emphasis on corn in the people’s diet was a driving factor in sky-high malnutrition rates.

You can't solve everything at once, but we saw that if we addressed agriculture, that could really be the foundation.

The Semilla Nueva team, which initially consisted of just a few volunteers, started out with the idea of introducing pigeonpea, an unassuming little legume that could be planted between rows of corn that were being planted anyway. Pigeonpea is high in protein, drought-resistant, doesn’t take up any extra space on the land and helps rebuild soil; it had had success in Eastern Africa, and seemed the perfect place to start.

Five years later, SN has a staff of 15. Eight of the staff work directly with farmers, helping them to set up experiments on their land and analyze the results, and the rest deal with the Guatemalan government, monitor and evaluate SN projects and share research. (Bornstein is no longer with the organization, though he follows its progress closely.) The key to Semilla Nueva’s success has been its ability to adapt and change over time in response to the needs of the communities it serves, according to Bowen.

“There’s a lot of analysis in the social entrepreneurship world that talks about how you have to go through a number of iterations [of an idea] before you come up with something that can really make a difference in peoples’ lives,” Bowen said.

SN’s work with pigeonpea, for example, is now on its third iteration. It turned out not to work so well as a replacement for corn in peoples’ diets, but what did end up catching on is pigeonpea as chicken feed, used to help farmers increase their poultry product yields. Certain varieties of pigeonpea could also be used as firewood.

SN has also devised other ways to address malnutrition problems in a culture dependent on corn for calories. First, a variety of corn called Quality Protein Maize (QPM) looks, tastes and acts exactly like the corn that farmers are used to growing, but is full of protein. Last year, SN got 150 families to replace normal corn with QPM, and more than 1,000 families tried it; more than 500 families have signed up to try it in 2015, and SN hopes to work with the government to reach 10,000 by 2017. Bowen predicts consumption of QPM will have a huge impact on the growth rates of children. There’s also “tree spinach”—the leaves of the native chaya tree—which turn out to be packed with protein and nutrients.

Farmer-to-farmer development is another important component of SN’s work. The staff teaches farmers how to, for example, plant pigeonpea between rows of corn on small pieces of their land, then how to analyze the results of their experiments scientifically and evaluate their results. SN then encourages the sharing of results from farm to farm, spreading good ideas within pre-existing communities.

“The idea is to have methodologies and technologies that are human-centered. All of Semilla Nueva’s technologies and approaches, a farmer could take full ownership over, rather than feeling there’s some foreigner just coming in and telling them what to do,” Bornstein said.

Semilla Nueva trains some of the agricultural trainers at the Guatemalan Ministry of Agriculture, and has already brought together leading Guatemalan organizations in the hopes of designing national research strategies. The organization is also building a new experimentation and training center to strengthen the scientific analysis of its own methods and advocates for farmer-to-farmer development and sustainable agriculture techniques all over the world. SN has been supported by Rotary International grants in 2013 and 2014 (Bowen is a Rotarian), donations and, more recently, grants from the U.S. and the Guatemalan governments.

Bowen has now lived in Guatemala for six years. “We’re finally getting to the point where what we’re doing is starting to catch,” he said.

“It’s a tendency of all young adults not to stick with a question long enough,” Burgess said. “But Curt was like a dog with a bone, [in terms of] intellectual persistence. He was interested in the questions themselves—in what is the case rather than what do I think.”

Bowen, for his part, defers to the Roman philosopher Seneca: “Luck is what happens when preparation meets opportunity,” he quoted. “The most important thing you could come out of Whitman with would be the right combination of obstinacy and humility. Whitman is so great about teaching you to find the things that you love—it’s like happy camp—but then to follow a thing you love is so much work, so much suffering, you have to just keep at it. And be humble.”

Humility, willingness and ability to adapt to changing circumstances: these traits will serve the future of Bowen’s organization well, in his old friend Bornstein’s opinion.

“I think Semilla Nueva has a fantastic model,” said the former Watson Fellow, who has seen the inner workings of many nonprofits during his travels. “Curt has dedicated himself uncompromisingly to Semilla Nueva... Bottom line: he’s a brilliant guy, and he’s been able to take Semilla Nueva from a nonprofit that was just beginning to make some serious impact to this whole other level. He’s a major player in the world of sustainable development.”

Semilla Nueva has plans to expand its board of directors outside of its current Boise, Idaho, boundaries, possibly to include Seattle or Portland. Bowen said that finding people to guide the nonprofit who are based in the U.S., where SN doesn’t currently have any staff members, is critical to its success. The organization welcomes inquiries from interested parties.