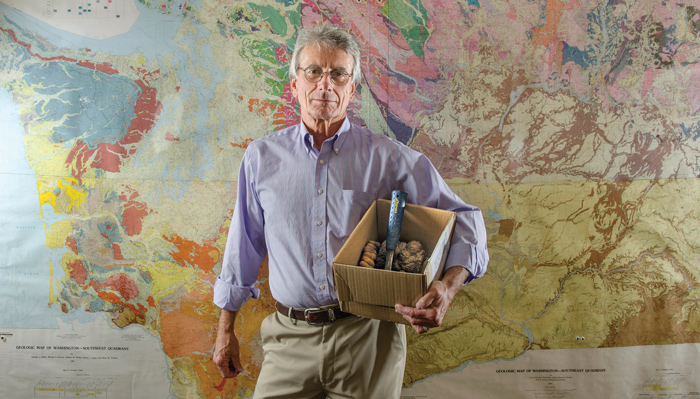 Pat Spencer
Interim Provost and Dean of the Faculty

A 40-inch piece of “coprolite” made headlines selling for $10,370 at a Beverly Hills auction house. Geologists like Pat Spencer, who studies look-alike minerals, are skeptical.

Whitman Magazine: Why use the word “coprolite” rather than just calling it “fossilized feces” or “animal dung?”
Pat Spencer: Every science has its own language. It makes us feel like we’re talking about stuff that no one else could possibly understand.

You told National Geographic that you didn’t believe the 10-grand piece of poop is actually coprolite. Why?
To be fair, I don’t know if the one purchased [at the Beverly Hills auction house] is real or not, but the sample in question came from Wilkes Formation in southwestern Washington State. I have a collection of 50 or 60 samples that look similar from the same location stored in the science building. I’ve never found one that showed any of the telltale signs of coprolites.

What kind of information do coprolites hold?
If real, it would give scientists trace evidence of whether the animal was a carnivore or a herbivore. It might shed some light on feeding habits and diet. That’s information not usually available. You know, when a wolf or other carnivore dies and is fossilized, you don’t get the internal organs. Studying coprolites is a way to flesh out and reconstruct ancient ecosystems.

How do you find out if one of your samples is a real coprolite or not?
The animals usually blamed for these so-called coprolites are large aquatic reptiles. Now, crocodiles eat by grabbing on to something’s leg and twisting until it comes off and then they swallow it. When it comes out the other end it’s usually the stuff that they couldn’t digest. None of the ones I’ve looked at from this area – cut into – have showed anything inside.

What’s inside your collection?
What they are made of is a mineral called siderite, an iron carbonate, which is a really common mineral precipitate in swamps.

If a 40-inch sample sells for $10,370, how much is your collection worth?
That’s a great question. The one that was sold at the auction house was about $250 per inch. If I was to sell my collection at that price per inch it’s probably worth $30,000.

Did the private collector waste his money?
That’s not for me to decide. It’s a beautiful specimen, it’s just probably not what it was advertised to be. Someone who spends $10,000 on something like this probably has a lot of disposable cash. There’s all manner of things people will spend money on. But the part that I didn’t like was that the auction house advertised it as dinosaur dung. The age of this swamp deposit missed the dinosaurs by about 50 million years. So at that time, among other issues, the dinosaurs were all extinct, so clearly it wasn’t that, but the auction house took it at face value – looks like scat, must be scat.

You’ve transitioned from teaching geology to serving as Interim Provost and Dean of the Faculty. What do you miss most about your old job?
I was in the geology department for 29 years. I miss the interaction with students. I’m fond of our undergraduates; I love teaching them. And that’s geo majors as well as non-majors who would take my course. The value of teaching geology is that regardless of whether students become geology majors they never look at the world in quite the same way.