Rob Manning ’80 has traveled millions of miles from the wheat fields of Eastern Washington where he grew up to the surface of Mars. As flight system chief engineer at NASA’s Jet Propulsion Laboratory, he and his team design the rovers that make the celestial journey to the Red Planet. 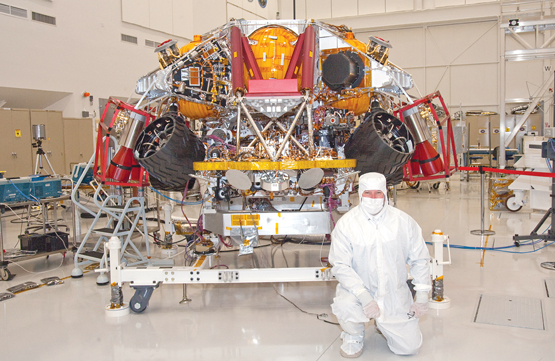 Rob Manning ’80 takes a knee in front of the rover Curiosity, which is stowed under the descent stage (the rover’s backpack). The descent stage will hover over Mars, lower Curiosity with tethers to the surface of the planet then land safely off to the side. (Photos courtesy of NASA/JPL) 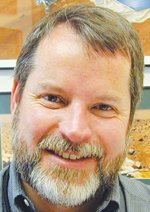 Rob Manning ’80 has been to Mars. Well, not in person, physically. The chief engineer said his eyes and hands have piggybacked to the red planet on the various Mars rovers he has helped design.

“These rovers are not robots,” Manning said, referring to the automated motor vehicles Sojourner, Spirit, Opportunity and Curiosity, the latter of which is currently rocketing to the Red Planet and is expected to touch down early August 2012.

“The rovers are appendages of us. Like a telescope or microscope becomes part of us and extends our own senses. I’m staying in Pasadena, but my eyes and hands are going to Mars.”

Manning has experienced the thrill of watching his creations land on Mars and explore the planet’s rocky, red surface, delivering otherworldly images back to Earth. It’s a transcendent event.

“We’re going where no one has gone before,” he said excitedly. “We are the first travelers putting down the first footprints on these planets. Those are not human footprints, but they are as human as we can be.”

When Manning thinks about the technology used and the myriad systems that must be stitched together for these rovers to function on a different planet, he admits he sometimes has a difficult time wrapping his head around it.

“I look at these systems we’re building, and I’m amazed they work,” he said, equating his team to a group of artists patching together a massive collage that turns out to be a rover like Curiosity, which can take images, collect samples, analyze data and navigate the ultimate off-road terrain that would make any Hummer owner envious.

“There’s an ever-present sense of enforced humility that goes with creating these rovers. Sometimes there’s too much for us human beings to grasp.”

Exploring the far reaches of our vast universe inspires awe and childlike wonder. What fuels such exploration? Manning answers this question and more:

Rob Manning: The level of curiosity over the ubiquitous nature of life in our universe has grown overwhelmingly. Twenty years ago, you’d be hard pressed to find scientists who would say life exists outside our planet. It’s still an open question, but life is everywhere on our planet, under rock, underground, at the bottom of the ocean. We know life has much fewer constraints than we first thought. All of these things have led us to think our cousins, single-celled organisms, are out there waiting to be met by us. Mars is the easiest place to land and explore, to find out whether or not life – single celled organisms – ever took hold on that planet.

Whitman Magazine: Is there life on Mars?

Manning: Mars is screaming at us. We now believe that on Mars, briny water can flow at very cold temperatures near the surface. There’s every reason to imagine that hidden from the harmful rays of the sun, living things might be close to the surface or buried in rock. If not today, then perhaps billions of years ago when Mars was much more Earth-like, life may have taken hold and left telltale imprints or residue. With Curiosity we can dive a few centimeters into that rock, and possibly find those imprints or that organic residue.

WM: What would it mean for us if Curiosity found life on Mars?

Manning: Curiosity is not designed to find living things but the shells of living things. The residue of life’s history. If we were to find out life was there, I’d ask one very important question: “Is that life constructed in the same way and with the same rules life was constructed on our planet?” If life on Mars was built on left-handed molecules, we would see that it’s not related to life on Earth. It would change our perspective, wildly suggesting that life could pop into existence independently on many planets. If life there looked like ours, it would tells us life moves around planets. That amino acids or long complex organic molecules that form the basis of the building blocks of life here on Earth might have come from other planets. Maybe life is something that just goes with our universe.

WM: You mentioned earlier that the technology used on rovers is very complex. Do these robots ever fail?

Manning: Yes. It’s about a 50-percent success rate. Success is by no means an assured outcome. In all cases they’ve failed because of our limitations as human beings. There is no such thing as a nonhuman error. No such thing as a computer error. Computers can be wrong or broken, but that means a human being made a mistake. It goes back to the intrinsic limitations of human beings to know everything we need to know.

WM: How much imagination versus scientific engineering is used to create a rover?

Manning: Imagination is huge. This work requires visualizing how things come together and what the consequences are of certain things happening. You can design a system so reluctant to do anything wrong that it doesn’t do anything right. For example, it takes work to tell our rovers to drive off a cliff. They have eyeballs and can notice when there’s a steep ridge, so they stop in order not to crash. There is a balance between fear and boldness woven into the robots. It’s the same balance we face as humans. We go on an adventure full of excitement, which can propel us forward, but also filled with dread at what bad things could happen, which can hold us back. It’s a balancing act. This makes engineering these systems a very human enterprise.

WM: What do you imagine is next for Mars exploration?

This artist’s concept depicts the rover Curiosity, of NASA’s Mars Science Laboratory mission, as it uses its Chemistry and Camera (ChemCam) instrument to investigate the composition of a rock surface. ChemCam fires laser pulses at a target and views the resulting spark with a telescope and spectrometers to identify chemical elements.

Manning: Sample return. There’s a lot of hope that we’ll be able to make remarkable inroads in understanding the life history of Mars. The stuff that comes after in many respects, the biggest one scientists want to do, is to go to Mars and bring samples back to Earth. We’ve been working on that problem for a long time. We think we have our arms around the challenge of how to do it.

WM: How did you venture from the wheat fields of Eastern Washington to outer space?

Manning: Walla Walla and Whitman are great places to learn about the wider world. I felt privileged to go to Whitman College. I worked very hard, and I could study both liberal arts and engineering. I count my years at Whitman as my biggest educational experience, because that’s where my most intense memories come from. It’s where my world opened up. Being curious is a wonderful attribute, but you need things to satisfy that curiosity. Whitman College provided that for me. WM: Stargazers look upon the heavens with wonder. In your line of work, do you feel the same way? Manning: I see the planets and stars as places. It’s like looking at a big wooden fence in your back yard. Your yard is your world. The stars are points of light, suggestions of something beyond the cracks in that fence. I know what it’s like to fly over that fence and see other yards. These planets are real. We can stand on them. Those of us involved with these missions feel that we can be there. Even the most distant star shining from the other side of the galaxy, it’s a place we can go. It will just take longer for us to get there.

The area within the white square is Gale Crater, and the yellow circle is Curiosity’s landing zone, which is 12 miles across. The crater straddles the dichotomy boundary of Mars, which separates the broad, flat and young northern plains from the much older and rougher southern highlands. There is evidence that water may have flowed across this topographic boundary, from highland to lowland, perhaps pooling locally within Gale Crater and forming the lowermost strata that fill the crater. Gale Crater is 96 miles in diameter and holds a layered mountain rising about three miles above the crater floor.

Find more information about the Mars Science Laboratory and Curiosity at mars.jpl.nasa.gov/msl.