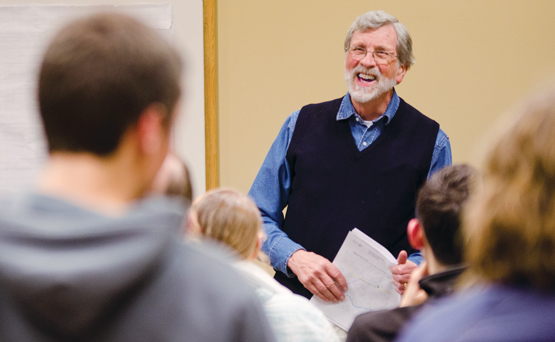 At the height of the civil rights movement, Jim Owens ’66 left the safe confines of Whitman’s campus to register voters in Georgia, where he wound up learning about civil disobedience from Martin Luther King, Jr. Owens visited Whitman in February 2012 and shared his six rules for living life as an activist: listen up, have courage, act on your values, learn from others, teach others and no “what ifs.”

Whitman Magazine: What was it like being trained by Martin Luther King, Jr. on how to community organize and demonstrate peacefully?

Jim Owens: It was a combination of awe and having a window opened up for me. To hear someone who was as powerful as Martin Luther King, Jr. speak about the non-violent process and talk about the rights of people to have everything I already had was an eye opener. The leaders who spoke to us – Martin Luther King, Jr., Rev. Ralph Abernathy and Julian Bond – had their lives on the line, and they were taking the time to talk to us students.

WM: An understatement to say that those were tumultuous times, but did you ever feel threatened?

Owens: I first stayed with a widowed black woman, on a main street in the black section of town. One morning I woke up, looked outside and there she was sitting on the front porch with a shotgun in her hand. I was like, “Holy moly.” She was protecting me because I was being threatened by the white element of town. Later, I was moved deeper into the black community to where the white cops didn’t go. Everyone thought I needed more security.

WM: How did this change your life?

Owens: It gave me the courage of my convictions. I learned if you act on those convictions you can affect society. Since that time I’ve worked on many conservation issues. I helped write a bill, and lobby it through the U.S. Congress, expanding the Siskiyou Wilderness in Northern California. None of that would have happened without the opportunity to learn what it took to be a community leader and organizer. It provided me a model and a template that I have incorporated into my life.

WM: In January, Whitman students volunteered to teach civil rights lessons in the local schools. How did this student action compare to your past?

Owens: Obviously the issues we worked for in 1965 and 1966 have not been totally solved. Not just in the South, but across the country. Racism is still present, so this program was an opportunity for Whitman students to help kids understand that there is still a need to fight for equality.

WM: Why was Whitman the perfect college to participate in the program?

Owens: Whitman offers a safe opportunity for students to go out into communities and explore the world, and then return to mull their experiences over by talking to fellow students and faculty. That’s the hallmark of a small, progressive community like Whitman. It lets students explore their lives.