When bulldozers threatened a 10,500-year-old archaeological site in Jordan, anthropology Prof. Gary Rollefson, along with two Whitman students, came to the rescue. 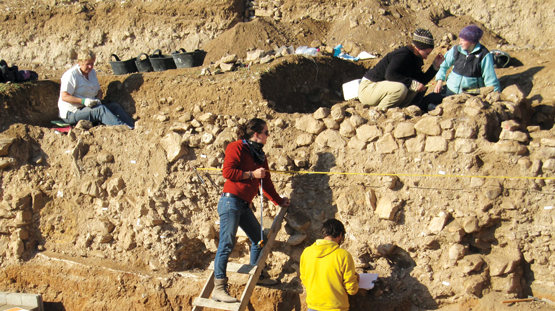 Janaki Phillips ’14 (in red) and a Jordanian student draw the exposed architecture in the bulldozer section. Elizabeth Hambleton ’13 (in turquoise and black) works in an area where human remains were found. (Photo courtesy of Gary Rollefson)

Excavations at the ’Ain Ghazal site in 1985 uncovered plaster statues, including three two-headed busts. It is unknown why the statues were made with two heads.
(Photo courtesy of J. Tsantes / Department of Antiquities of Jordan)

Of all the developments in the long process of human cultural evolution, the one with the most profound consequences was the emergence of farming and herding, a revolutionary change in the relationship of people and the environment and, just as importantly, how humans interacted with each other. While agriculture was independently fostered at different times in several parts of the Old and New Worlds, the “Neolithic Revolution” began in the eastern Mediterranean area (the “Fertile Crescent”) about 11,000 years ago. 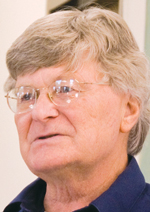 One of the most important sites that document this revolution is ’Ain Ghazal (“Spring of the Gazelles”), a 35- to 40-acre farming village near the capital city of Amman, Jordan, that was established about 10,500 years ago. The village continued to grow until local climate change and human-induced environmental degradation caused ecological havoc, reducing the local environmental situation to the point that, after 2,500 years of continuous occupation and growing cultural complexity, the town was finally abandoned because the local fields could no longer support the community. Among the impressive features at ’Ain Ghazal was the creation, almost 10,000 years ago, of plaster statuary, a panoply of mythical ancestors that dominated the religion of the time.

It was with considerable trepidation that I received a phone call while in Amman last summer, informing me that I should drive to the Neolithic site immediately to witness the bulldozing of a large portion of this archaeological treasure. The Ministry of Education had noticed a large open space that seemed ideal for the construction of a new school, and is so often the case, there was no inter-ministerial communication web that would have notified the education minister of the nature of that desirable property. With the help of the Department of Antiquities and the Ministry of Tourism and Antiquities, we managed to stop the destruction, but only after about five or six acres had been totally removed from the archaeological record.

With the financial backing of Whitman College and the American Center of Oriental Research (the principal archaeological institute in Amman), two Whitman students – Elizabeth Hambleton ’13 and Janaki Phillips ’14 – and I spent the winter break at ’Ain Ghazal in an attempt to salvage as much of the information as we could. With the help of several volunteer students from San Diego, Great Britain and Jordan, we spent three and a half weeks excavating along the face of the bulldozed terraces, sampling exposed architecture and isolated features and recovering the skeleton of what appeared to be a young woman buried in the corner of an abandoned house dating to around 6,000 B.C.E. The woman was lying on her right side, with legs flexed and both hands placed under the right side of her face, mimicking someone who had gone to sleep, this time forever. The burial was from the Pottery Neolithic period, a time when ’Ain Ghazal’s fortunes had already begun to falter substantially, and we hope that our osteologist at Yarmouk University in northern Jordan will be able to provide us with information concerning the woman’s health, possible nutritional stresses and perhaps even cause of death. 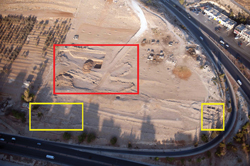 This is an aerial view of the western side of ’Ain Ghazal. The areas bounded in yellow are trenches excavated in the 1980s and 1990s; the red lines surround the area bulldozed in July 2011.
(Photo courtesy of David Kennedy/APAAME)

Although the information came at great cost both literally and figuratively, the bulldozing did add considerable information to what we had achieved from our formal excavations during the 1980s and 1990s. For one thing, ’Ain Ghazal was much larger in the last millennium of its existence than we had estimated. ’Ain Ghazal was what is known as a “megasite” in view of the vast expanse of the settlement between 8,500-7,000 B.C.E., but ’Ain Ghazal (and all other megasites in the area of southern Syria, Israel and Jordan) collapsed around 7,000 B.C.E., and we had calculated that population had dropped from about 3,500 inhabitants to only about a tenth of that figure within a few generations. At the same time, the town decreased in its area from 35-50 acres down to only five to seven acres. 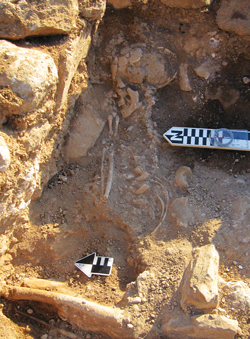 Researchers uncovered the skeleton of a woman who died around 6,000 B.C.E. It was found in the corner of a room. An osteologist will use bone samples to provide information on the woman’s health, and may discover how she died more than 10,000 years ago.
(Photo courtesy of Gary Rollefson)

Based on what we were able to investigate, the decline was not so dramatic, and perhaps as many as 500 people occupied the latest version of the village that covered around 10 acres. The quality of architecture also appears to have improved in terms of size, number of rooms and flooring (chalky plaster instead of beaten earth) across the last 500-600 years compared to the beginning of the 7th millennium. The bulldozing had also opened a large area previously untouched by our earlier excavations, and it appears that there was an “industrial” area in the northwestern part of the village marked by massive amounts of broken stones and ash, although until we can analyze the sediments recovered from the deposits, we are at a loss to explain what kinds of activities may have taken place; the relatively dense amounts of animal bones suggest some facet of faunal processing.