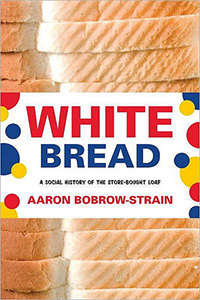 Aaron Bobrow-Strain, associate professor of politics, says classroom interactions helped pave the way for his most recent publication, the critically acclaimed “White Bread: A Social History of the Store-Bought Loaf.”

“White Bread” tells the story of how the sliced supermarket loaf went from being an icon of American progress in the early 20th century to an object of scorn in a society increasingly concerned with eating local and organic.

Bobrow-Strain drew on classroom discussions with Whitman students who took his “Whitman in the Global Food System” course.

“I’m always bringing new sources and ideas from my research into the classroom,” he said. “Students really like engaging with this cutting-edge material, and working through it with them pushes me a lot.”

And thanks to Whitman’s funding for faculty-student research collaborations, three former students were able to assist with the research process: Justine Pope ’07, DeeDee McCormick ’10 and Robin Lewis ’11.

“White Bread” was featured on NPR’s Sunday Edition, and Bobrow-Strain contributed articles to The Believer, The Chronicle of Higher Education, Salon and The Huffington Post, among others.