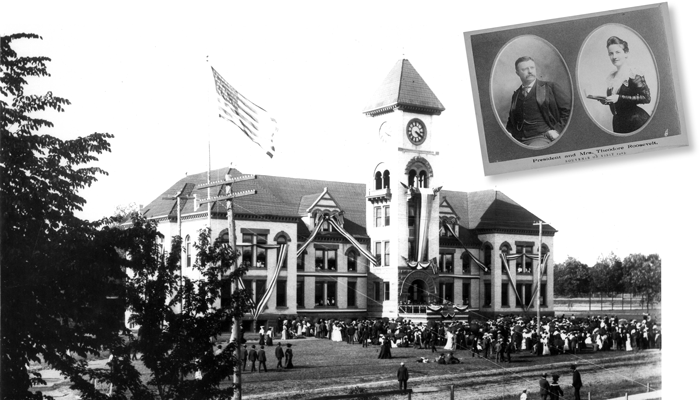 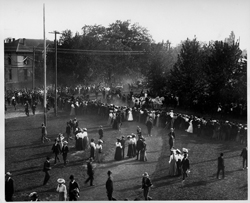 On May 25, 1903, President Theodore Roosevelt addressed a crowd of 6,000 on the Memorial Hall grounds. The visit was “part of a campaign to gain western support for his forthcoming bid for the presidency,” according to the website HistoryLink.com.

Top: The crowd gathers to hear the address.

Inset above: A souvenir photo of Roosevelt and his wife, Edith, commemorated their visit.

Right: The Roosevelts arrive to campus by horse-drawn carriage. The original Prentiss Hall, decorated for the festive occasion, can be seen in the upper left corner.

Prof. Howard Brode, who taught biology courses at Whitman from 1899 until 1936, photographed the historic visit. In addition to his teaching duties, Brode also served as curator of the Whitman Museum. Images and information are courtesy of the Whitman College and Northwest Archives. 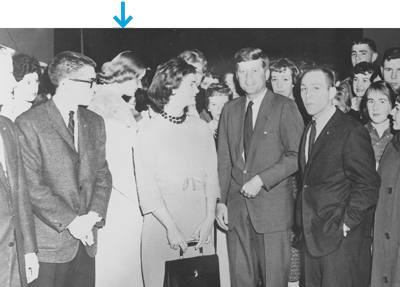 See a familiar face in this photo? That’s Nancy Simon ’63, Garrett professor of dramatic art, to the left of Jackie Kennedy and President John F. Kennedy. Simon said she didn’t know the photo existed until Whitman Magazine asked about her memories of the visit. She writes, “My recollection is that we went to Milton-Freewater to see Kennedy. A lifelong liberal, I was dating a Republican, and my recollection is that the Young Republicans organized the trip!” 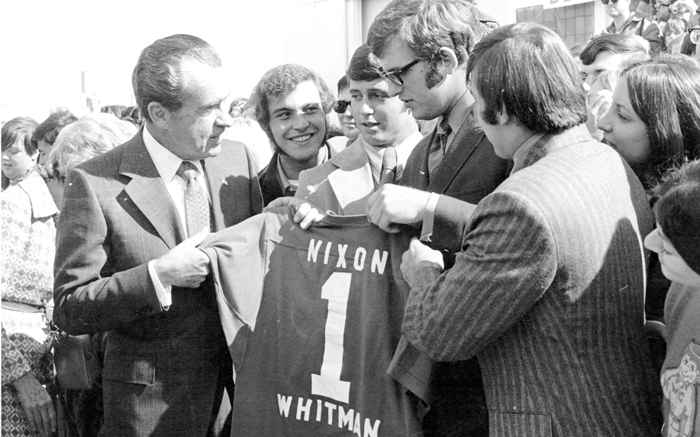 Above, President Richard Nixon receives a Whitman football jersey from team co-captains John Davis ’72, Bob Crabb ’72, Steve Washburn ’73 and Bob Reisig ’72. G. Thomas Edwards, William Kirkman professor of history emeritus, described the circumstances of the exchange in his book “Tradition in a Turbulent Age.” Alex MacLeod ’69, director of communications at Whitman (and later managing editor of The Seattle Times) learned Nixon was coming to the Walla Walla Airport to board a helicopter that would take him to the Hanford Site. MacLeod phoned the White House to ask if he could present Nixon with a football jersey. Aides OK’d the idea, as did members of the football team. When Nixon received the gift, he said, “It’s the closest I ever came to making the team. It’s the greatest compliment I’ve ever received on one of these trips.” He added, “I deeply believe in the small, independent college.” The gesture stirred controversy in the community. Yet, Edwards writes, “From New York to San Francisco, major newspapers carried the photograph of Nixon accepting the jersey. Probably no picture ever published brought more attention to the college.”