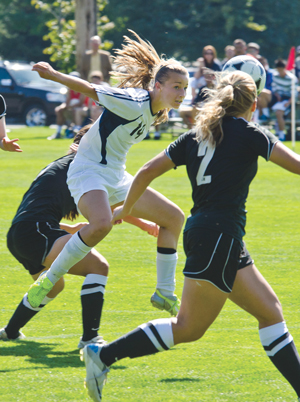 All sports teams at Whitman College have set high standards for athletics this year. Highlights ranged from competing in national tournaments to achieving career milestones.

To kick off the fall season, men’s soccer traveled to California for a series of preseason matches. The first match resulted in a 1-0 win over previously ninth-ranked Redlands University. Michael Bathurst ’13 made key saves to maintain a shutout. Michael Axelson ’14 scored the lone goal.

Women’s golf competed in the O’Brien National Invitational in South Bend, Ind., which featured 10 of the nation’s best 15 teams. Katie Zajicek ’14 led the Missionaries to a ninth-place finish. The women’s national success was followed by regional dominance, as they placed second at the Pacific University Invitational and first at the Whitworth Invitational.

The men’s and women’s tennis teams have been perennial contenders on the national level, and 2012 has been no exception. Representing the women’s team at the ITA National Championships this October were Courtney Lawless ’15 and Alyssa Roberg ’14. The two players ranked 22nd and 26th in the nation respectively, and they ranked 10th as a doubles team. They finished fourth at the championships.

Three members of the men’s team qualified for nationals. Colton Malesovas ’15 competed in the singles tournament. And the duo of Andrew La Cava ’14 and James Rivers ’15, seeded fourth in doubles, became the first Whitman tennis players to play for a national championship in more than three decades. Malesovas lost a competitive play-in match. La Cava and Rivers narrowly lost in the final to finish second. This was the best national finish under Coach Jeff Northam ’88.

The Whitman College volleyball team finished the season on a strong note, winning 6 of its last 7. In their last game of the season, Whitman netters played on an emotional level seldom equaled during the season and dismantled Pacific University 25-18, 25-15, 25-18 to nail down fourth place in the NWC standings with a 9-7 record. In doing so, three players earned All-NWC honors.