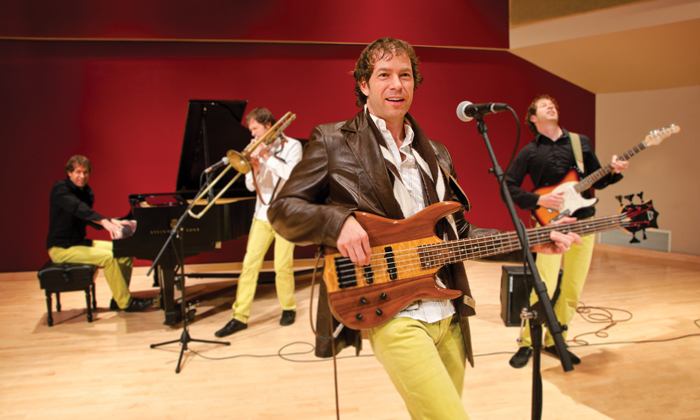 Assistant Professor of Music Doug Scarborough grew up in the “Voodoo Triangle” – the area around Memphis, Nashville and New Orleans – where rock, jazz, country and blues were born.

Whitman Magazine: Sounds like you were born to play the blues.
Doug Scarborough: Highway 61, made famous in the Bob Dylan song “Highway 61 Revisited,” was our town’s Main Street. I was born in Merigold, Miss., population 664. Smack dab in the middle of the Delta.

What’s your instrument of choice?
Trombone. Because there are no buttons to push.

What’s your favorite type of music?
That depends. At the moment, I play in seven different bands. From jazz to rock, to a Dixieland band. That’s what’s wonderful about a town like Walla Walla. First, it’s way bigger than the town I grew up in. It has a good music scene, many places to play. It’s beautiful. The community is very supportive of live music. But my specialty is jazz.

What’s the one jazz album everyone should own?
Man, that’s a tough one. It’s like trying to say what you want to eat every day. Pizza’s great but you don’t want it every day. If you poll the critics, they’ll tell you “Kind Of Blue” by Miles Davis. But jazz is so diverse. It’s impossible to pick just one CD.

Jazz is all about improvisation. How do you teach it?
There are fundamentals like scales, arpeggios and chords. Once you get those down then you’re able to impart your own personality and creativity through the vocabulary. It’s like the English language. There are words, syllables and punctuation. Then there are phrases and figures of speech. Pretty soon you internalize those and you become creative. Jazz is like telling a great story.

Why is it important for Whitman students to study music?
Music trains your brain to be creative. That’s essentially the crux of a liberal arts education – introducing you to the classics but also teaching you to think critically. It’s like being a professional athlete. The football is thrown and a defensive back goes to cover the receiver, say Randy Moss. You have to react to every step Moss takes, every shoulder turn, to figure out when the ball’s coming. In music, you have to be so quick that it trains your brain. Music acutely addresses your critical thinking skills.

You have to practice to get better, so music also teaches discipline.
You have to sit on your butt and practice. After practicing and then mastering a piece you realize that if you apply yourself like this to any profession you will become better. It’s an eye-opening experience. Some people think they’ll never be anything other than what they are. That’s not true. Your drive makes or breaks you. So whatever field students go into, if they practice and apply themselves, it’s the golden ticket.