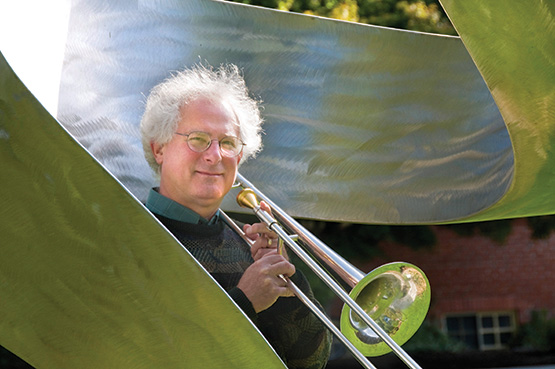 The Alumni Association honored David Glenn with the 2011 Faculty Award for Service. In cooperation with the alumni office, he plans a Jazz Ensemble Weekend in April.

After 22 years of teaching at Whitman, David Glenn, professor of music, has been a witness to many changes in the classroom and recording studio, including the introduction of PowerPoint and virtual instruments. But one thing has remained the same — to him, the students have always been a "constant inspiration."

Since his arrival on campus, Glenn has conducted the jazz ensemble and built up the program from a small eight-person ensemble that needed community members to fill out the group, to one that now hosts two full student ensembles.

"Over the years David built one of the best jazz programs at any liberal arts school in the country," said Susan Pickett, Catharine Gould Chism chair of music. "He was a tireless recruiter of students into his program."

Brian Barton '11 has played in the jazz ensemble since his first year at Whitman and also has taken a number of classes from Glenn. "It's been great to have a professor who is our biggest fan and looks for every opportunity to feature us and support us in our own musical growth. I have been so grateful for the opportunities that Dave has provided me with to grow musically. He has a tremendous amount of musical knowledge, is an excellent educator and performer, and he's played with some of the greatest jazz musicians of all time."

Glenn's many accomplishments outside the classroom include the recording of "National Pastime," a jazz CD of his original compositions and arrangements, released in 2009. It scored enough airplay to place it in the top-50 JazzWeek chart during the summer of its release. His latest chamber music piece, "Sculpture Garden for Piano Quintet" was commissioned by the Walla Walla Chamber Music Festival in 2009.

A Garrett Fellow and 2011 recipient of the Faculty Award for Service, Glenn said he has always enjoyed Whitman for the "beautiful environment, great colleagues in the music department and the high quality of students."

His plans for next year include "teaching myself to be a better composer" and editing previous works while staying local, since his wife, Laura Curtis, music assistant, is still working at the college.

Glenn says about his students, "Hopefully they learned just how fun it is to make music and to learn something."