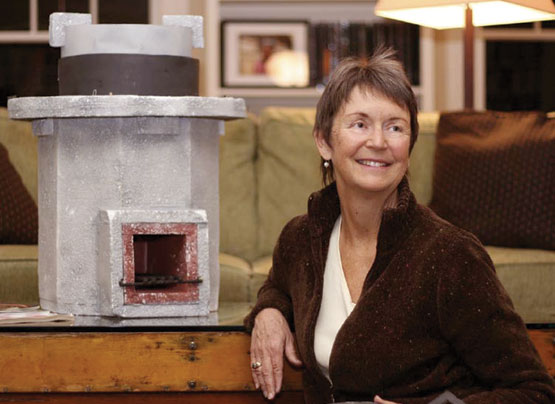 Nancy Sanford Hughes ’64 is pictured with the fuel-efficient and safe Ecocina stove designed for the nonprofit StoveTeam International. The group works with other service groups to help local populations establish Ecocina factories in their own countries.

For most of us, the kitchen stove is something we rarely have to consider, let alone worry about. Outside of the occasional burned finger or overcooked pot roast, modern stoves pose relatively little risk to our health and safety. Unfortunately, this isn’t the case for much of the world, and according to the World Health Organization, smoke from indoor, wood-fired cooking stoves is one of the leading causes of death for children under the age of 5.

“I was just horrified by what I saw. There would be more than 1,000 people waiting in line for hernia operations from lifting and carrying heavy bundles of firewood on their heads, and that’s in addition to all of the burns and inhalation-related illnesses we saw.”
— Nancy Sanford
Hughes ’64

For Nancy Sanford Hughes ’64 — the Alumni Association’s 2011 Alumna of Merit — this is a statistic that has to improve. But she’s not just hoping things get better, she’s making sure they do.

In 2003, she decided to pursue an interest she’d harbored for years and embarked on a medical mission trip to Guatemala with a team of volunteers from her hometown of Eugene, Oregon. On that trip — and on the many others that would follow — she volunteered in the kitchens of various medical centers, where she was often permitted to watch some of the procedures done in the clinics.

"I was just horrified by what I saw," Hughes said. "There would be more than 1,000 people waiting in line for hernia operations from lifting and carrying heavy bundles of firewood on their heads, and that’s in addition to all of the burns and inhalation-related illnesses we saw."

During a 2004 trip to Solola, Guatemala, she met an 18-year-old girl who had fallen onto a cooking fire as a toddler and, as a result of severe burns, had spent most of her life without the use of her hands. In that moment, it became clear to Hughes that in addition to treating people for illness and injuries associated with cooking stoves, something had to be done to help prevent them from happening in the first place.

When she returned to Eugene, Hughes channeled her concern into action — searching for funding and solutions to provide safer, fuel-efficient stoves to the people in Central America who desperately needed them. Her concentrated efforts materialized in the form of grants from her local Southtowne Rotary club, Carlos Santana’s Milagro Foundation and the Synchronicity Foundation. Before long, she had joined forces with other people who were equally passionate about the cause, including Larry Winiarski, an inventor and advocate of clean and efficient household technologies who helped design a special cooking stove that addresses this serious health issue.

Inexpensive to produce with materials found in the many towns and villages where they are needed, the portable and fuel-efficient Ecocina stove is insulated, making its casing cool to the touch when in use. The stove is designed to burn less wood more efficiently, while reducing the particulate matter and carbon emissions produced by a traditional stove by more than 70 percent.

By 2006, Hughes’ mission to improve the lives and ensure the safety of countless people had blossomed into StoveTeam International, a 501(c)3 organization staffed by a team of dedicated volunteers. In addition to raising funds and assisting with grants, the organization pairs service groups in the United States with those in developing countries that then provide grants for locals to establish their own Ecocina factories. Hughes said the operation creates a "win-win," as the factories create jobs for local workers while producing and selling the stoves to people in their communities.

"I never thought it would turn into something as large as it has, and we currently have more demand than we can meet," Hughes said. "I think we just came across the perfect storm at the perfect time."

Hughes’ Whitman experience helped prepare her for international philanthropic work by teaching her to look at the world from diverse perspectives, she said. "My liberal arts education gave me the tools to find the opportunities in challenges and use them to the best advantage. I was a literature major, but I took classes in geology that made me think about the Earth, and my sociology courses helped me understand more about different people, cultures and societies."

Her well-rounded approach and dedicated leadership have helped StoveTeam earn a number of awards and recognition for its innovative solution and diligent work. Early this year, the organization earned the Special Achievement Award in Developing Local Markets from the Environmental Protection Agency’s Partnership for Clean Indoor Air.

Hughes said she was extremely honored — and surprised — to learn she had been awarded the 2011 Alumnus of Merit award. "I’m not interested in being personally recognized, but any recognition for our project is very exciting to me," she said.

"Anybody can effect change, but you have to have a purpose, and you have to have passion. I guess I’m lucky to have both," Hughes said. "I feel very blessed for having the ability to make a big change in the world. Plus, it’s totally fun. I wouldn’t do it if I didn’t truly enjoy it."