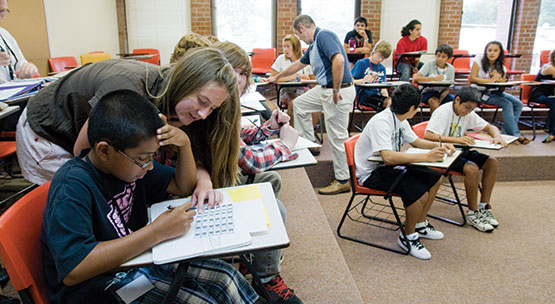 Through the years, donors have honored Whitman College with gifts in a variety of shapes and sizes. In the late 1800s, Dr. Dorsey Syng Baker donated the land on which Whitman’s first academic building, College Hall, was constructed. Now more than a century later, Baker’s descendants are supporting the college in another creative way — with a special-release wine from their award-winning family winery, L’Ecole No 41, in Lowden, Washington.

L’Ecole No 41 was established in 1983 by Baker’s great-grandson and namesake, Baker Ferguson ’39, and his wife, Jean. It is now owned and operated by the Fergusons’ daughter and son-in-law, Megan ’79 and Martin Clubb. To honor both Whitman’s legacy of providing a comprehensive education and the six generations of Baker heirs to graduate from the college, including their son, Riley Baker Clubb ’09, L’Ecole has developed a special release: a 2008 Walla Walla Valley red wine called "L’Érudite," a French word that aptly means "the scholar." 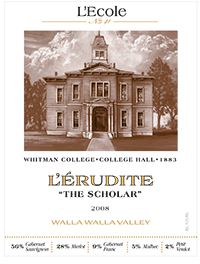 The "L’Érudite" label features a rendering of College Hall, which was built on land donated to Whitman by Dr. Dorsey Syng Baker.

In the family tradition of supporting Whitman and serving youth in the local community, all profits from the sale of "L’Érudite" will be donated to the Whitman Institute for Scholastic Enrichment (WISE) program. Now in its fifth year, WISE is a free program that provides a college-like experience for primarily low-income and/or first-generation college Walla Walla area middle school students. The program generates excitement about college and helps students see it as a realistic goal. Participants stay in residence halls on campus for three days to attend classes taught by Whitman professors and take part in college-prep workshops. Parents of these students receive guidance on financial aid, high school academic choices and other ways to prepare their children for college.

The Clubbs believe the WISE program is an excellent outreach to the Walla Walla community. According to Megan, "Our hope is to open doors to opportunities that local students and their parents might have thought were not obtainable."

The 2008 "L’Érudite" is a reserve Bordeaux blend of five grape varietals from two of the Walla Walla Valley’s most acclaimed vineyards. Whitman affiliates are receiving priority early ordering beginning now, and the wine will subsequently be released to the public in May 2011. Orders may be placed online or by calling the winery at (509) 525-0940. With 300 cases available, the Clubbs hope "L’Érudite" will generate more than $100,000 in funding for the WISE program.