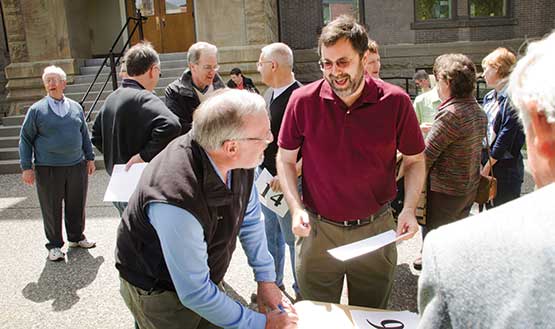 Debate coach Jim Hanson, center, shares a laugh with his predecessor Bob Withycombe, at left, as they and others sign in for the debate reunion group photo (below story).

There was no debate about it.

"It was literally one of the best experiences of my life," said Jim Hanson, professor of forensics and debate coach, about the recent speech and debate reunion.

Today's team has so much in common with the debaters of 25 years ago — a love of intellectual argument and logical gamesmanship, strong support and camaraderie among one another, and a true devotion to research.
Jan Berman '86

Held for the first time in 14 years, the reunion was orchestrated as part of the 2011 Whitman Spring Reunion Weekend, which took place on campus April 28 through May 1. The event included a number of organized activities and social events, gathering more than 70 debate alumni, current students, and family and friends for three days of reminiscence, friendship and a lot of laughter.

"I loved seeing all the former students I had coached and alumni that I either hadn't seen for a long time or that I had only heard about. It was like attending a big family reunion filled with family members that I actually like," Hanson said.

Hanson co-hosted the weekend event with the Whitman alumni office and former debate coaches, Remy Wilcox, lecturer in speech and coach from 1969 to 1980, and Bob Withycombe, professor of rhetoric and film studies and coach from 1980 to 1993, who ended his time in the classroom this year after three decades at Whitman. The gathering offered a rare opportunity for alumni to reconnect and share memories with some of the people who helped shape their Whitman experiences.

The reunion kicked off with a Thursday evening reception at the home of Withycombe and his wife, Nancy. The following three days of events included Hanson's presentation on the history of Whitman debate, a reunion dinner and alumni debates, and a team exhibition showcasing the talents of the current debate team for visiting alumni.

"I really enjoyed visiting with friends that I hadn't seen in more than 25 years," said Jan Berman '86. "And it was great to meet the current debate team and hear them debate. Today's team has so much in common with the debaters of 25 years ago — a love of intellectual argument and logical gamesmanship, strong support and camaraderie among one another, and a true devotion to research."

Berman, who works in the energy industry, said that Withycombe's coaching and the intellectual challenges provided by debate were some of the most impactful learning experiences of her life.

"Bob provided us with the infrastructure and support we needed, and he then encouraged us to reach our full potential," Berman said. "The thinking skills I learned on the field of debate have been the most useful in my career in business management. I would stack up my Whitman debate training as equivalent to my MBA in preparing me for a future in the business world." 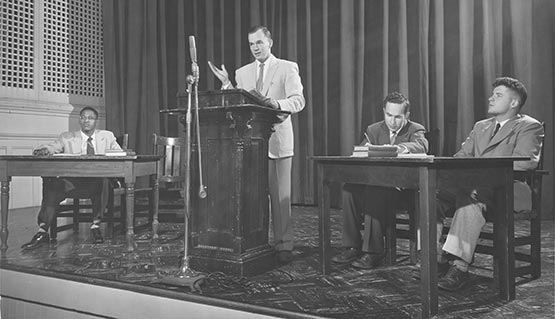 For Brent Northup '68, the reunion was a time to reconnect with old friends and pay respect to the college that helped set his personal and professional course. Now a debate coach, professor and chair of the Department of Communications Studies at Carroll College in Helena, Mont., he has great appreciation for the quality education and loyal support he received from Whitman faculty members such as Dean McSloy, professor of speech emeritus and debate coach from 1954 to 1969.

I never imagined that we could share so many stories, laugh so hard and stay up so late. It all reminded me of why I loved coaching … and why students devoted so much energy to participating.
Bob Withycombe
former debate coach

"Whitman transformed my life in so many ways, and I very much wanted to come back and say thank you," Northup said. "And since I am a forensics coach, it seems only fitting that I should come and support Jim Hanson and his students as they carry on the proud tradition of Whitman forensics."

Demonstrating the signature sense of humor shared by many Whitman debaters, he added, "And when I'm not closely watched, I hope to steal secrets from Jim's squad room and take them back to my team to use against Whitman next fall."

Former Whitman debater Jason Smith '97 had planned to take part in the debate reunion but was unable to attend due to an overseas deployment with the U.S. Marine Corps Reserves. Nonetheless, the important occasion brought to mind the many benefits his debating experience has had on his life and career.

"Debate did two big things for me. First, it gave me the confidence needed to speak clearly, forcefully and still incorporate a little bit of humor in some pretty high-pressure situations," said Smith. "But perhaps more importantly, debate gave me the ability to critically analyze complex situations and quickly develop responses. I have used all of these skills in the Marine Corps and in my current civilian job."

Reflecting on the meaningful relationships he made while debating for Whitman, he said, "there is no doubt that hanging out with my debate peers made my Whitman experience very enjoyable. And my coach, Jim Hanson, is a great man who had a big impact on my time at Whitman. Plus the dude is very funny!"

Following the reunion weekend, Hanson took the opportunity to use his trademark sense of humor to both honor and roast his retiring colleague, Withycombe, at the annual faculty awards ceremony. In his speech he joked about Withycombe being a "great but shady man," recounting some of the "crazy stories from his time as a professor and debate coach."

But after some friendly ribbing, Hanson respectfully recognized the many accomplishments of Withycombe's long career — including being named 2009 Washington Professor of the Year, serving as Whitman associate dean of faculty, and coaching a number of national championship competitors and teams.

Reflecting on his involvement in the last debate reunion of his Whitman career, Withycombe said that he "never imagined that we could share so many stories, laugh so hard and stay up so late. It all reminded me of why I loved coaching … and why students devoted so much energy to participating. 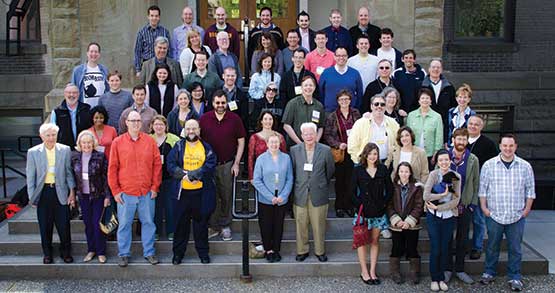