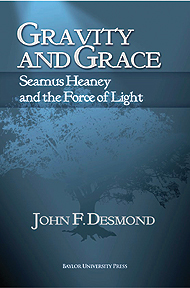 Although Desmond started studying Heaney’s poetry in the 1970s, it was in the ’80s, when he began teaching Modern Irish Literature at Whitman that he became fully engaged in the poet’s work. In fact, says Desmond, “Gravity and Grace” is dedicated to “all those Whitman students who studied Heaney with me in the Irish course.”

Desmond’s previous books include “Risen Sons: Flannery O’Connor’s Vision of History,” “At the Crossroads: Ethical and Religious Themes in the Writings of Walker Percy,” and “Walker Percy’s Search for Community.” In “Gravity and Grace,” Desmond finds new insights into what one colleague referred to as the “well-ploughed terrain of Heaney’s poetry,” by studying it through the intellectual lenses of French philosopher Simone Weil and well-known poet Czeslaw Milosz.

Weil, said Desmond, was a powerful influence on Milosz’ thought and writing; Milosz, in turn, exercised considerable influence on Heaney’s thought and poetry. Using these connections, Desmond shows how Weil’s paradoxical thought about Christianity and transcendence illuminates Heaney’s complex relationship with Christianity in his poems.

In so doing, Desmond brings to light new Christian and transcendental elements in Heaney’s poetry, and “Gravity and Grace” has received praise from literary scholars for uncovering a new depth to the poet’s work.

Edward Dupuy, dean of graduate studies at Savannah College of Art and Design, said: “Desmond’s readings of Heaney’s poetic oeuvre are marked with awe and humility, and they are themselves the force of light brought to awareness in love.”

Not surprisingly, Desmond’s interest in and aptitude for Heaney’s work reaches beyond the academic. “My interest in Heaney’s work has an intuitive, personal side,” notes Desmond, who grew up in an Irish-American community in which most of the adults, including his parents, were born in Ireland. “I grew up listening to and absorbing their talk — the diction and the unique rhythms and cadences of their speech.”

So when Desmond first read Heaney, he felt an immediate identification with the language and the rhythms of his poems. “It was the same when we met,” says Desmond. “When we were first introduced, we immediately began bantering as if we had just seen each other last week and were continuing a conversation.” These conversations between the two resulted in Heaney presenting the Walt Whitman lecture at Whitman in 1999.

While Desmond’s engagement in the poetry of Heaney is probably greater than most who will read “Gravity and Grace,” he hopes his readers will gain “a greater understanding of and appreciation for the work of this great modern poet and the complexities of modern Irish culture, particularly its literature.” And, of course, like all good teachers and writers, he hopes “this small book” will enrich its readers’ lives.