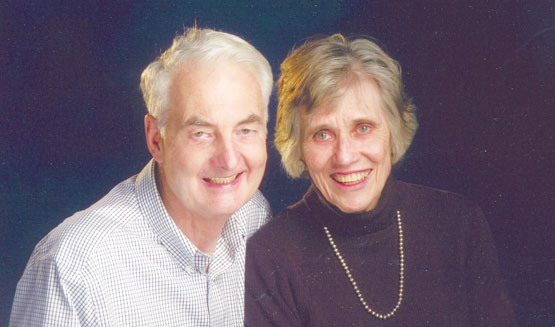 Living a life of intense intellectual and professional activity, service to community and countless runs down ski slopes, not much has changed for Paul Burton ’51, a former Whitman varsity skier and his wife, Nancy McKay Burton ’53, who were interviewed recently – after their day of downhill skiing at Stevens Pass in Washington.

“We ski 40 to 50 days a year,” said Paul, former president and current board chairman and consultant for the Seattle-based Ratelco Properties Corporation. And he remains a superb top-speed skier who’s still “one of the best skiers on the hill,” his wife said.

“We do outside sports all year long,” said Nancy, a former projects manager and senior facilities planner for the Seattle School District. There’s also kayaking, canoeing and swimming, and then there are business pursuits – and, of course, their continued service to their alma mater.

Their zest for and service to Whitman College earned the Burtons the Alumni Association’s 2010 Gordon Scribner Award for Distinguished Service, given to persons who have made a major contribution of volunteer time and effort to the college over an extended period of time and who possess the ability to inspire. The Burtons attribute much of their personal and professional success to their Whitman experience, said Paul, explaining their continued devotion to the college.

Paul serves on the college’s Planned Giving Committee and is a former board member of the Alumni Association and former president of the Seattle Whitman Alumni Club. Nancy, the 2001 Mortar Board Alumni/Tolo Foundation’s alumna of the year, has served as a member and chair of the Whitman Board of Overseers and co-chair of the Whitman College Alumni Fund.

Paul said the quality of his Whitman education became readily apparent when he found how easily he could hold his own among “Ivy League” students during graduate school at Stanford University.

He’s glad he went to Whitman for two main reasons: First, because he met his beloved Nancy when he gave her and other skiers a ride to the slopes one day; and secondly, because it gave him, a somewhat shy person when he came to Whitman, a place to “expand my horizons. There were so many opportunities to get involved, so many activities.” And he learned how to “analyze, critically compare and contrast, and argue both sides of an issue.” Paul, who came to Whitman with future plans to become a doctor, tired of labs and switched to business and economics, then went on to graduate from college and Coast Guard officer training. He said his Whitman education has helped him with all of it, including his volunteer efforts that included serving on the Shoreline School Board, the Board of Trustees of Shoreline Community College and as a board member and treasurer of the YMCA of Greater Seattle.

Nancy, who came to Whitman with the goal of becoming a social worker, learned her leadership skills at Whitman. After receiving a bachelor’s degree in social science, she accepted a position in Whitman’s Office of Student Affairs and then taught in Alaska, where Paul was stationed with the Coast Guard. She raised four children and volunteered, as well as worked 19 years for the Seattle School District in planning and research during a tense period when many schools had to be closed for budget reasons. She helped a weary school board facing an angry public navigate through a challenging time.

Two of their four children are Whitman graduates – Jean Burton Over ’82 and Bob Burton ’84 – and they have nine grandchildren, including Stephen Over ’11. The Burtons said they are honored to receive the Gordon Scribner Award. Nancy said she’s “not sure we’ve done much more than other people. Many people have done as much, they just haven’t been recognized yet.”

But she does view herself a “change-maker,” someone who looks for changes that need to be made.

Or another hill to conquer. Let it snow.

Hillis honored to receive award named for Scribner, a friend and mentor 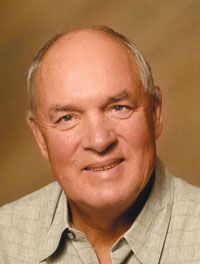 Jerry Hillis ’61, who was raised in the “Seattle projects” until sixth grade and then on a subsistence-level farm near Edmonds, Wash., eventually worked his way to becoming a nationally recognized authority on land-use and environmental law. Now he is the recipient of the Gordon Scribner Award for Distinguished Service to his alma mater, Whitman College.

The attorney is extremely grateful for the honor. But it goes even deeper than that.

The award, given to those who volunteer for an extended period of time and have the ability to inspire, is named after Gordon Scribner ’42, who prior to being a Whitman dean of students and director of alumni, just happened to be Hillis’ high school guidance counselor at Edmonds High School. Who just happened to be the person who told Hillis about Whitman and encouraged him to go to Whitman – a place and experience he never could have imagined.

“I don’t think anyone in my family understood what Whitman was, what liberal arts was … neither did I,” he said.

Hillis said Scribner encouraged and guided him through the process of getting into Whitman and later became a friend.

From eighth grade on, Hillis wanted to be an attorney. He’s not sure why – it may have had something to do with television’s Perry Mason or learning that many U.S. presidents had been attorneys.

And his mom was intent that he go to college and into a different environment than the challenging one he grew up in, he recalled. In addition to subsistence farming, his stepfather was an auto mechanic, but was out of work often because of health issues. “In an environment where the family is poor, you have all kinds of issues around you … lots of anger and disappointment,” Hillis said.

He planned to use his star football skills to get a scholarship to pay for college. But when some college officials made it clear they would “take care of” his studies and grades so he could focus on football full time, he knew he didn’t want that type of college experience and then “end up back home pumping gas,” which, according to an article he had read, often happened to college football players.

Not knowing what to do, he went to Scribner for help. And that’s when Hillis, who had good grades, found out that he could receive help from Whitman that was based on financial need, not football skills.

After arriving at Whitman, he realized “a lot of people around me were much better prepared academically, but I was very fortunate.” His English Professor Harold Sims, as Whitman professors have historically done, took the young student under his wing, and helped him learn how to study and write well, Hillis said. “I developed confidence that I could do it,” he said.

He made it financially by working at the SUB (Student Union Building) and at Lyman Hall serving food, washing dishes and mopping floors. During summers, he worked construction jobs in Seattle.

Hillis, a political science major named an All-American football player three years in a row, also was a Phi Delta Theta and president of the political union. He became close to Sims and Professor Robert Fluno, who taught political science. “I idolized Fluno,” Hillis said. “He was the quintessential professor.

“When you’re around intelligent people dedicated to an academic life, it can’t help but rub off on you.”

After graduation, Hillis accepted the college’s alumni director position, and later the job of assistant football coach, with a goal to work and save money for law school. His wife, Reinette Smith (now deceased), worked to help support him as he pursued his dream at the University of Washington School of Law. With his Whitman education, he found himself “very well prepared” and graduated in the top 10 percent of the class. Eventually he would go on to start his own firm in Seattle, now called Hillis Clark Martin & Peterson, P.S.

Hillis, who is “partially” retired now, said that years ago he pioneered the idea of periodic, paid sabbaticals for attorneys and staff. Today his is still the only law firm in Seattle that does this. He introduced the idea after realizing that attorneys in high-pressure practices needed more family time.

Over the years, he has received accolades for his legal work: Nominated by peers, he has been recognized as a “super attorney” every year since 2002 in the Washington publication of “Law & Politics,” and a Seattle Times article referred to him as “… the best authority around on land use and compliance with the environmental laws.”

And through the years he has put in countless hours for Whitman: In addition to two years as alumni director, he spent 20 years on the Board of Trustees and was a past president. He served on the Alumni Association board and as an overseer, and he is now on the W Club board. In 1981, he was the Alumnus of Merit, and in 2003 he became one of the first five alumni inducted into the Athletics Hall of Fame.

Hillis is married to Diana H. Gale, and two of his three children are Whitman graduates: Cynthia Hillis Bostwick ’82 and David J. Hillis ’90, as well as a granddaughter, Kendra Bostwick ’09.

Hillis said recently he felt very fortunate to be able to serve Whitman. “It was not only rewarding for me, it was an opportunity for me to get to know the institution and how it operated.

“I’m proud of the fact that Whitman has gotten better and better in every area. We’ve been blessed with really good presidents.” But the key has been Whitman’s strong faculty, he said.