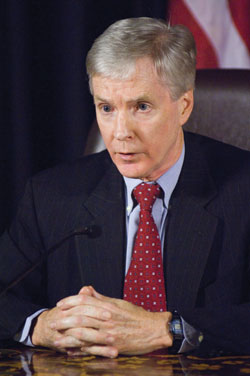 Ryan Crocker ’71, who retired earlier this year from his 38-year Foreign Service career, has received the Presidential Medal of Freedom, the highest civilian honor a U.S. president can bestow.

Crocker’s “career has taken him to every corner of the Middle East,” Bush said. “His understanding of the region is unmatched, his exploits are legendary … He has repeatedly taken on the most challenging assignments,” Bush said, calling Crocker “one of the finest Foreign Service officers in American history.”

The medal citation said, “For nearly four decades Ryan Crocker has advanced our nation’s interests and ideals around the world, embodying the highest principles of the U.S. Foreign Service.”

Crocker’s career included five ambassadorships, the latest in Iraq. He and his wife, Christine, plan to live in Spokane, Wash. Crocker will deliver Whitman’s Commencement address on May 24, 2009.