If Ash O’Donnell ’43 and Virginia Graham ’43 had written their own “I Have a Dream” speech when they married 66 years ago it would read like this: travel the world to learn about cultures; use our talents to benefit business and the public; teach our children to be global citizens; and help educate Whitman students about the critical importance of thinking and acting beyond the boundaries of a map or a culture. 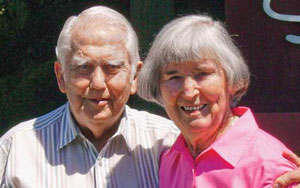 The physics major (“Ash”) and the Phi Beta Kappa (“Gini”) followed their dreams. The global emphasis they envisioned for Whitman is possible today in part because of efforts they began in the 1980s that culminated in 2002 with the establishment of the O’Donnell Visiting Professorship in Global Studies. It brings to campus experts in international fields from diplomacy to engineering and the arts, and is now a key component of the Global Studies Initiative.

The O’Donnells began laying the groundwork for the global studies professorship around the time their youngest child, Jennifer (O’Donnell Conner) ’83, graduated from Whitman. However, the source of the couple’s love of the college and desire to infuse its students with a global awareness was born more than five decades earlier when Gini, from Seattle, and Ash, from Helena, Mont., were awarded four-year scholarships. “From that moment on, we held Whitman in high regard,” said Ash.

After graduation, the O’Donnells followed an international route, each stop along the way enriching their belief in the value of an interdisciplinary, global education. And each stop worthy of a chapter in a book Ash hopes he will someday write. Neither a speech nor a magazine story could do it justice.

Early chapters would find Ash — within one week of his graduation from Whitman — working on the Manhattan Project, first at the radiation lab at the University of California, Berkeley, and later with Gini in Oak Ridge, Tenn., at Y-12, the production site for the U-235 used in the Hiroshima bomb. In 1947 the U.S. Atomic Energy Commission (AEC) replaced the Manhattan Project, and Gini, Ash and first-born daughter Sherry (O’Donnell Burns) ’68 returned to the West, where Ash worked for the AEC at the Hanford Nuclear Reservation in Washington.

In 1951, the family of four (with the addition of daughter Joan) moved to the San Francisco Bay Area, where the AEC set up an office to oversee operations at the Livermore Laboratory. As technical operations manager of that office, Ash witnessed nuclear weapons tests in Nevada and Eniwetok in the Marshall Islands.

Middle chapters in the 1950s would chronicle the birth of their third daughter, Lynn, and Ash’s shift to the private sector and peaceful uses for atomic energy as he joined the Stanford Research Institute (SRI) and organized the Nuclear Economics group. Ash and Gini attended the first U.N. International Conference on Peaceful Uses of Atomic Energy convened in Geneva, Switzerland, in 1955.

The couple worked as a team throughout their assignments and spent the three weeks after the Geneva conference visiting European countries for SRI and making lifetime friends. In 1956 they participated in the San Francisco World Affairs Council Asilomar Conference on peaceful uses of nuclear energy. In 1957, Ash traveled around the world — 17 countries in three months — to study nuclear energy programs and to present papers at the first Japan-U.S. Conference on Peaceful Nuclear Energy.

The opportunity to work in Vienna, Austria, with the International Atomic Energy Agency (IAEA) “came out of the clear blue sky” in 1961, fulfilling the O’Donnells’ dream to move their children, including baby Jennifer, overseas so they “could start understanding the world around them.” Princeton Professor of Physics Henry D. Smyth, appointed by President John F. Kennedy as U.S. ambassador to the IAEA, hired Ash as his senior scientific and technical adviser to the U.S. mission to the agency.

“It was part of our real plunge into a world we thought we knew,” Ash said. “Yet every day, we learned something we didn’t know.” As the story unfolded during the family’s three-plus years in Vienna, he and Gini represented their country as members of the U.S. Diplomatic Corps, and their three oldest daughters attended the American International School with children from 35 nationalities. “It made real international citizens of them,” said Ash.

In 1964, after serving more than 10 years with the AEC and Department of State, Ash accepted an offer from Bechtel Corporation, a private engineering and construction firm, in San Francisco. He retired in 1987, after opening new fields of business, serving as vice president of several divisions and, later, being elected a director of The Bechtel Group of companies.

In the final chapter of their career, the couple traveled the world advancing the interests of Bechtel and participating in international organizations. Challenges included selection of the best-prepared engineers, constructors and staff to perform the work in new environments, bringing into focus for the couple the importance of global education.

The O’Donnells, convinced that Whitman needed to “go global” — to develop professionals capable of understanding different cultures and the rapid changes in the world — had begun efforts to bring Ambassador Philip Habib, special presidential envoy to the Middle East, to campus to deliver the 1983 Commencement address. It was 1986 before the ambassador’s schedule permitted the visit. “We knew he was involved in some discussions” during the day of his talk, Ash said. That night, at Cordiner Hall, Habib made the first public announcement that the United States had bombed Libya in retaliation for terrorist attacks. Habib had been in negotiations “trying to get Libyan Col. Muammar Gaddafi to back down,” Ash said.

“That’s what we were looking for — to bring real-life experience” to students. “We couldn’t have written a script to follow that would have accomplished our goal any better.”

He sees the Global Studies Initiative as a natural extension of the work he and Gini began decades ago. “We are delighted with the broad support given this concept by faculty, administration and trustees,” said Ash, a former chair of Whitman’s Board of Trustees.

“Whitman has learned to move with the forces of humanity and the world,” Ash said.

“The bottom line: Change is not optional. It is mandatory if each generation expects to realize the inevitable advancement necessary to meet future inevitable challenges.”