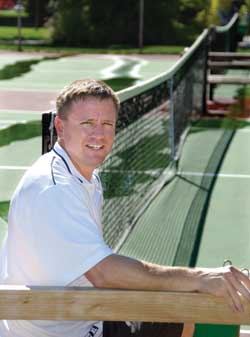 The history of Whitman athletics glitters with memories of coaching legends, starting with R.V. Borleske, who won a total of 17 Northwest Conference titles in football, baseball and basketball in the decades prior to World War II, and track and field coach Bill Martin, who beginning in 1937 won the first of seven straight NWC championships and added three more in the 1950s.

Against the backdrop of those lofty accomplishments, men’s tennis coach Jeff Northam ’88 has spent the past decade quietly laying the foundation for an impressive legacy all his own.

With the team winning its second consecutive NWC title this spring, Northam pocketed “Coach of the Year” honors for the second time in as many years. That gives Northam four titles — and four coaching awards — since the spring of 2000.

It’s not what his competitors want to hear, but from all indications, Northam and his program are just now hitting full stride. Whitman teams have thoroughly dominated NWC opponents over the past four years, winning 68 of 71 dual-match decisions. Most of his 2008-09 roster returns next fall.

Northam, who shared in three NWC titles as a Whitman tennis player, served as part-time coach at his alma mater in the early 1990s and then returned to campus on a full-time basis in 1997. Late this season, his career victory total jumped past 200.

In recent years, with his roster size dwarfing the NWC average, Northam has kept his players happy and their tennis skills sharp by scheduling two matches on the same day, many times in different cities. His talent pool, even divided by two, has kept on winning. In March, his two “teams” won seven NWC road matches in seven days, outscoring the opposition by a combined score of 61-2.

There was no stopping Whitman this spring as it pursued the second of its back-to-back titles. Despite losing its top two players from a year ago and having its third-best player miss half this season because of injury, Whitman rolled to a 24-5 record, the best won-loss mark in Northam’s 15 seasons.

In addition to their spring exploits, Northam’s players have dominated the Intercollegiate Tennis Association’s recent Pacific Northwest fall tournaments. Whitman players have won the singles and doubles titles in each of the past three years, advancing to the national small-college championships and earning ITA All-American honors.

In one of the ITA regional tournaments, Whitman ran the table in the first two rounds of singles, winning all 24 of its matches, before advancing 12 players into the round of 16 and filling seven of eight quarterfinal and all four semifinal slots.

There is nothing accidental or coincidental about such widespread success. It sprouts from soil that Northam has cultivated with great care.

Whitman Athletic Director Dean Snider said the combination of Northam’s tremendous tennis skills and his ability to recruit outstanding students and tennis players make him someone “who could be Coach of the Year every season.”

Snider also lauds Northam as a “wonderful person with a generous heart and tremendous depth of character. He is an excellent role model for our students.” 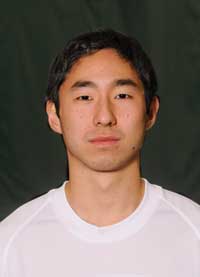 Justin Hayashi ’09, a captain on this year’s team, also speaks in glowing terms about Northam.

“Jeff never hesitates to go the extra mile for his players, regardless of how high or low they might be on the team ladder,” Hayashi said. Northam offers everyone free private lessons on any day of the week, strings rackets for free if the team maintains a high grade-point average, and actively changes the practice routine to keep things interesting, Hayashi said.

Hayashi, who was named this season to ESPN The Magazine’s Academic All-District At-Large First Team, said Northam also is a great life coach.

“Jeff understands that Whitman students are scholars with diverse interests,” Hayashi said. “Due to Jeff’s understanding, I’ve been able to stay active throughout my collegiate years and achieve a successful academic track record. Jeff also understands that life has its trials and tribulations, and he actively ensures that all of his players get through those tough times. He checks on his players by taking individuals out to dinner or calling them just to see how things are going.”

Whitman’s success on the courts is due in part to Northam’s ongoing efforts to create a “team in the truest sense of the word,” Hayashi said. “He organizes team nights for board games or movies, just to keep the team bonded and morale high.”

Finally, Hayashi said, “I wouldn’t be the same person I am today without Jeff’s guidance and leadership. Through Jeff, I learned to be both a team player and a leader, and I learned the true value of what it means to be a student athlete.”