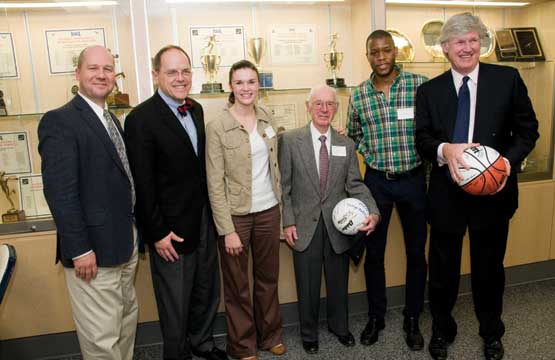 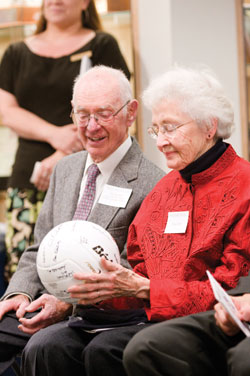 George and Nancy Ball take a closer look at the signed volleyball commemorating the naming of the George Ball Court.

While the facility took center stage at the rededication of Sherwood Athletic Center in November, it was George Ball, Weyerhaeuser professor emeritus of biblical literature, who received heartfelt accolades for his devotion to Whitman athletics and athletes. The main gymnasium has been named in his honor, and the upper-level north and south walls now bear the name “George Ball Court.”

The renovation of Sherwood Center “is part of a broader continuum, from my perspective, that Whitman fundamentally represents a great academic institution that gives people the opportunity to lead,” said John Stanton ’77, trustee and Sherwood donor, in his remarks at the ceremony.

“I can think of no more appropriate representative of that than George Ball, who always committed himself and all of us to academic excellence, but also was constantly involved in the community and was, in addition to being one of the most avid tennis players, also one of the most avid sports fans in Whitman’s history,” Stanton said.

Web Extra: See a video excerpt from the Sherwood Rededication.