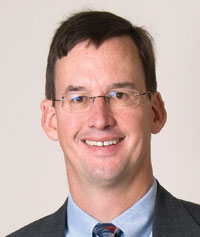 Individuals most deserving of recognition for service to others also seem to be the most humbled when they receive attention for it.

Such is the case with Peter Harvey ’84, Whitman treasurer and chief financial officer, who was honored at the Walla Walla Valley Chamber of Commerce banquet in November with Whitman’s Pete and Hedda Reid Service to Walla Walla Award, formerly called the Town-Gown Award.

“For years Peter Harvey has quietly lent his talents and leadership to numerous community groups, wanting nothing in return but success for the organizations,” reads the certificate presented to Harvey. “Whether using his financial and business acumen to manage from the board room or sharing his passion for sports on youth athletic fields, Peter serves this community.”

The name of the honoree was a closely guarded secret on campus for fear Harvey would resist any recognition for his community work.

“I truly was humbled and very honored,” Harvey said after the presentation. “What makes the award so special is that its new namesakes are so worthy. I’m especially proud to be among many individuals to come whose community contributions emulate the ideals put into action by Pete and Hedda Reid. I tip my hat to them in accepting this award and feel great knowing the Reids’ legacy will live in perpetuity.”

Harvey, who has served the college since 1990, is president of the Blue Mountain Community Foundation and an active member of Rotary and the Police Department Task Force, among other community work.

The Town-Gown award was renamed upon Pete Reid’s retirement in June 2009 to honor the longtime service of the Reids, both class of 1949.

Traditionally, the award is presented in memory of a Whitman staff or faculty member, and this year it honors the memory of David Stevens ’47, professor emeritus of economics, who was a lifelong friend of Harvey in addition to being his mentor and thesis adviser.