For one day every April, the natural academic order on campus is reversed. Students still learn, but they also teach: faculty and staff, each other and even some parents and grandparents. 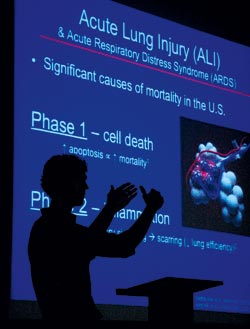 At the 10th annual Whitman Undergraduate Conference, 165 students were the faculty. They lectured in their areas of expertise, described their research modes and conclusions, and, in some cases, demonstrated musical talents and explained complicated vocal or instrumental techniques.

A fluid and appreciative audience moved to and from 10 venues on campus to attend 12-minute presentations that piqued interest and drew loyal peers, friends and family members.

Kevin Davis, father of Emily Davis ’08, said his daughter’s lecture (co-presented with Aaron David ’08) on the importance of mussels in the Klamath and Salmon rivers to members of the Karuk Tribe “is further proof of the quality of the education and the nature of the students here.” The conference itself “validates the value of Emily’s decision to come to Whitman.”

Presenters bring their work “fully into the public arena, an expectation we have of scholars,” said Lori Bettison-Varga, provost and dean of the faculty, attending her first conference. “Not only is it an opportunity to share their results with their peers, it’s an opportunity to move their work forward, to think about it differently. Comments or questions from observers might lead the student researcher to the next step in their thinking. This is what engaged scholarship is all about.”

Mark Kennedy ’09 relished the opportunity to learn about his peers’ academic work. “I may know my friend is killing himself trying to write a paper, but I don’t really know about his work,” Kennedy said, while enjoying the campus-wide picnic lunch at Reid Campus Center. He and Sarah McVicar ’09 were plotting which presentations to attend before Kennedy’s turn at the podium later in the day to discuss “Finding a Home: The Quest for Canadian Identity.” The pressure was off McVicar, who co-presented a morning session on Whitman’s Experimental Garden of low-water native plants that she and Nicole Goehring ’09 have developed adjacent to campus.

Conference attendees “get a sense of the richness of the liberal arts experience,” said Mary Anne O’Neil, professor of foreign languages and literatures (French) and the associate dean of the faculty who coordinated the inaugural conference in 1999.

This year the first panel O’Neil attended was one presented by first-year students in Core classes. “I was thrilled to see all the young students presenting very good work,” she said. “It gives them a sense of accomplishment for what they have done.” Presenting at this type of conference is a privilege, she added, that undergraduates from other colleges often don’t get until they’ve completed a master’s degree.

O’Neil said the conference thoroughly meets the spirit of what its organizers intended. “It has only gotten better and better over time,” she said. “There are more participants, larger audiences and more and more multidisciplinary panels.”

Technology probably represents the conference’s biggest evolution. Students’ research and creativity have always been on display during the poster session, but in recent years their superior computer skills also are evident in the impressive visual presentations. Technology services plays a large role, staffing each venue to ensure that student-created PowerPoint displays and other technical aspects of the conference work properly.

The first year of the conference, O’Neil recalled, things weren’t so smooth. A squirrel ran amok and knocked out power to Sherwood Center, where the midday poster session was scheduled. Undaunted, O’Neil and colleagues moved all the posters to Sherwood’s hallways, where window light illuminated them 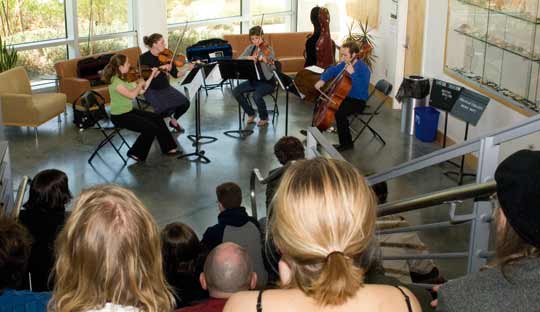