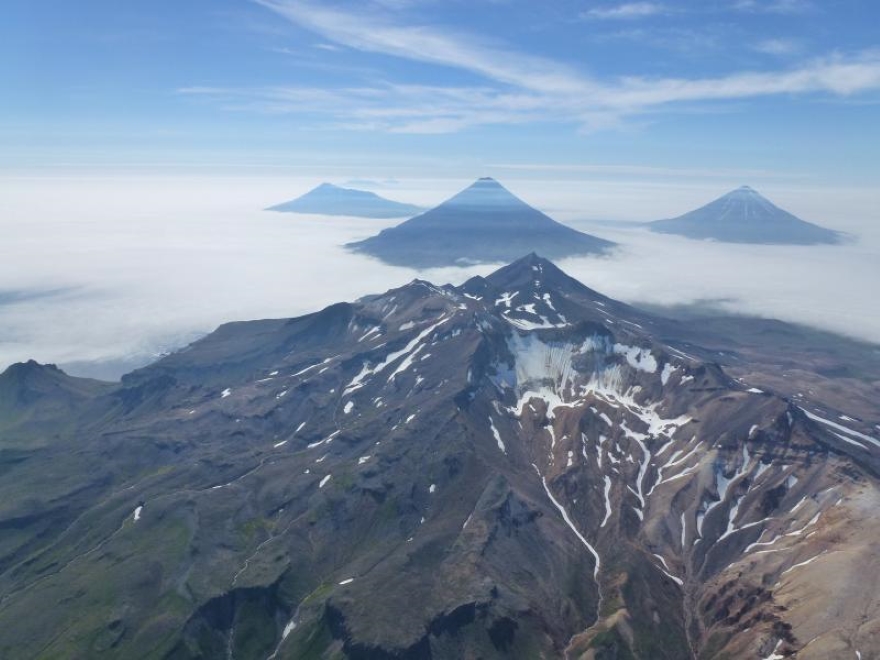 A giant volcano may be hidden beneath the waters off the southwestern coast of Alaska.

The discovery is the result of years of research by scientists from across the country including Whitman Geology Professor Kirsten Nicolaysen and her team of student researchers.

If the scientists’ hypothesis is correct, the newfound volcanic caldera would have formed in a super-eruption potentially causing harsh global consequences. The magnitude is comparable to the more extensively studied Yellowstone Caldera.

Nicolaysen and her colleagues believe the massive eruption that created the caldera left weaknesses in the crust beneath the Islands of Four Mountains in the central Aleutians. Magma can travel through these pathways to erupt from a tight group of six volcanoes named Carlisle, Cleveland, Herbert, Kagamil, Tana and Uliaga.

The research, co-authored by Nicolaysen, was presented on Dec. 7 at the 2020 American Geophysical Union Fall Meeting. Nicolaysen’s involvement with the Islands of Four Mountains dates back to her master’s research in 1992-93. Since then she has co-led two National Science Foundation funded research experiences for undergraduates to the Aleutians plus an additional expedition with three Whitman students.

“The first big expedition related to the Islands of Four Mountains grew out of conversations at two workshops during my semester sabbatical in fall 2011,” said Nicolaysen. “Between 2014 and this year, seven Whitman students completed senior research projects related to this program.” 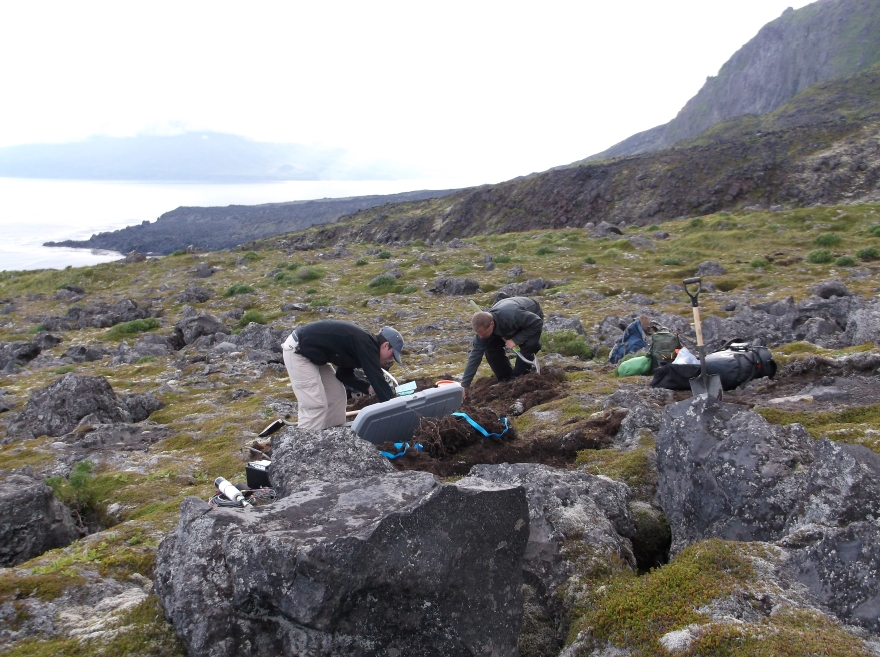 In 2014, Nicolaysen and Dr. Pavel Izbekov of the University of Alaska, Fairbanks were the first geoscientists to explore the Tana volcano with researchers from the U.S. Geological Survey (USGS). They made two exciting discoveries. The team found steam vents and hot springs, meaning the volcano was not dormant, as previously thought. They also discovered the remnants of deposits from a massive volcanic eruption. For Nicolaysen, these discoveries alluded to something: there could be a submarine caldera.

“The size seemed right based on Pavel’s extensive field experience,” said Nicolaysen. “I also thought it would explain the unusually close proximity of six significant volcanoes several of which showed evidence for volcanic activity in the last 10,000 years.” 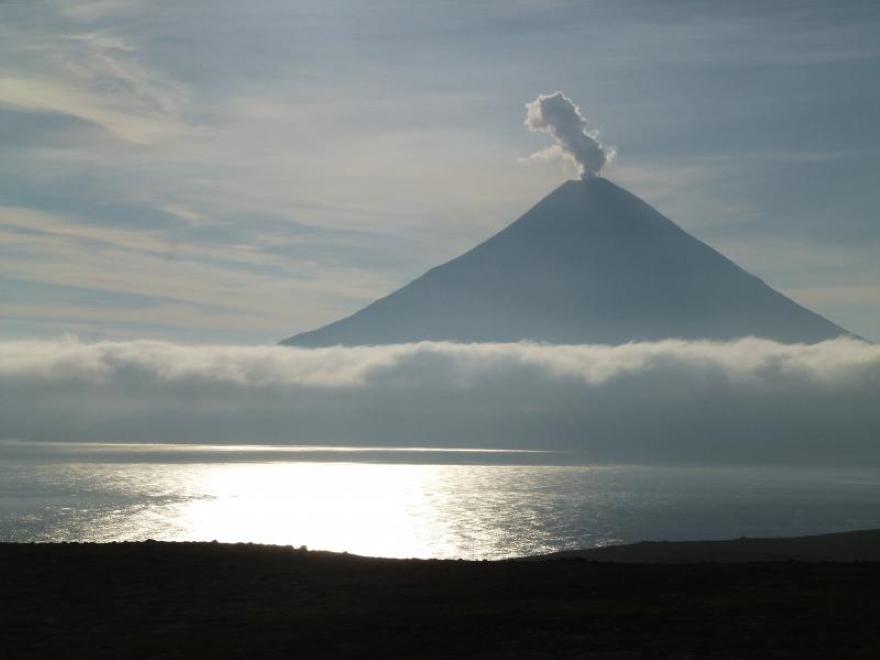 Nicolaysen proposed that a gravity data analysis, obtained by satellite, for the Islands of Four Mountains region would be a good way to test their hypothesis. She collaborated with colleagues Diana Roman and Hélène Le Mevel from the Carnegie Institute and John Power of the USGS.

“Although we have three different data sets supporting the existence of this caldera, the age of its formation, its exact geometry, and the regional impact of the eruption are still unknown,” said Nicolaysen.

It’s one of the challenges of conducting research in such a remote place. But Nicolaysen points out, it’s worth the effort. “This research really matters because this magmatic system will almost certainly discharge again in the future,” said Nicolaysen. 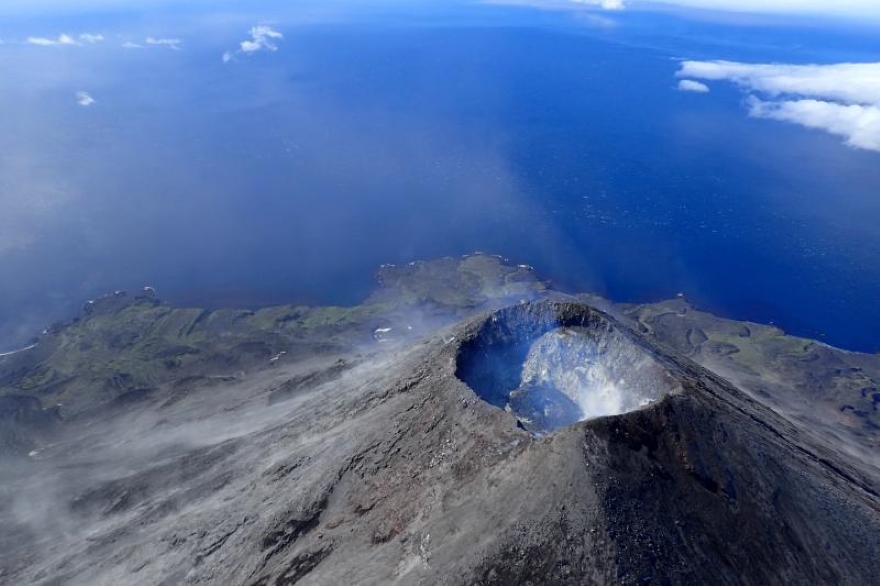 Even though all current results point to the caldera, the study team will need to return to the islands and gather more direct evidence to fully test their hypothesis. If confirmed, they would document the first underwater caldera in the Aleutians.

Nicolaysen says this is more than just an exciting new discovery about our world.  She says it holds important lessons for college students including current senior researchers Sharon Ndayambaje '21, and Nils Caliandro '21 who continue to scrutinize the samples and data from the earlier discoveries.

“In this century, science is a collaborative endeavor that depends on the skills, generosity and goodwill, clearly documented observations, and complex interpretive thinking of an international team that spans multiple disciplines,” said Nicolaysen. “My undergraduate liberal arts degree and minor in a second language have helped me enormously in my career.”