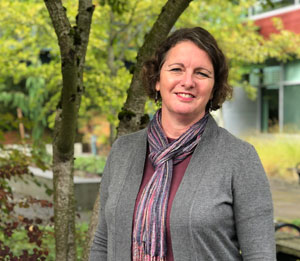 Kim Smith ’90 recalls the exact moment she envisioned her future as an environmental policy advocate. As a sociology major at Whitman College, she spotted a poster on the wall in Maxey Hall. It was for the School of Public and Environmental Affairs at Indiana University.

"I told myself, ‘That's my career.' I just knew it," Smith said. "It was a calling and I felt it very intuitively."

This fall, Smith came back to Whitman, where it all started, to give the 2019 Sava and Danica Andjelkovic Endowed Lecture: "Education for Sustainable Development: The Future Depends on Us!"

After earning her bachelor's in sociology from Whitman, Smith did indeed go on to Indiana University (IU). It was guidance Smith received at Whitman that set her on her unique path, merging her interests in sociology and environmental affairs.

Smith's expertise in — and passion for — environmental sociology has made her an international leader in sustainability education, representing the U.S. in global efforts, while also bettering her own community in Portland, Oregon.

In addition to teaching sociology at Portland Community College (PCC), Smith co-founded the Greater Portland Sustainability Education Network (GPSEN), which is acknowledged as a Regional Center of Expertise on Education for Sustainable Development by United Nations University. GPSEN aims to create and scale up solutions to address issues like climate change and other threats to our communities and planet through education, workforce training and public awareness.

Smith has taught sociology at PCC since 1996, but it was her involvement outside the classroom that changed both her outlook and teaching.

"As a professor studying and teaching social problems, we would talk about heavy topics and my students and I were all struggling," Smith said. "It is a horrible experience to see the light go out of students' eyes — to have them become apathetic or cynical or to lose hope."

"We were exploring the problems, but we weren't empowering the students to figure out how they could make a difference. And at that time, we weren't really establishing pathways to help students engage."

Then, Smith got involved with community-based learning at PCC, as an instructor and program coordinator, and that powerless feeling shifted. She began to see the possibilities of a better future where sustainability education and civic engagement could drive change.

As Smith felt more hopeful and energized, she shared that with her sociology students and colleagues. It inspired a new teaching motto for her: "Educate ˜ Empower ˜ Engage," which later became a vital part of GPSEN's mission statement.

Picking up the phone and a torch for global change

Along with her teaching and administrative duties, Smith was active in the Association for the Advancement of Sustainability in Higher Education (AASHE). In the months leading up to the United Nations Rio+20 Earth Summit, in 2012, Smith wondered if anyone from AASHE would be representing the United States — so she picked up the phone and asked.

"I said, ‘I'm on a National Science Foundation grant and have my Ph.D. in environmental sociology and policy, and I'd love to support you if I can.'"

Long story short, she landed the job. That was her first big foray into United Nations work, but not her last.

In 2014, she led the U.S. delegation to the UNESCO World Conference on Education for Sustainable Development. It was again her willingness to pick up the phone that got her the position. This time she called the U.S. State Department.

They encouraged her to put together a group of thought leaders who were doing sustainability education work in their fields. "We had seven people in our U.S. delegation — representing industry, nonprofits, the faith sector, K-12 education and higher education," she said.

And there was important work to be done. In 2015, the member states of the United Nations adopted Agenda 2030, with 17 Sustainable Development Goals (SDGs) to achieve by 2030. These aspirational goals address five areas of critical importance: people, planet, prosperity, peace and partnerships.

According to the United Nations, the SDGs are an urgent call for action by all countries — developed and developing — to engage in global partnerships. They recognize that ending poverty and other deprivations must go hand-in-hand with strategies that improve health and education, reduce inequality and spur economic growth — all while tackling climate change and working to preserve our oceans and forests.

UNESCO, or the United Nations Educational, Scientific and Cultural Organization, focuses in particular on Goal 4 — Quality Education — and education for sustainable development (ESD). They have recently adopted a decade-long international initiative, which will be launched in 2020: ESD for 2030.

While the United States pulled out of UNESCO as an official member at the end of 2018, regional networks, like GPSEN, continue to implement ESD efforts in their institutions and communities.

Grateful for her Whitman Experience

Smith has seen the power in connecting people and causes for the greater good, and she's not ready to give up. She also credits her alma mater for some of her bold tenacity.

"At Whitman, there are so many opportunities to be engaged and nurture leadership skills," Smith said. "I worked at the Student Health Center. I was a resident assistant and teaching assistant. I did volleyball stats. I ran a bunch of clubs and I was even a D.J. Whitman was small enough that there wasn't necessarily a fear of trying."

Whitman even played a small role in the creation of the United Nations' SDGs. A few years ago, during a visit to campus to speak to sociology students, Smith went to Penrose Library to work on the higher education aspects of the education goal. She remembers it was a bit surreal.

"I was in the library, sitting in a beanbag chair, editing the international education goal ... thinking about how my life got here from that day in Maxey Hall."

‘We all need to work together’

Smith believes education is the ultimate mechanism for saving the planet and humanity.

Join the cause! Smith offers five steps you could take now:

Created by Vojislav Andjelkovic '94, the Andjelkovic Lecture is in its 19th year and is part of a series of lectures presented by the Student Engagement Center to showcase Whitman alumni and their career paths.