Christine Lanphere '86 Shows Off her Passion for Teaching

/ ... / Newsroom Archive 2015 Christine Lanphere '86 Shows Off her Passion for Teaching 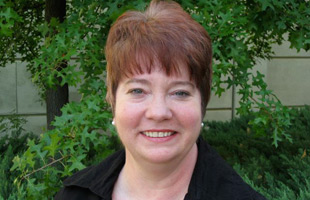 During the second week of April, Christine Lanphere ’86 visited Whitman’s campus to meet with students and give a presentation titled “Creating Global Citizens: World Language Education and College and Career-Ready Students.”

In a break in her day, Lanphere shared words of wisdom about her Whitman experience, her post-graduate journey and her campus visit.

“Whitman was a really good fit for me,” Lanphere said. “There was a lot of personal attention from my professors. Even if you were in a class of 100 students in Maxey Auditorium, it felt really small. The faculty that were here were passionate about what they did, engaged in the students and forging those personal connections. Those connections were really important to me.”

As graduation approached, Lanphere started to get the usual end-of-college questions: What are you going to do with your degree? For many, they thought that she would teach French. But that was not on her to-do list.

Lanphere graduated Whitman having been accepted to the Monterey Institute of International Studies to get an M.A. in translation and interpretation. She was the first of her major to go that route.

“I was really looking for a practical application of my major that was not teaching,” she said.

But ultimately, it didn’t work out. Lanphere failed a critical exam in her program.

So she had to rethink her options. She took a job in the Monterey hospitality industry and stayed for a few years, briefly thinking about making a career out of hospitality and tourism.

“Then someone offered me a training job, teaching new employees, and I remembered what people said to me when I was graduating from Whitman. So oddly enough, I got started with my career when I was 29 or 30. It worked for me because I had more life experience.”

Lanphere loved the training she got from going through the translation and interpretation program, but she was glad that she took a different direction.

“I wanted something that was face-to-face, interpersonal,” she said. “Interpretation and translation wasn’t going to be that because even if I learned enough languages to do interpreting, you’re a fly on the wall—you’re not engaged in the conversation at all. I think that would have been challenging for me.”

In 1992, Lanphere got her teaching certification. In 2007, the American Council on the Teaching of Foreign Languages (ACTFL) named her National Language Teacher of the Year.

“In teaching and working with students, and hopefully affecting their lives positively, I realize how many lives I’ve touched.”

Lanphere was the second ACTFL Teacher of the Year, and there have now been 10 for teachers of foreign languages. With this distinction, ACTFL hoped to create a national spokesperson, someone who is articulate and can talk to policymakers.

“Being a spokesperson has been a game-changer for my career and opened the door for me to serve on a state board which recommended the adoption of curriculum materials for all areas to the California State Board of Educations curriculum materials for all areas offering opportunities to engage in policy making at the state level. I never thought I would do that, but it was that step in my career that launched that,” she said.

While teaching, Lanphere has become passionate about what she called 21st Century Skills.

Recently, businesses have partnered with organizations like ACTFL to combat concerns about employees coming into work with all of the specific skills necessary for the job, but lacking in general skills like communication and problem-solving. As a result, ACTFL has incorporated a map of skills that are being infused into our education system.

An example would be practicing accountability skills or communication skills in a fourth grade math class. There are still content standards and certain things that need to be taught at grade level, but this adds a layer to teaching that gives students the skills to succeed in the working world.

“When you think about it, it’s what our modern businesses need and are expecting. If we’re trying to run a business that doesn’t have accountability and problem-solving, then it’s going to crater,” Lanphere said. “The sales manager, the secretary, the CEO—everybody needs to have the capacity to problem-solve.”

Coming back to Whitman, Lanphere arrived just in time to participate in the annual Whitman Undergraduate Conference—something that was not a part of her experience as a student.

“It was so exciting for me to watch students get up there. Everyone knew what they were talking about, they were interesting presentations, and I learned a lot.”

She gives a lot of professional presentations for her work and for National Teacher of the Year, and was impressed with the professionalism, passion and knowledge of the presenters.

Does she have any advice for current Whitman students?

“You shouldn’t be afraid of the possibility of failure. And try not to let your future career dictate what you’re going to study. It doesn’t matter; you can study anything you want. Try not to uber-plan. Something might happen like what happened to me, and you need to be able to bounce back.”