Click here for a photo gallery of the 2013 Whitman Undergraduate Conference.

Do the math: 215 presenters, 39 musicians, 27 posters, 13 podcasts. It all adds up to a graduate school level academic conference featuring undergrads – Whitman students.

During the 15th Annual Whitman Undergraduate Conference April 9, students from every academic discipline became the teachers, and the rest of the campus community members were avid pupils in a day dedicated to scholarship and creativity.

"Listening to scientists, sociologists, activists and environmentalists pushing at the boundaries of their respective disciplines, I was reminded of the common goals we are working toward and the tremendous value of an education that encourages the sharing of ideas," said Ben Lerchin '13, an art major from Novato, Calif. 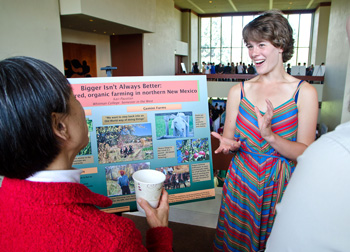 Kari Paustian '14 presents her research on draft-powered organic farming in New Mexico. She and 12 other students from Whitman's Semester in the West program brought their field experiences to life with podcasts produced for National Public Lands Radio.

Every year, scheduled classes give way to the conference, and the Whitman campus is transformed to accommodate a full day of student lectures, poster presentations, music performances and art exhibitions. This year, more than 200 students took the opportunity to present original research from course work, senior theses, study abroad experiences, fellowships, internships and independent projects.

"It makes me want to be in class again," said Keith Raether, director of fellowships and grants and conference organizer. "Every year I'm astonished by the depth and diversity of the research, and by the sense of discovery conveyed by the presenters. I was also happy to see so many members of the campus community in the audience."

Research topics are limitless, and this year the wide spectrum included the Affordable Health Care Act, experimental lava flows, the influence of oceanic conditions on coral reef, mental health services in Walla Walla and the mining industry in Thailand.

There was also a particular emphasis on critically analyzing film, television and online media, highlighting the rising popularity of Whitman's Film and Media Studies program. In these well-attended talks, students examined representations of race, gender and sexuality in shows like "It's Always Sunny in Philadelphia," "Modern Family," "True Blood" and "That's So Raven."

“Every panel I attended was a call to action. I left the conference energized and with a strong sense of intellectual camaraderie.”
— Ben Lerchin '13

"I was really impressed with my students' ability to translate their in-depth, thoroughly contextualized, semester-long studies into 15-minute presentations that were accessible to a large audience-while at the same time retaining their theoretical rigor and provocative arguments," said Anne Petersen, visiting assistant professor of film and media studies, who served as a faculty sponsor.

"I loved seeing film and media studies majors demonstrate their knowledge and passion about their area of study, but I also loved seeing students with diverse majors demonstrate their varied interests," she said. "One of the student presenters was a math major who took Intro to Television in the fall and wrote a brilliant paper on 'My Big Fat American Gypsy Wedding,' which she decided to present at the conference. She told me that her friends were surprised – 'aren't you a math major?!' So by presenting the paper, she also presented herself to her friends, and the faculty at large, as someone with diverse yet equally compelling passions and interests. The liberal arts model in action!"

Jade Blake-Whitney '15, a film and media studies major from Lake Forest Park, Wash., who presented on "The Cleveland Show," moderated the panel on "Television and Its Discontents."

"I feel really good that I was able to contribute valid arguments and present alongside my peers," Blake-Whitney said. "At first I was nervous, but then I realized that I'd actually worked really hard on the paper my presentation was based on, and I'd practiced it enough that my sentiment changed from being nervous to just excitement. I had the chance to share my opinions and findings with people who chose to come to my talk – why wouldn't I want to share? I also really like the idea of supporting your friends and classmates. It allows your friends to see a different side of you!"

Lerchin also appreciated the opportunity to learn from his peers.

"Every panel I attended was a call to action," he said. "There is a tremendous yearning to reframe and reconceptualize nature, to work outside the boundaries of the classroom in innovative ways, and to apply rigorous theoretical approaches to hands-on work. I left the conference energized and with a strong sense of intellectual camaraderie."

Nicholas Chow '13 presents his research project titled, "Chicken of the Sea: What Feathers Can Tell Us About Corals" during a panel on marine life.