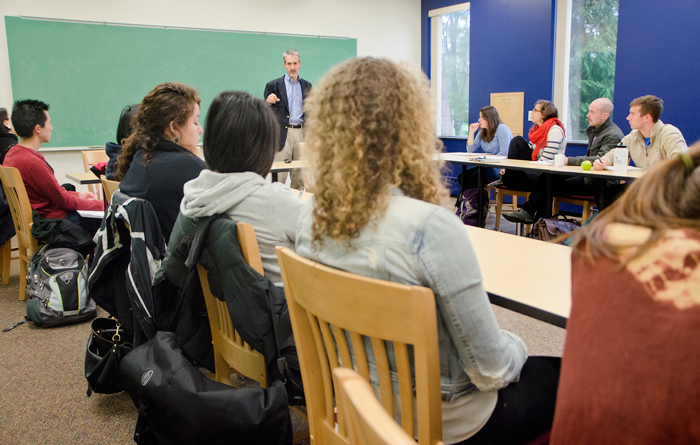 Award-winning author, New York Times columnist and Columbia Graduate School of Journalism professor Samuel G. Freedman visited Whitman College last month to talk about his most recent book, "Breaking the Line: The Season in Black College Football that Transformed the Sport and Changed the Course of Civil Rights." Freedman shared thoughts on the legacy of the civil rights movement, his new book and the state of journalism.

Your book talk helped kick off the third year of Whitman Teaches the Movement. What is the most important thing that we should be teaching school and college students about the Civil Rights Movement?

As I said earlier, we need to know how risky and brave the effort was, and how uncertain the results were. It's also important not just to focus on great leaders but to see how many other activists played integral roles. And I think we tend to think of it as a secular movement that only coincidentally involved churches and clergy, when in fact the movement cannot properly be understood without understanding African-American liberation theology and the historic role of the black church.

Do you think the public awareness or perception of the civil rights movement has changed or diminished among the "millennial" generation?

I think there's an awareness of it as a historical era, and certainly there's an awareness of leaders like Dr. King and Malcolm X. What is harder for young people to appreciate is how much the outcome of the civil rights struggle was in doubt. We all tend to see the events through the knowledge that the movement succeeded. But that was never a given.

How do you think discrimination manifests itself in football today? How is that different to how it manifested itself in the 1960s?

In the 1960s, there were no black quarterbacks, coaches or general managers in the NFL. And the absence of them was evidence of the bigoted "conventional wisdom" that blacks were less intelligent than whites. In the South, college teams were entirely segregated and the success of all-white teams like Alabama was construed as proof of white supremacy. Today, the NFL is better, with many black quarterbacks, coaches, general managers. That improvement in part attests to a successful affirmative action plan. Among the major colleges, however, only about 10 percent of head coaches are black, and the graduation rate for black athletes at major schools is unacceptably low.

Do you see any revolutionary moments for football or other sports on the horizon?

I don't know about revolutionary, but there's a clearly an ongoing discussion/debate about paying or somehow compensating NCAA student-athletes whose exploits make big money for everyone but themselves. And the recent boycott by the Grambling football team was admirable. The team helped throw light on the appalling cuts in higher education funding in Louisiana.

How do you think the landscape of journalism has changed in the past decade?

In some ways, of course, it has changed radically with the digital revolution and the financial challenges to legacy news organizations - everything from Craigslist taking away classified ads to browsing for free content taking away newsstand and subscription sales. But journalism has weathered technological advances before - radio, TV, 24-hour cable news. The vital mission is to keep the journalistic values of impartial reporting and ethical conduct intact, no matter what the delivery system of news.

What advice would you give to undergraduates who might be thinking about a career in journalism?

Become fluent in as many delivery systems as possible, because the era of specializing in a genre (print, TV, etc.) is over. And get a great liberal arts education. Learning how to produce a news article or broadcast or website is easy compared to developing a genuine intellectual curiosity.

How did Whitman College end up on your book tour schedule?

I had interviewed [Assistant Dean for Student Engagement] Noah Leavitt and [Associate Professor of Sociology] Helen Kim for my New York Times column back in the summer of 2012, and in subsequent conversations Noah had mentioned the possibility of speaking at Whitman. With the topic of my book, it struck him that my lecture could fit in well with Whitman Teaches the Movement.

What were your impressions of the Whitman students whom you met and who attended your talk?
Sharp, inquisitive, well-informed. More aware of civil rights history than many other college groups to which I've spoken.