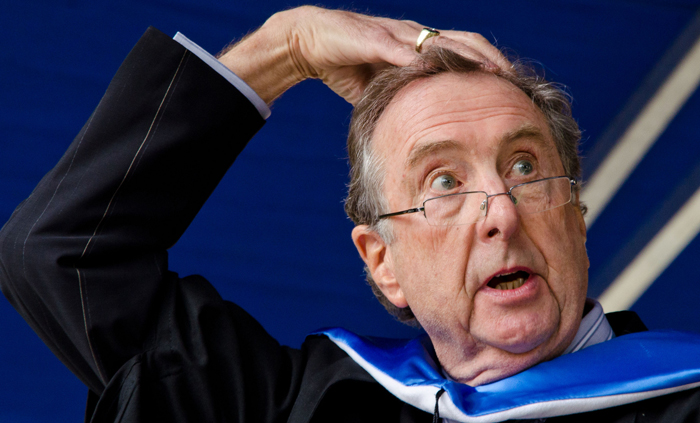 One of the biggest laughs came after telling a fart joke.

The former member of Monty Python’s Flying Circus and creator of the hit Broadway musical “Spamalot” roused the crowd of an estimated 4,000 on Sunday, May 19, by recounting a joke about the Queen, who was traveling with the Nigerian president in a horse-drawn carriage on the way to a public banquet when one of the horses expelled gas.

“’I’m terribly sorry,’ said the Queen. "‘That’s alright,’ said the president. ‘I thought it was the horse.’”

Speaking (and riffing) on the Memorial Building’s south lawn beneath the renowned clock tower, Idle also sang his iconic song, “Always Look on the Bright Side of Life,” which he most recently performed at the closing ceremony of the 2012 Summer Olympics. 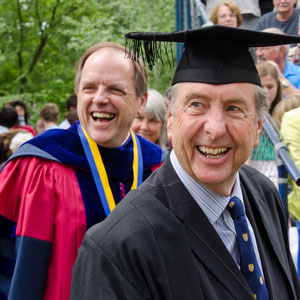 "The song really caught me off guard,” said Nancy Gilbert, whose son Adam Gilbert ’13 graduated with a degree in astronomy.

“Eric Idle was fabulous,” she said.

Idle’s Commencement speech crowned a celebratory weekend of activities, which included the Class of 1963’s 50th reunion and Baccalaureate.

“Graduation day is one of those days you will remember until the day you forget,” joked Idle, who received an honorary Doctor of Humane Letters from Whitman and had the privilege of presenting his daughter Lily Idle ’13 with her diploma.

Idle went on to tell the Class of 2013 that they should not just pursue happiness but “catch it.”

Zoe Ingerson ’13, an anthropology major from Boulder, Colo., will pursue happiness next fall by attending Stanford Graduate School of Education.

“It’s all kind of a blur," Ingerson said about Commencement. “It was really special.”

Nancy Serrurier, vice chair of the Board of Trustees, kicked off Sunday’s ceremony by welcoming back the Class of 1963. President George S. Bridges then addressed the 371 graduates who walked, offering them praise for earning their undergraduate degrees.

President Bridges touched on the diversity of the graduating class of 2013, noting that Whitman’s newest alumni come from 14 foreign countries, ranging from Guatemala to Ethiopia, and 32 states, from California to Maine. Twelve percent are first-generation graduates, and five members of the Class of 2013 are natives of Walla Walla.

President Bridges then turned the stage over to senior class speaker Thomas Knook ’13, a sociology major from Marlow, UK, who told graduates that failure is a valuable part of life.

“It might seem incongruous to be talking about failure at Commencement, an event which is traditionally one of the more significant markers of achievement. But, more than anything, what I have learnt at Whitman is that success and failure go hand in hand,” Knook said.

In his comical speech, Knook noted failure is inevitable by chiding Mr. Idle about the film “Nuns On The Run.” Knook argued that everyone fails, so “how we react to it is, therefore, crucial.

“Thankfully, this response is a skill that can be learnt and taught, and is the unlikely byproduct of a Whitman education; the development of agile, self-aware, latitudinal and critical thinking and effective writing and speaking allow us to rebound quickly from disappointment.”

In addition to Idle, Morten Lauridsen '65 also received an honorary Doctor of Humane Letters. Considered one of America's greatest contemporary composers of choral music, Lauridsen’s acclaimed choral works and song cycles have established him as one of the most-performed living composers in the country. His works have been recorded on more than 200 CDs, several of which have received Grammy nominations. In 2007, he received the National Medal of Arts, the highest award given to artists and arts patrons by the United States government. 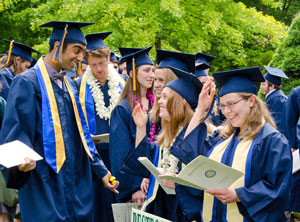 When introducing Lauridsen, President Bridges mentioned what Dana Gioia, poet and chairman of the National Endowment for the Arts from 2003 to 2009, said in a 2012 documentary on Lauridsen’s life. “Morten Lauridsen seems, to me, one of the few living composers whom I would call great,” Gioia said in the documentary.

During the ceremony, seven faculty members were recognized as recipients of 2012 Distinguished Faculty Awards for mentoring, advising, teaching and scholarship. These awards reflect the highest recognition of Whitman College faculty excellence. The faculty members were: