As the keynote speaker for the 2020 Power & Privilege Symposium, Davis spoke broadly about systems of inequity and injustice, both in the U.S. and abroad, while also sharing her own story and her work in the prison abolitionist movement.

She called on the audience to acknowledge the deep-seated biases and systemic injustices in our communities, institutions and policies.

Davis’ message of the need to address broader issues collectively resonated with the audience, who snapped fingers frequently in agreement.

“I think the distinction about diversity and inclusion, and requiring transformation and justice, for me that is one of the pieces that can be missing,” said Thomas Witherspoon, vice president for Diversity and Inclusion at Whitman. “The way she connected those things was so important. We have to unpack those systems in order to create an inclusive and equitable community.” 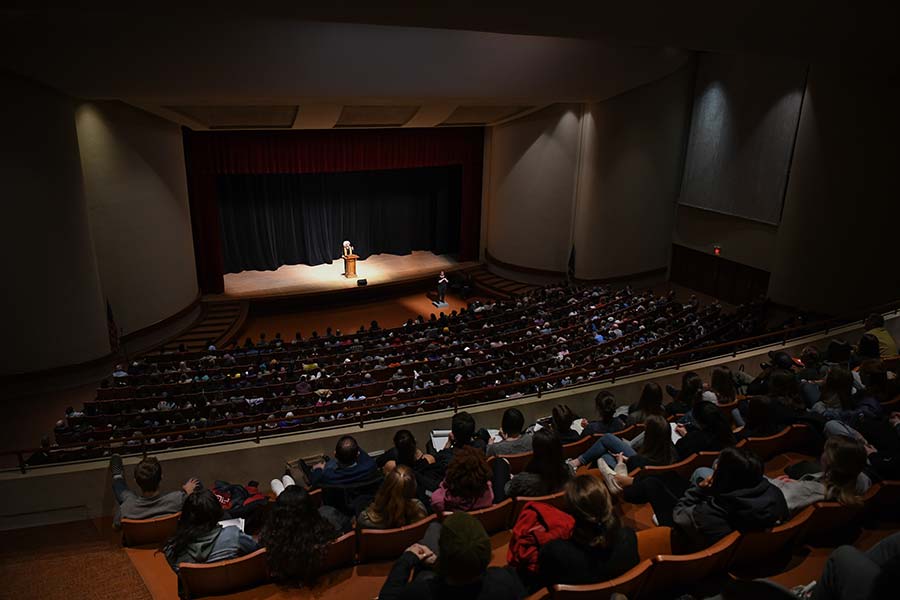 Coming Together for Hope and Change

The theme for this year’s Power & Privilege Symposium is “Building Bridges.”

“Building community is not easy,” she said. It is made more difficult by the existing structures in society that perpetuate injustice.

But Davis’ message was one of encouraging activism and hope. She reflected on how her own spirit was buoyed during her incarceration in the 1970s on murder charges. Before being acquitted, Davis faced the possibility of the death penalty.

“When I first engaged with the fact that I was facing the death penalty, the overwhelming emotion was fear,” Davis said. “However, as the movement to free me grew … that solidarity overshadowed the fear. I did come to realize that even if I was sentenced to death, I would not be alone. … I would be accompanied by thousands and millions displaying collective courage.

“That is why we organize,” Davis said. “The collective is our source of power and courage.”

Through her work to bring change to the prison industrial complex, Davis said she has seen progress. In the 1990s, when she helped co-found the prison abolition group Critical Resistance, people were very reluctant to engage in discussion about law and order.

“Now, everyone is talking about that something needs to be done,” she said. “The terrain has changed considerably.”

It’s important however, she noted, to not just advocate for change, but to also have some thoughts about the ideal future.

“We can’t simply be opposed, we have to have a vision for what we want, what kind of society we want,” she said.

She called on the audience to remember that movements begin small, affecting change in the communities that can be most impacted by it.

“Many of us are still under the impression that historical transformation takes place because these great men somehow affect this change,” she said, noting that the civil rights movement grew from the efforts of countless individuals, including many women, who are not recognized by the historic record.

Recent social changes and activism have opened doors for people to question other systems of inequality and oppression, Davis noted. For example, the transgender community brought forth challenges to the traditional gender binary, and that creates opportunities to question other assumptions of identity and privilege.

During a short Q&A following the lecture, students asked Davis for tips on building bridges, the role of nonprofit work in the prison abolition movement and the greatest challenges society faces in acknowledging difference.

For each, Davis acknowledge there is no one correct answer, and challenged the audience to think beyond the one-side-or-another limitations of Western thought.

“We should learn to inhabit contradictions and not feel compelled to get rid of one side,” she said. “The question should be how are all the issues interconnected, and interrelated? If we can create community that doesn’t stifle difference, then individuality flourishes.”

Freedom Songs 2021 Celebrates Diverse Voices From Around the Globe

Where We All Belong: Meet Whitman’s First Inclusion Fellows