Graduating senior Andy Burnstein ’20 has advice for Whitman College students coming behind him: Get involved in the community.

Register to vote in Walla Walla. Give back through local organizations. Be part of the city and culture.

“Many Whitman students feel separate from the community, which is really unfortunate,” Burnstein said.

Popping the “Whitman bubble” has been a common thread throughout Burnstein’s time in Walla Walla. As an incoming first-year from Redmond, Washington, he participated in the SCORE preorientation program, which focuses on community service, and later became a leader.

“It just really made me fall in love with Walla Walla, it really inspired me to keep doing service,” he said.

During his first two years at Whitman, Burnstein also became passionate about Whitman Teaches the Movement (WTTM), which brings age-appropriate civil rights and social justice lessons to students in K-12 schools in Walla Walla. In WTTM, the history major found a program that blends his interests.

“It was a combination of so many things I care about — community service, social justice, education, history,” he said. “It was great because you get to be so intentional about the lesson that you teach.”

For 2019-2020, Burnstein served as co-program leader for WTTM, and worked to revamp curriculum for the third-grade lesson.

That was particularly rewarding, because Burnstein didn’t see the children’s book in the existing lesson as adequate. “The book we used very much felt like all white people need to do is be nice — and that’s not really enough.”

This year, third-graders at Green Park Elementary heard a lesson based around the book “We Came to America” by African American artist Faith Ringgold. The book uses beautiful illustrations to show the various ways people have come to America — from slavery to escaping religious persecution to modern immigration, as well as indigenous populations.

“It’s a deceptively simple book, but when you get right down to it, it’s actually very hard to define ‘country’ or define ‘race’ for a third-grader,” Burnstein said. The lesson taught the students about the social constructions of race, and the stereotypes that pair with it.

“It was great to celebrate the diversity of the classroom, and see how the class understands that their peers come from diverse backgrounds — and that’s a good thing,” he said.

In fall 2019, Burnstein and his co-leader Ameliz Price-Dominguez ’22 expanded the WTTM curriculum even more by taking lessons into the Walla Walla Juvenile Justice Center. They began by teaching one lesson at the center every week. They hope that part of the program continues in the future.

Burnstein was recognized for his service to the community with the Outstanding Civic Leader Award through the Students Serving Washington Awards program, a division of the nonprofit Campus Compact. Campus Compact helps colleges educate students for civic and social responsibility

“The moments at Whitman that have really stuck out to me, whether it was teaching a Whitman Teaches the Movement class with other students, or canvassing different Walla Walla neighborhoods, or doing voter registration out of Prentiss Dining Hall, or training for SCORE – it’s doing good work with good people,” Burnstein said. “It makes you feel at home and makes you feel like you’re part of the community. It’s collaborating with others to make the world a slightly better place, in a community where you can really get to know people because it is small. It’s just like a really rare special thing.”

Using History to Understand the World

“I liked history in high school, and I heard Prof. Schmitz was a big deal. So, I was like, ‘If he’s such a big deal, I might as well take the class because it’s hard to get into,” he said. “Then I just really fell in love with history.”

History serves as a way to understand the world, and cuts through the fog people use to obscure the truth, Burnstein said.

“It’s such a human major. You’re really studying people and their motivations,” he said.

Burnstein was able to get a closer look at history in the summer of 2017 as an intern for the Washington State Holocaust Center for Humanity. Burnstein’s grandmother survived the Holocaust, and as a child, he appeared in a video the center produced. During his internship, funded by the Whitman Internship Grant, Burnstein worked to create an encyclopedia of local Holocaust survivors and liberators.

After graduation, Burnstein plans to make the world better by participating in the political process. In the summer of 2019, he campaigned for presidential candidate Sen. Elizabeth Warren, who he has met twice. That fall, he worked to do voter registration in Walla Walla.

‘You Should Care About the Place You Live’

This spring, Burnstein led a Power & Privilege Symposium session with other student volunteers from Student Engagement Center programs. Their session focused on “popping the bubble” and building bridges in the community.

It’s a point he feels strongly about.

“There’s the stereotype that Whitman students go off and ski every weekend. And that’s fine – skiing’s great,” he said. “But you’re here for four years. That’s a long time. You should care about the place where you live. I think it’s that simple.”

He wants to see more students at Whitman get involved, not only in service programs or political activism, but also because he believes Walla Walla is a great community to live in.

“I really hope that any students who come to Whitman in the future will come not just because they love Whitman, but also because they realize there’s something special about Walla Walla,” he said. “Where else do you get to run in to people you genuinely care about and enjoy seeing every day? It’s a rare thing in life, I think.” 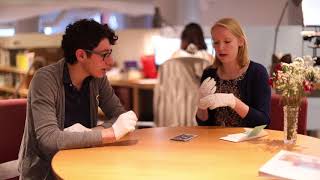