Though books and lectures are the foundations of traditional academic learning, some lessons require hands-on experience.

Jessica Boyers '20 and Professor Michelle Janning are creating an opportunity for Whitman students and local young adults with intellectual and developmental disabilities to take advantage of all of the above. With lessons from the instructors - and from each other - they'll learn what it means to be an inclusive community.

Growing up in Davis, California, with her parents and her older sister, Boyers was always active, playing multiple sports and working part-time.

"I've always loved being around people," said Boyers, who is majoring in chemistry.
Meanwhile, she noticed a family member with disabilities was often excluded from social gatherings and struggled to find a sense of belonging. This made Boyers acutely aware of how fortunate she was.

It also inspired her to be a change agent.

"I wanted to invest my time in making sure that people feel included," she said. As a first-year student, Boyers joined the Buddy Program, a student-led initiative through the Student Engagement Center (SEC) that gives Whitman students and Walla Walla adults with intellectual and developmental disabilities the chance to forge friendships through social and recreational activities. She interned at the Walla Walla Valley Disability Network this summer and now serves as the Buddy Program coordinator.

Boyers dreamed of having a course that would give Whitman students and members of the disability community an opportunity to explore issues of community, ability and inclusion in an academic setting.

"Whitman focuses so much on diversity," she said, citing the college's commitment to racial and socioeconomic diversity. "But there's this whole population we don't think of as often."

Boyers found a mechanism to make the course a reality through the Ben Rabinowitz Award, which is run through the SEC. Given in honor of former Whitman College President Tom Cronin, the award offers financial support to students seeking to create programs or learning initiatives that promote compassion in medicine or politics and enrich the Whitman community. Today, the SEC supports several student-led initiatives that were brought to life by Rabinowitz recipients, including the Buddy Program.

When she applied for the award, teaming up with the local disability community was Boyers' top priority.

"Community means everything to me." she said. "The whole goal of school is working with other people and learning and listening and having open perspectives."

Thanks to programs run by the SEC - including the Rabinowitz award, Whitman Internship Grant program, Community Fellows, and numerous student-led volunteer opportunities — students have the opportunity to learn from and collaborate with myriad Walla Walla community partners.

"The SEC helps students like Jess take their energy and knowledge and turn that into something that lets them contribute and learn, make connections with people, develop compassion and develop professional chops," SEC Director Noah Leavitt said.

Boyers' motivation to apply for the Ben Rabinowitz Award was simple: "I'd like for all people to feel that they're valued for who they are without judgment."

Other Rabinowitz awardees shared similar goals and worked with the SEC to accomplish them. Freedom Songs, an annual community-focused concert featuring performances by artists of color, encourages attendees to rethink the messages behind the music.

"The goal of Freedom Songs is to have listeners develop empathy and compassion," Leavitt said.

Leavitt remembered seeing Boyers' application and thinking, "Oh my gosh, it's like the ‘Generation Two' of the Buddy Program."

He loved that her proposal built on the work of previous Rabinowitz awards.

"This was something that had been made possible through Rabinowitz funding and going further with it in a way that wasn't possible when the Buddy Program had been created," Leavitt said. 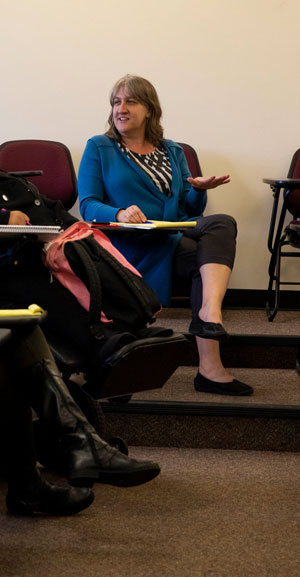 During the application process, Boyers sought out sociology Professor Michelle Janning to teach the course. Janning remembered Boyers walking into her office and explaining her idea: She envisioned Whitman students learning about community and inclusion alongside members of the Walla Walla disability community. But she needed help putting it in the context of an academic class. They started brainstorming.

"My first thought is usually ‘Let me see if I have time,' but for some reason, this topic, this idea was just always ‘Yes,'" Janning said.

Their initial meeting would be the foundation for a special topics sociology course titled "Defining Ability and Developing Community," which was offered for the first time this fall. Supported by the Ben Rabinowitz Award and funding Janning secured through the college's Andrew W. Mellon Foundation grant, the course lets Whitman students and Walla Walla Valley young adults, including those who are on the autism spectrum, have Down syndrome and/or carry a diagnosis of anxiety, study community, inclusion and ability using a sociological lens - together.

While Boyers brought her own ideas about topics she wanted to cover, Janning worked with her to frame it as a sociology class.

"And by that I mean it's not a class on what does it mean to have autism or to have a visual impairment," said Janning. "It's a class about how we socially define what ability is and how there are ways in which our definitions either enhance or inhibit the development of community."

Already familiar with many Buddy Program participants, Boyers hoped to include those not already involved in the Whitman community in order to reach people who lacked opportunities to participate socially. To help them target young adults in the community who would benefit from the class, Janning and Boyers enlisted Cyndy Knight, director of the Walla Walla Valley Disability Network.

When they presented their idea to Knight, she said yes immediately.

"We were super excited," Knight said.

The Disability Network works with more than 400 families, and Knight knew identifying just eight students to participate would be difficult. To help, she introduced Janning and Boyers to Jacob Butenhoff, who teaches in Walla Walla High School's STEP program (Students Transitioning into Employment Possibilities). Designed for students ages 18-21 with intellectual and developmental disabilities, STEP helps young adults develop vocational skills, participate in community activities, access transportation, and enrich their social skills through classroom and community participation. With Butenhoff on board, "it became a partnership of four," Knight explained. Janning served as as the faculty instructor, while Knight, Butenhof and Boyers co-facilitated this fall's course.

The class illuminates the everyday lived experiences of people with disabilities. Through discussions, field trips to workplaces and homes of Walla Walla residents with disabilities, guest speakers, collaborative learning and projects, students gain an understanding of how community, citizenship and ability come to be collectively defined.

The students may be learning more from each other than they are from Boyers and her team.
"Rather than an approach of ‘I'm here to serve you,' Whitman students are amazing at cultivating an attitude of ‘I'm here to learn from you,'" Knight said.

Meanwhile, the STEP students' perspectives are expanding, too. Knight said simply stepping onto Whitman's campus and seeing themselves as "a college kid" opens their minds to new possibilities.

"We have planted the idea that students with intellectual and developmental disabilities can attend higher education," she said.

Meanwhile, through weekly classes, Boyers hopes participants create meaningful connections. Those connections lay the groundwork for the kinds of conversations that lead to the community-building that's at the heart of both the Ben Rabinowitz Award and the SEC.

"It seems to me that disability is almost a taboo-type subject," Boyers said. "Discussion is valuable and allows for growth as we strive to create an inclusive society."

*Top photo: Students enrolled in the sociology course SOC 294: Defining Ability and Developing Community give each other a fist-bump during class in October