When Anne-Marie Zell Schwerin ’85 was a senior at Whitman College, she had her first encounter with “the Whitman bubble.”

“I remember when I moved off campus, I lived on Birch. I had a group of friends who had dinner at one another’s apartments, and there were students in my friend group who weren’t sure how to get to Birch Street,” Schwerin said. “So, the Whitman bubble was real. It was tight.”

Now executive director of the YWCA of Walla Walla, Schwerin is working closely with Whitman and the Student Engagement Center to expand the bubble through community service and internships.

Her passion for service and working with Whitman students stems from her own experience as a student. Schwerin transferred to Whitman as a junior, and found more than just a place to earn a degree, she discovered a community that was devoted to broadening a student’s approach as to how they walk in society. 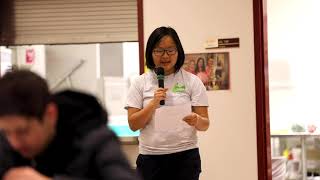 Dozens of Whitman students participate in community-based internships each year. This year, Erina Horikawa '19 is helping area children learn about healthy eating and where food comes from with the Walla Walla Valley Farm to School Program.

“The No. 1 benefit of a liberal arts education is it should open you up to the world and your heart as well, and Whitman does that better than any other place I’ve ever been,” Schwerin said. “It’s the spirit of this college, and I carry it with me.”

Schwerin said Whitman’s commitment to turning out leaders with open minds, open hearts and the willingness to be adventurous helped prepare her for her role at the YWCA. She also knows that when she hires interns from the college, they’ll bring those same skills with them.

This year, one of those interns is Maeve McCracken ’19, a sociology and French major. McCracken assists Jessica Matthews, who serves the Whitman campus as the YWCA’s domestic violence and sexual assault advocate. As part of her internship, McCracken shadows Matthews at her office in Hunter or at the women’s shelter, learning skills that she can apply directly after graduation while providing aide to those in Walla Walla who are at risk.

“We’re not doctors, lawyers or therapists, we do advocacy-based counseling,” McCracken said. “After going through training, being able to sort of be in the field and actively participate in shadowing, I’ve learned a lot of different ways to respond to situations, how to listen actively to clients and be compassionate.”

Along with shadowing Matthews, McCracken also shadows other advocates when they attend court each Friday as the judge hears dockets for sexual assault and domestic violence cases.

“I’m hopefully going into the field of education policy, so I think that it’s especially important to recognize that people are starting in very different places, and helping them by providing them with the resources to get themselves to where they need to be has probably been the most crucial thing that I’ve learned,” she said.

Whitman’s Community Fellow Program began in 2012 and finances a group of juniors and seniors to spend an academic year working part time at a Walla Walla Valley organization to address some of the area’s social, economic and cultural challenges. The fellows meet leaders in Walla Walla and receive professional mentoring, career development guidance, and exposure to local organizations in addition to the one where they work.

The Community Fellow Program is supported in large part thanks to a grant from the Donald and Virginia Sherwood Internship Endowment. Its community partners include ArtWalla, Port of Walla Walla, Planned Parenthood of Greater Washington and Northern Idaho, Walla Walla Valley Farm to School and Walla Walla County Corrections Department.

Whitman’s Internship Grant Program started in 1999 and provides funding for students who submit strong applications to participate in unpaid internship experiences at both for-profit and nonprofit organizations as well as government agencies. The Student Engagement Center funded 152 interns, 143 of whom received internships in the U.S., while nine were abroad; of the U.S. internships, 36 students interned within the Walla Walla Valley.

“These internships align so closely with students’ academic and career interests. Students are able to test out theoretical concepts, apply classroom knowledge, carry out thesis research and hone skills they can apply in their future academic and career endeavors at Whitman and beyond,” said Victoria Wolff ’12, assistant director for internship programs.

“Students who pursue internships and fellowships in the Walla Walla Valley engage with the local community they call home during their four years here at Whitman. They leave the ‘Whitman bubble’ to build and foster mutually beneficial relationships with community members and organizations, while working on issues that will often have positive and long-lasting impacts,” she said.

Another organization benefiting from Whitman students is the Walla Walla Symphony, which has hosted both summer interns and Community Fellows. Last summer, symphony CEO Leah Wilson-Velasco ’03 worked with Elsa Hager ’19.

Along with providing essential office skills, community internships offer students the ability to try out a career path, Wilson-Velasco said. She credits Whitman students’ readiness to dive into new projects and find ways to improve existing processes. Hagan was a vital part of the symphony team, Wilson-Velasco said, and critical to the production of the Walla Walla Symphony’s annual programs.

“Whitman students are great at problem-solving and coming up with creative solutions. Having another capable, eager, willing and intelligent person who is passionate about the arts in our network has been great,” Wilson-Velasco said.

From her perspective, Schwerin can see the positive impact of the Community Fellows, not just on her organization, but also on the students themselves.

“We didn’t have a community service program like this. If you did something, it was something you kind of put together as a side gig somewhere,” Schwerin said. “I see a huge difference in the students now. They’re all over the community. Now it’s like it’s expected and not just by the administration, but by the students. It’s like, ‘Yeah, I’m going to do my community service.’ It’s huge.’”

McCracken agreed that the opportunity to serve the community is a benefit for students.

“I think when provided with these opportunities to go into a community organization, students are given a skill set with which to build on,” McCracken said. “It’s a very reciprocal sort of process. Students have the benefit of going out and giving back to the community that we live in, and community partners like the YWCA benefit from having fresh, new, curious minds come in and bring different ideas.”