When looking at the vast diversity of the evolutionary tree of life, humans are a pretty small twig.

In Evolution for Everyone, a new class for non-science majors at Whitman College, Associate Professor of Biology Arielle Cooley helps students think about their relationship to the world around them from perspectives informed by evolution, genetics and development. 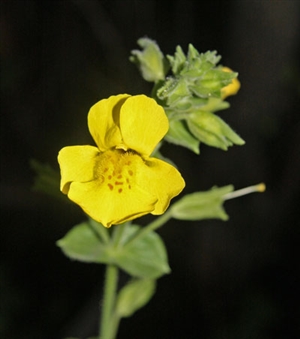 Questions about how organisms are made up, develop and evolve have fueled Cooley’s research in both plants and animals for years. Since coming to Whitman in 2012, her work has focused on the monkeyflower. She has used her research to investigate how molecular changes in DNA give rise to striking new flower colors and patterns.

“From a selfish point of view, it’s important to understand species that are not us because it would be very difficult for us to live without many of them. Non-human species are also just easier to study, in many cases. And because of our shared evolutionary history, we humans have a lot of biological processes in common with non-human species. What we learn about other organisms can help us better understand ourselves.”

Blooms in the Lab

Cooley is an evolutionary and developmental geneticist. Her plant of focus — the monkeyflower, or Mimulus — can be found in Southeast Asia and Australia, and along the west coasts of the Americas from the Bering Straits to Patagonia.

From her lab in the Hall of Science, Cooley works with numerous undergraduate students to explore genetic mysteries. 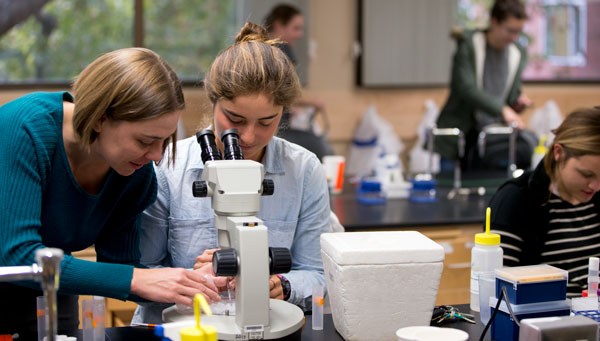 “This is an undergraduate-powered lab, and my students do the research that is coming out of my lab. I really couldn’t do it without them,” Cooley said. “Teaching and research are very intertwined at Whitman. The research students in my lab draw on what they learned last semester in my genetics class, as they design experiments to test the effects of different genes on color patterning. And the research that we do creates examples and ideas for projects that I can bring back to my classes.”

During the academic year, Cooley will typically have four or five students working in the lab, with an additional three to four students working full time over the summer. Student projects include extracting DNA, building transgenes and analyzing genomes. She currently has two grants from the National Science Foundation to support her study of monkeyflowers. Student research in her lab is also supported by funding from Whitman College, including Abshire awards and the Faculty-Student Summer Research grants.

Research at a small liberal arts college puts undergraduates at the front lines of discovery. The roles assigned to Whitman students in the Cooley Lab include tasks that graduate students would typically do in a master’s or doctorate program. Her students also take advantage of her research partnerships with scientists across the country to develop new skills that surpass even her own.

“My grant funding supported flying a student to my colleague’s lab in Virginia this summer to learn computational approaches, since that’s not my area,” Cooley said. The student, Melia Matthews ’20, learned how to use a genetic mapping software called TASSEL. “Now Melia has brought that expertise back to our lab at Whitman, where she is able to share her skills with me and other lab members, as we try to find the genes that contribute to spatially complex color patterns in the flowers of Mimulus hybrids.”

The monkeyflower received its moniker from Swedish botanist Carl Linnaeus, creator of the binomial classification system for naming species. He thought the flower petals resembled the face of a monkey.

Cooley completed her graduate work on monkeyflowers while at Duke University in North Carolina. She did her postdoctoral work on fruit flies at the University of Michigan, then returned to the monkeyflower.

“Monkeyflowers are a wonderful system for undergrads because they are so charismatic and compelling. They are really biologically diverse and less studied than the fruit fly,” Cooley said. “There is a whole lot still to find out about how genomes have evolved to create so much diversity in monkeyflowers, and my students are the ones doing it — they are making discoveries that extend the limits of human understanding.”

Along with using other species to learn about human existence, the study of other species highlights the complexity of various living systems that inhabit our planet.

“The more you learn about other species, the more amazing they seem,” Cooley said. “Plants can do a lot of things that humans can only dream of. For example, since they can’t run away from danger, they have evolved extraordinary chemical arsenals to defend themselves. These unique and powerful chemicals have been developed by humans into hundreds of medicines, from aspirin to cancer-treating drugs.”

Cooley and her colleagues have published their findings about the monkeyflower in high-profile journals such as Current Biology and The Plant Cell. Whitman students are often coauthors. On a recent paper by Cooley in the American Journal of Botany, for example, four of the six authors were Whitman students. 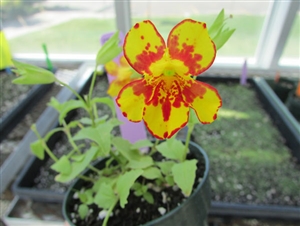 One of the Mimulus hybrids created in the Cooley Lab. Photo by Taylor Wilke ’18.

As with her lab work, Cooley emphasizes that the papers she publishes are a collaborative process.

“No biologist is an expert in everything, and collaborating allows me to tackle complex questions that require more than one approach,” Cooley said. “I think of my lab as being part of this constellation of researchers where none of us is good at everything, but we all share a common interest in how traits evolve and develop. We come at those interests from different perspectives and that is incredibly helpful in coming up with new and interesting ideas and findings.”

As a biologist and professor, Cooley is tasked to ask and answer complex questions about our world. However, Cooley points out that the subjects addressed in science are helpful to students regardless of their chosen field of study.

“Regardless of your major, you haven’t benefited from a liberal arts education if you haven’t had a chance to explore the particular challenges and intricacies of science,” she said. “Our biology classes at Whitman help students develop their experimental creativity, analytical thinking and quantitative skills. And all future citizens of the world will need these tools, as complex problems emerge that demand multidisciplinary solutions.

“As we speak, climate change is perturbing biological systems and exacerbating social inequality around the world. Genetic breakthroughs are creating technologically and ethically complex situations that we don’t yet have good frameworks for dealing with. Understanding how science works, and what it can and can’t do, is a critical part of thinking about these issues. Fortunately, in my opinion at least, science is not just important, but also fascinating and fun to do!”