When Indonesia’s Mount Agung started showing signs of unrest in 2017, Heather Wright ’99 flew to the site to help.

Wright worked with American and local scientists who analyzed seismic signals, set up new instruments and gathered information to help the Indonesian team decide how to respond to the waking volcano.

It was challenging and nerve-wracking, but ultimately a rewarding experience.

“This was a crisis, and we needed to bring all these pieces together. We needed to focus on our mission,” Wright said. “I got some really great feedback after that trip that made me feel valuable and very valued by the team, and that feedback was a lot about bringing people together.”

Wright is a research geologist with the Volcano Disaster Assistance Program, a partnership between the U.S. Geological Survey and USAID’s Office for Foreign Disaster Assistance. Based in Vancouver, Washington, the program works to prevent volcano-related tragedies by collaborating with scientists and public officials around the world.

Wright is quick to emphasize that her job is nowhere close to a Hollywood depiction of a scientist scooping lava out of an active volcano.

While her work sometimes means flying across the globe to respond to a threat, it also involves meeting with global colleagues for trainings and workshops, or spending time in the lab analyzing rock and soil samples to better understand the big-picture geology of volcanoes.

Wright isn’t driven by the perceived risk of life as a volcanologist — she promises her young daughters she’ll stay safe out in the field. But she is inspired by other rewarding aspects of the job.

Grateful for Collaboration and Mentors

In July 2019, Wright’s contributions were recognized by the federal government, which awarded her one of its highest honors for scientists, the Presidential Early Career Award for Science and Engineering.

Wright said she’s humbled and excited for the opportunities the award creates to work with other researchers. For example, she’ll soon be part of a panel discussion about the future direction of research on subduction zones — places where one tectonic plate slides under another.

Receiving the award also makes Wright feel thankful for the people who have supported her over the years.

“I think I got where I am through a series of amazing advocates,” she said.

At Whitman College, Wright earned a bachelor’s in geology with minors in astronomy and Spanish. At an internship at NASA shortly after graduating, she worked with Sue Sakimoto ’89, a fellow Whitman alumna who helped Wright start visualizing her path as a scientist.

Sakimoto praised Wright for her enthusiasm, curiosity, dedication and capability.

“She is one of those obvious rising stars — talented and hard-working scientists that are also great communicators,” Sakimoto said. “As a mentor, you always really hope those students make it through the system. Women have an uphill battle in the sciences, and seeing a deserving one doing well is gratifying.”

At Whitman, Wright worked closely with her advisor, Patrick Spencer, professor of sedimentation and paleontology, and her senior thesis mentor, Kevin Pogue, professor of structural geology.

For her thesis, Wright traveled to Pakistan with Pogue in the spring of 1998. The experience was culturally enlightening for Wright, but also gave her scientific perspective when the research didn’t go as planned.

“It really prepared me for what has turned out to be a great lesson in science, which is being flexible in a lot of different ways, collecting good data and not being so set in the picture of the outcome you want,” she said. “Really, that’s science. Starting with good observations and then seeing where the story takes you.”

Heather Wright  ’99 prepares to take a helicopter flight over the Lower East Rift Zone lava flow in Hawaii in 2018. 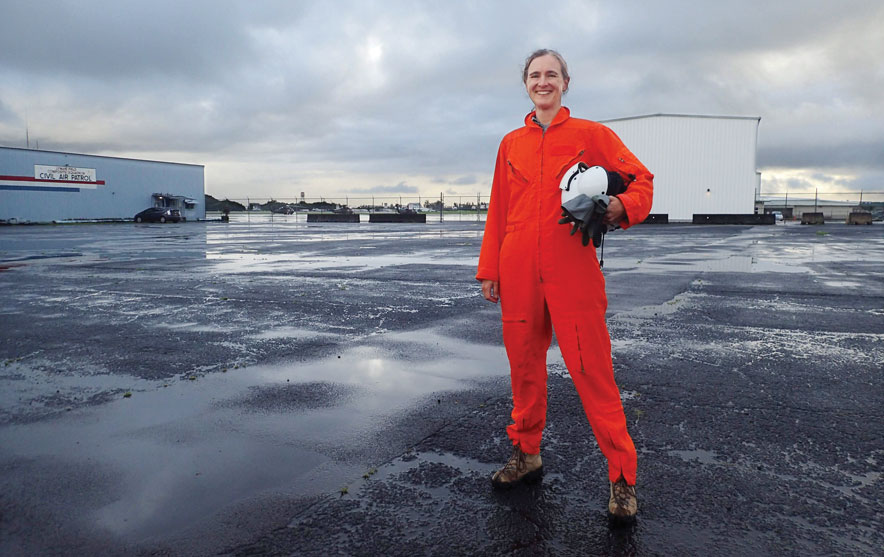 A Love of the Outdoors

Her passion for the outdoors also helped set Wright on her career path.

As a child, she loved camping and being outside while growing up on Whidbey Island, Washington. She remembered hearing stories of weekend adventures from Whitman students, and it’s one of the things that drew her to the college.

Wright started as a physics major but the interdisciplinary nature of geology appealed to her. She discovered the program was packed with outdoor enthusiasts, and field trips were often part of the curriculum.

Tackling these physical challenges prepared her for her future as a scientist — including the times she has to travel across the world to help her fellow scientists prepare for potential disaster.

“Every new experience has presented a new challenge,” she said. “At Whitman, I learned that trying new things gets easier and challenging experiences can be rewarding.”