It is not humanly possible to run a marathon in less than two hours — or is it?

To hit the 1:59:59 mark, a runner would have to average 4 minutes, 35 seconds per mile for 26.2 miles — a feat of speed and endurance no runner has yet accomplished.

Long-distance runner Eliud Kipchoge has come the closest. In 2017, he ran a marathon in 2:00:25 as part of the Nike Breaking2 project. This fall, he is planning another attempt to break the two-hour barrier.

“It is not rocket science to break this barrier,” Kipchoge said in an interview with The Guardian in fall 2018.

Actually, it is rocket science.

“Physical chemistry deals with the pressures and temperatures of the system, and you can define it with Boyle’s law or PV = (nRT) kind of scenarios,” explained Hossein Baghdadi ’00, one of the lead chemists who helped engineer the footwear used in Breaking2.

Baghdadi is one of two Whitman alumni, along with Kato Killops ’06, on Nike’s Innovation team. Together, they help formulate many of the materials that are helping the world’s best athletes achieve levels of performance previously thought impossible.

According to Nike’s recent Impact Report, almost 75% of Nike products contain some recyclable materials. For example, since 2010, 6.4 billion plastic bottles have been diverted from landfills and transformed into recycled polyester for footwear and apparel. All Nike Air shoes, post-2008, are composed of at least 50% recyclable waste, and VaporMax, which contains more than 75% recyclable material, has allowed Nike to remove the need for a layer of foam.

“VaporMax is one of our most innovative air soles — it’s the first shoe with air completely underfoot — and one I’m proud to have had a small hand in developing,” Baghdadi said.

Outsoles, midsoles, uppers and other forms of footwear materials are Baghdadi’s area of specialty at Nike.

Born in Portland, with the Cascade Mountain Range and Oregon Coast as his backyard, Baghdadi developed a deep love for the outdoors and athletics that continues to this day. Over the years, he has run the Boston Marathon and many other running competitions, and frequently places among the top finishers.

He was a member of Whitman’s Cross Country team and fondly recalls running around town.

“I loved Walla Walla for running. I have very vivid memories of going running out in the wheat fields,” he said. “You’d get lost on those old, farm dirt roads. … It was awesome. And I remember seeing sunrises through the wheat fields as you’re running — it’s just picturesque.”

Growing up in the Pacific Northwest also instilled in him the importance of green living.

“We’re constantly thinking about how we can reduce our impact as we innovate,” he said.

“I was super interested in chemistry and math, but I didn’t want to go to a big engineering school,” he said.

His high school guidance counselor suggested that he consider Whitman.

“She said, ‘There’s this program you should really look into called 3-2 Engineering: you go to a small liberal arts school for three years, and then you go to an engineering school for two and you get your degrees at the end,’” Baghdadi recalled. “I checked it out and decided this is what I want to do.” 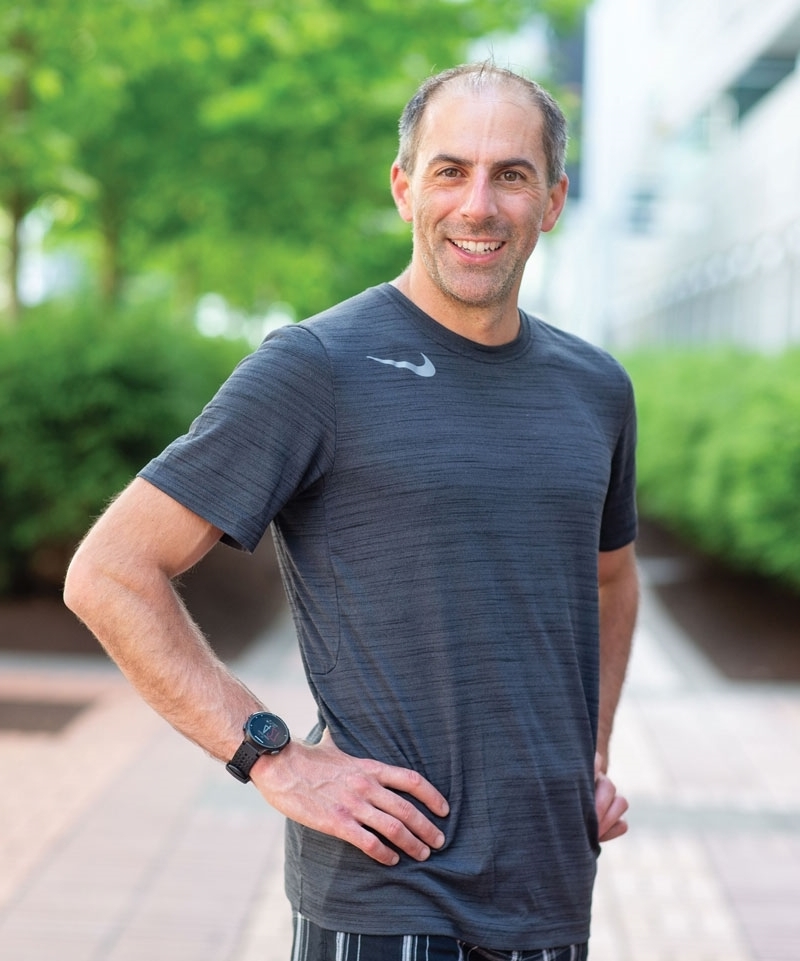 “I also have two great-uncles who still live in Walla Walla, and my great-grandmothers were there until they passed — they owned what was Meyer’s TV and Radio, which was right on Main Street until they retired. We had family reunions in Walla Walla,” Baghdadi said.

His familiarity with Walla Walla made the transition to college easier, allowing him to excel in his chosen field of study.

“In my first year, I actually went in knowing what I wanted to do — and stuck to it,” he said.

That determination and clarity of vision has carried him through his post-graduate education and career.

After completing the five-year program, he earned a Bachelor of Arts in chemistry from Whitman and a Bachelor of Science in chemical engineering from Washington University in St. Louis. In between his fourth and fifth years, he interned with Nike’s Air Manufacturing Innovation.

“That opened the door for me to really realize I could take science and engineering and put them together with the athlete in me,” he said. “That internship also helped me realize I didn’t want to be just someone pressing a button. I really like to dig into the details and figure out the fundamentals. I like doing things, but I wanted to understand how things could be done and how they could be done better.”

He earned his doctorate in chemical engineering at the University of Massachusetts at Amherst, where his studies focused on polymer-clay dispersions — “looking at microscopic structures using X-rays and neutron scattering, and doing macroscopic measurements of rheology,” he said.

In simpler terms, rheologists can be thought of as bakers.

“We’re looking at the very basic chemical blocks of things and how things are built, how do they flow or move — knead, if you will — and then how do they bake,” he said. “Whenever we make something, it’s a lot like a cookbook and a recipe. There are certain ingredients and certain amounts, and then you cook them for a certain amount of time.”

“With Nike React, for example, we looked at the ingredients — the flour, if you will — we’ve used in cushioning innovation in the past. Over the years, we’ve tweaked the flour to make it better, and we’ve done pretty good with that particular flour,” he said.

“But what if we had a whole new flour? What if we went gluten-free? If we go gluten-free, all the other ingredients — the eggs, the baking soda and everything else — have to be adjusted or maybe even changed. It’s really this combination of process and formulation, and understanding how those materials or that chemistry works together.”

Baghdadi enjoys being able to lace his passion for sustainability into his work at Nike.

“Nike is always dreaming and creating the future of sport performance, and I’m proud to work for a company that is committed to creating a better future for our planet and communities around the world,” he said.

As a materials innovator on the same team as Baghdadi, Kato Killops ’06 also keeps her eyes trained on the future of footwear.

“The stuff I work on now is super far-out, really innovative stuff!” she said.

Killops modifies materials for use in Nike’s high-performance footwear. She finds inspiration in lightweight and super-strong materials many might not associate with use in footwear.

When developing a new material innovation, she must also keep in mind that it needs to work in millions of pairs of shoes. Achieving scalability of a new technology requires collaboration across a range of disciplines, and that’s where Killops’ education at Whitman comes directly into play.

“It helps you become a well-rounded individual,” she said. “I knew I wanted to be in science, but if I had gone to a science department at a big university, maybe I wouldn’t have had the same focus on written and verbal communication that there was at Whitman.”

In their work for Nike, Killops and Baghdadi collaborate with scores of manufacturers that make the foams and yarns that go into each pair of shoes. The part of the process where they, as chemists, factor in is in the formulation.

“In order to tell them what we want something to be, we have to be able to speak their language,” she said.

Whereas Baghdadi approaches chemistry from the physics side, Killops comes at it from an organic perspective.

“Organic chemistry deals with carbon and hydrogen and oxygen, the molecules made thereof, and creating reactions to create polymers,” Killops said.

Examples of polymers are the many synthetic organic materials used in plastics, resins and foams, such as those used in athletic apparel.

“Once I realized polymer chemistry is used at Nike, I knew I had to have that job,” Killops said. 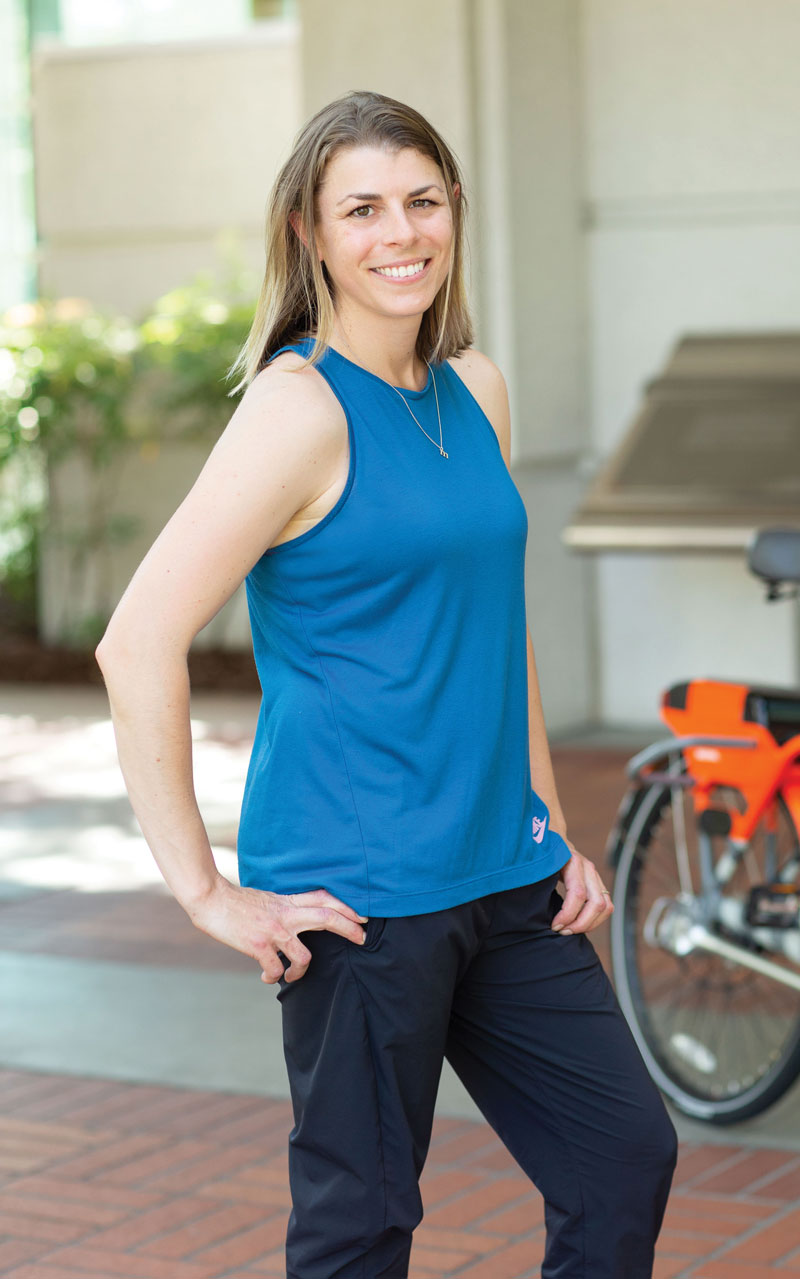 She was inspired to major in chemistry at Whitman while taking classes taught by chemistry professors Frank Dunnivant and Skip Wade.

“I thought, this is really cool! It’s a different language and a different way of looking at the world,” she said.

She ran with that epiphany and pursued an REU (research experience for undergraduates) at IBM, administered by Stanford University.

“I worked in a world-class facility doing very applied research for use in microelectronics, working on polymer interfaces and macromolecular assemblies,” she said. “It was the first time I was connecting this material that I had made to an actual application where they were using it. It felt very real. That was so cool!”

After earning a bachelor’s degree in chemistry at Whitman, Killops returned to her home state of California and earned a doctorate in polymer chemistry at UC Santa Barbara in 2010.

“One of my later grad school projects was putting cells on a polymer thin film, so I had to work with colleagues in biology and get trained how to culture cells. Then I had to work with our materials engineering team to do all the microscopy and analysis, and I even had to use resources from the geology department, because they had a special machine that I needed to use,” she said. “That was all great training for me being at Nike. It’s all about relationships — how you make connections with other people and figure out the fastest way to get your innovation into a shoe.”

Before joining Nike in 2015, Killops worked for four years at the Edgewood Chemical Biological Center in Maryland. Her tenure there was made possible through a scholarship she received from the U.S. Department of Defense, which paid for her doctorate tuition, thus allowing her to graduate debt-free.

Her time working in Maryland rekindled her passion for organic farming.

“On my days off from Edgewood, I would go pick vegetables on an organic farm. I loved it so much. That was the most rewarding thing I did while living on the East Coast,” she said.

The experience connected her back to the agricultural community of Kelseyville, California, where she was born and raised, as well as to the wheat fields of Whitman where she went to school.

“Whitman is a very humble place,” she said. “It’s a place to be down-to-earth, really focused on sustainability and care for the environment. I’ve always carried that with me. Coming from the Pacific Northwest, people really care. We care about recycling, we care about the environment, we don’t want to destroy the place that we live.”