Blue sky peeked through the clouds to shine on bright spirits on Sunday, May 19, 2019, during Whitman College's 133rd Commencement Ceremony.

"Sun in the sky," Fukushima sang.

"You know how I feel," the class responded.

"You know how I feel!" the class sang back.

Everyone was feeling good as hundreds of friends and family members gathered to watch the 313 graduates of the Class of 2019 receive their diplomas.

The ceremony had a performance vibe throughout, with senior class speakers Dorothy Mukasa '19 and Esther Ra '19 offering a song and spoken-word inspired speech, and Fukushima bringing her signature rap- and song-infused style as a performance lecturer and RAPtivist.

It was also a poignant reminder that all things come full circle: President Kathleen M. Murray noted that the class about to cross the stage began their journey at Whitman at the same time she did, the fall of 2015.

She also recalled the 1969 Commencement address from then-Washington Gov. Daniel J. Evans, noting that the same call he gave the Class of 1969, who was in attendance celebrating its 50th reunion, remains relevant for the Class of 2019: "The young people of 1969 might come to the tasks of America appalled by what they see, but they should come committed to rebuild, not destroy, what they find." Murray read from Evans' address. "This generation should be the conscious of the nation. It should serve to remind us constantly that man is mortal and that institutions are permanent only so long as they serve the people. It should continue to probe, to question, to cry out against injustice and corruption and decay and, most of all, it should dare what others only dreamed."

As senior class speakers, Mukasa and Ra recalled those first moments at Whitman four years ago, and remembered the words that Murray said to them at that Convocation: Learn something new.

"When I first came to Whitman, I was terrified of being vulnerable," said Ra, who is from South Korea. "Over time, I learned that there were people who would love both my laughter and tears. I learned that we were young, and incomplete, and we'd always be making mistakes. But that's OK, because with every mistake we would teach each other something new."

Mukasa sang an original piece that she wrote after being inspired by Murray's address in 2015:

"In my first year, I sang at the jazz choir concert, where my friends came to listen," Mukasa said. "Their faces never left the crowd when I performed for the next four years, and I knew that wherever I went, there would be people to cheer me on."

Fukushima, who was celebrating her 10-year reunion, shared her inspirational story of growing up in a world that challenged her abilities, then coming to Whitman College, entering a recording studio for the first time while studying abroad in France, earning her degree in rhetoric and film and media studies, and being able to travel the world through the Watson Fellowship program, and finding her voice as a RAPtivist. She called on the graduates to use the knowledge and privilege they've gained as graduates of Whitman College to embrace the power of their voice, the transformative power of listening, and lean in to the collective freedom songs they have to sing together.

"Don't let people put you into the box of who they think you could be or should be," Fukushima said. "You are now part of a small portion with the power and privilege that comes with a college degree. Remember that questions are just as valuable — if not invaluable — as supposedly having the 'right answers.'"

She reminded the students that they need each other, working together, to make radical changes to culture and the world around them.

"I implore you to speak. To sing. To soar together and not mistake the silence between the notes as weaknesses," she said. "Even when the distance feels too far, the burden too heavy, we are not alone in the collective song.

"We need you, as much as you need each other."

"You know how I feel," the students responded.

"You know how I feel," the class sang out. 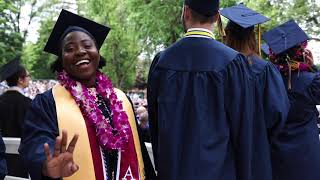