/ ... / Newsroom Camila Thorndike ’10 Speaks on the Fight for Climate Justice

National climate policy advocate Camila Thorndike ’10 returned to Whitman College to kick-start the college’s 2022–2023 Academic Theme, Climate Justice, Climate Action. On Tuesday, Sept. 6, she spoke to a room of student activists and Whitman community members for her talk, “The Fight for U.S. Climate Policy: from Student to the Senate.”

Thorndike urged action in the face of the climate crisis and offered the audience ways to get involved in the fight for climate justice.

Climate change is “...not some far off threat. It’s happening here and now,” she said. To illustrate the immediate and growing impacts, she referenced how it's happening right here in Walla Walla, noting the recent heat wave and wildfire smoke are causing the world-famous Walla Walla Sweet Onions to blister.

“[Climate change] is a product of a rigged and broken system,” Thorndike said. She pointed to how American policy has historically been driven by corporations that are largely concerned about profit.

What’s the most productive and effective way to make a difference now?

Through voting, according to Thorndike—starting with who you vote for and their beliefs and actions. She urged the audience to stay informed, vote and fight for climate justice.

“Be engaged in the midterm elections. We’re building a bench of climate leaders.” 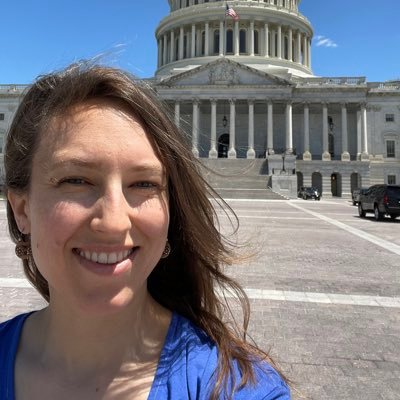 From Student to the Senate
Thorndike is well-known for her work as a national climate policy advocate and community leader. She has organized efforts across eight states and the District of Columbia for climate action and progressive change. She served in the U.S. Institute for Environmental Conflict Resolution, led outreach for a regional land use planning process in Arizona, and spearheaded public engagement for a musical about fossil fuels. Thorndike also co-founded Our Climate, a youth advocacy nonprofit organization, and campaigned to pass 100% renewable electricity in the District of Columbia.

In 2020, Thorndike earned her Master in Public Administration at Harvard Kennedy School. More recently, she played a significant role in national policy—during her time as a legislative assistant to Senator Bernie Sanders. Her work focused on the Build Back Better Act, which eventually set the climate policies in the Inflation Reduction Act of 2022. The historical bill allocates $370 billion toward clean energy, aiming to reduce carbon emission by roughly 40 percent by 2030.

In her talk, Thorndike credited her time at Whitman for shaping her into the climate activist she is today. In 2008, she traveled with Semester in the West and inspired classmates in her Baccalaureate speech “Why We Are Not Going to Save the World,” graduating with honors in Environmental Humanities in 2010.

Whitman introduced her to friends who were not only outdoor adventures and ultimate frisbee enthusiasts but change-makers willing to fight for a greener future. It was at Whitman that she saw how the initiative of one person could move and inspire a group of people to take up the charge for climate change.

For Thorndike, it’s been rewarding to see the paths her friends and fellow Whitties have taken in making a better world for current and following generations.

Bertine Lakjohn is a climate advocate and a Whitman College senior from the Marshall Islands, majoring in Sociology-Environmental Studies. She is one of the student leaders for the 2022–2023 Academic Theme: Climate Justice, Climate Action. Find upcoming theme events.