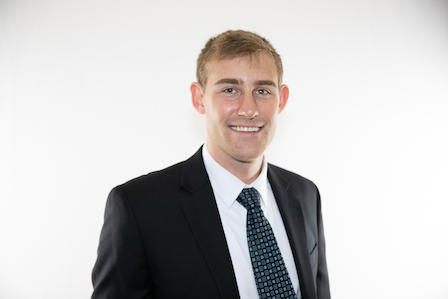 Samuel Curtis '16 became the first Whitman College graduate to receive the coveted new Schwarzman Scholarship this week. Considered China's equivalent of the Rhodes Scholarship, the Schwarzman Scholarship was awarded to just 147 students this year out of an applicant pool of more than 2,800. Those selected represent 119 universities and 38 countries, with only 40 percent of recipients originating from the United States.

Curtis and his peers will enroll at Tsinghua University in Beijing next August to begin courses in public policy, international studies, economics and business with an emphasis on cultural immersion.

"Sam exemplifies Whitman's efforts to prepare students for world citizenship," said Whitman President Kathleen Murray. "His focus on education and global security speak to a strength of character that will serve him well and surely benefit many others over the course of his career, and we applaud this impressive achievement."

A biochemistry, biophysics and molecular biology (BBMB) major from Corvallis, Oregon, Curtis received a Paul Garrett Scholarship to Whitman and the Ben Rabinowitz Award. He also founded the Glean Team, a student-run organization dedicated to gathering leftover produce from harvested fields and donating it to the Blue Mountain Action Council, which distributes to local food banks.

Prior to his pursuit of a master's degree, Curtis traveled to South Korea as a Gilman Scholar and earned a Princeton in Asia Fellowship to teach English in Kazakhstan. He later served as the research and communications assistant to Dr. Chan Young Bang, former Economic Advisor to Kazakh President Nazarbayev, to draft a policy recommendation for the denuclearization and economic modernization of North Korea. In this role, Curtis corresponded with high-ranking North Korean, South Korean, American, Chinese and Kazakh officials, and assisted with the establishment of the DPRK Strategic Research Center at Kazakhstan's KIMEP University.

"I intend to continue to study global affairs, and I think this scholarship will serve as an invaluable opportunity to support that with a year focused on Chinese culture, language, and trends," he said. "I am looking forward to my year in Beijing, and am so grateful to Whitman for providing me an education that has supported me on this path."

Schwarzman Scholars are chosen through a rigorous application process designed to evaluate academic ability and identify candidates who have demonstrated exemplary leadership qualities as well as the potential to bridge cultural and political differences. In addition to funding for their studies, they gain unrivaled exposure to a broad network of internships, mentorship opportunities, high-profile speakers and opportunities to travel throughout China, developing an in-depth understanding of the country.

"It's been a delight to follow Sam's trajectory at Whitman and beyond," said Director of Fellowships and Grants Keith Raether. "The Schwarzman rewards and prepares leaders who think creatively and critically, who act wisely and ethically. Sam fills that bill admirably—a caring guy who taught his Kazakh students English through rap lyrics and summaries of David Foster Wallace essays. His future as a policymaker is bright."

Clement Biddle Penrose Professor of Latin and Classics Elizabeth Vandiver further praised Curtis's "academic brilliance, wide-ranging intellectual curiosity, deep and abiding interest in other cultures, and strong drive to make a difference for the better in the world."

Brit Moss, assistant professor of biology, added, "During and outside of class, Sam was thoughtful, outgoing, and eager to engage in conversations ranging from science to food security to politics. It is exciting to see how someone like Sam has used his Whitman BBMB degree and liberal arts education as the foundation to build a career focused on pressing global security issues."