Class of '67 gives more than $1 million, commits to $9 million in estate planning

The class of 1967 showed its appreciation for Whitman College in significant financial ways at a 50th reunion luncheon over a weekend that coincided with the recent Commencement.

They raised almost $1.4 million for their alma mater—the second highest gift total for any graduating class in Whitman's history. And they have estate commitments to Whitman valued at more than $9 million—the most for any Whittie class.

"The class of 1967 showed how the bonds developed at Whitman last a lifetime. Whether it was the camaraderie at Sherwood House on Thursday night, the Saturday evening dinner or the In Memoria gathering, the bonds were evident throughout the weekend," said John Bogley '85, vice president for development and alumni relations. "The tremendous generosity shown by the members of the class is a reflection of how alumni value both their Whitman education and the enduring friendships made during those same years." 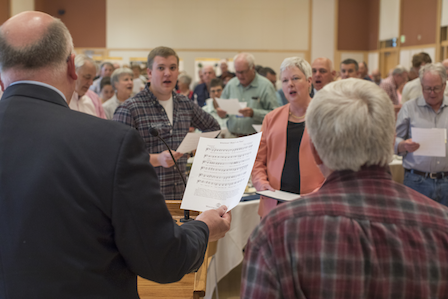 Dennis McNair '67, a member of the Alumni Board and class co-chair, praised fellow Whitties for their "generosity of spirit" at the reunion luncheon. He added that the "Whitman experience was and continues to be the people in this room."

The alumni in attendance for the festive meal—86 Whitties along with spouses or friends—cheered when told of their largesse, which, as of press deadline, was given by 114 members, or 67 percent, of the class. Gifts are counted through June 30, so numbers will likely rise.

Indeed, after partaking of baked salmon and chocolate sponge cake in Young Ballroom of the Reid Campus Center, the class of 1967 delivered a memorable version of the "Whitman Hymn," a customary song at reunions. Some crooned in harmony while others punched their fists in the air to accentuate the line, "Dear old Whitman! Here's to you!"

Of the $1.4 million, more than $480,000 is earmarked for the Living at Whitman Initiative, a $40 million project to enhance community at Whitman through a new residence hall, the first since Douglas went up in 1969, and an adjacent dining commons. One-hundred-fifty sophomores will occupy the three-story residence hall. The dining commons can accommodate upward of 500 people.

"The Living at Whitman project is a top college priority and integral in our efforts to enhance the sense community on campus," said President Kathleen Murray.

Both sites are scheduled to open in fall 2018. 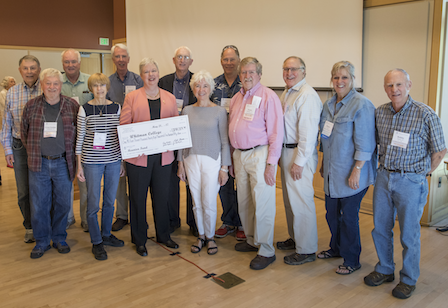 Brad McMurchie '84, chair of Whitman’s Board of Trustees, praised the luncheon guests in opening remarks for their "sustaining sense of community that we all value." President Murray then summarized some Whitman successes during the 2016-17 academic year—from two Watson Fellows to six teams competing in NCAA tournaments. Alumni applauded and oohed at several of the accomplishments. Murray then took questions, all either supportive or informational. Blake Ladenburg '17, senior fund chair and an economics major, shared that 52 percent of the class of 2017 gave more than $20,000 cumulatively to Whitman's senior fund.

Ladenburg also mentioned that in a poll conducted by Alumni Relations, the class of 1967 said the top three benefits of Whitman were that it "opened up the world," taught critical thinking and supplied lifelong friends.

His class, too, and all Whitman classes celebrate the education and culture that Whitman provides, he observed.