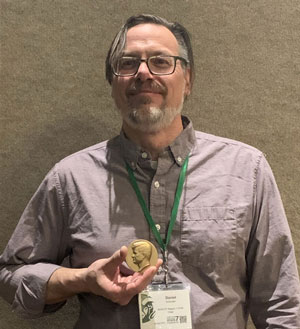 Each year, the eight KCACTF regions honor individuals or organizations that have made extraordinary contributions to the teaching and producing of theatre and who have significantly dedicated their time, artistry and enthusiasm to the development of the Kennedy Center American College Theater Festival. Most importantly, recipients have demonstrated a strong commitment to the values and goals of KCACTF and to excellence in educational theatre. It is the most prestigious regional award given by KCACTF and is considered one of the great honors in theatre education.

Peter de Grasse describes how he began his dance project for a friend’s International Cyber Dance Festival in Southern India but ended with a response to George Floyd’s murder and the police brutality against Black people sweeping the country.

He had been listening to Rodney Outlaw’s song “They Know” and wanted to create something for the track, which Outlaw agreed to. de Grasse put out the call on social media for a filmmaker to collaborate with, and was lucky enough to find Sarah Koenigsberg, creator of environmental documentaries. They made a four minute film together in about a week’s time—“writing, shooting, editing, everything,” working day and night for 14 hour days. de Grasse describes the work as a “movement research essay,” which he also refers to as “labbing:”

“You have an idea or feeling and you’re not really sure how it’s gonna work out, but you want to investigate it and see if you can get something out of it or see if there’s something further there.”

de Grasse wanted to explore what the traditional angles in popping would look like slowed down to Rodney Outlaw’s music. He describes both this particular movement and the process as a whole as having “a reflective element,” which was relevant during a time of national attention turned toward police brutality.

“Hip hop is a social dance culture,” de Grasse says. He goes on to explain how it has roots in 1970s South Bronx as African American and Puerto Rican culture, which was also practiced by Afro-Caribbean, Jamaican, and Barbados peoples. The Four Elements Theory includes DJing, Bboying/Bgirling, Graffiti Writing (Graff), and Rapping or MCing as elements of Hip Hop, called Breaking. Popping, on the other hand, which is what inspires de Grasse’s piece, is west coast street style, with an Oakland and Bay Area root.” Both of these forms have roots in community responses to police brutality.

de Grasse: “I’m a popper. Inside the culture I say I’m a hitter and a waver . . . and I practice principles of animation,” he says.

de Grasse describes himself as “a White guest in the culture:”

“I don’t claim hip hop. I don’t claim to be or represent hip hop. . . . I embrace hip hop and I love hip hop and I contribute to the culture in different ways. . . . If you just see a video of a White guy dancing, all you can do is look into it. . . . I wouldn’t expect anything other than a healthy skepticism from anyone watching it . . . but my hope is that anyone who’s skeptical and also cares to look further will see that it’s a straightforward honest offering—it’s a reflective offering.”

de Grasse describes the process of filming in various railroad locations around Walla Walla as a nod to hip hop—particularly the local hip hop community. The train yards in the area are covered with highly skilled graffiti, a highly significant artform for hip hop culture. de Grasse explains that the elevated trains crossing between Manhattan and the Bronx were the main Graffiti hotspot in the early 70s to mid 80s. de Grasse expresses interest in a local Graffiti artist who has come to his attention, but recognizes that he will likely never know this artist—the misdemeanor charges associated with Graffiti force artists to remain anonymous.

de Grasse reflects on his intentions with the piece as a whole:

Ryn: “What did you learn from creating this piece? Did it change how you envision your contribution to the world in relation to police brutally and White supremacy?”

de Grasse: “I think there’s a kind of . . . stasis that comes from a privilege of movement or action not being necessary. And I think response to systemic inequities is highly individual, but it does come down to reflection—what is my position, and then action: what is it that I can do? And one thing that I can do is dancing. . . . And I think I needed to restore that confidence that a dance response is always okay—an artistic response is always ok and maybe necessary because we need to take action, but you know, we need joy and we need healing and we need celebration and we need social connectedness.”

Ryn: “How do you hope your audience will be changed by watching this piece?”

de Grasse: “I hope that people enjoy it. I hope that people say Oh, Rodney Outlaw, I haven’t heard of him. What’s he up to? What’s he making? . . . . What’s Walla Walla Music Organization? It’s an awareness thing. I want people to read that credit and then just want to find out. And the same thing for Sarah—Sarah Koenigsberg, she’s a filmmaker in Walla Walla? There is one? Who is she? What is she doing? What are her projects? . . . . Is there hip hop in Walla Walla? Who’s doing it? How did this come about?

In addition to his dance project, de Grasse used the Whitman Mellon Grant to create a two-part curricula and event project involving the Walla Walla community. He credits former acting professor Jessica Cerullo with informing him of the Mellon Grant and suggesting that he ask community members he knew what they would do with more resources. After talking with Louie Miranda, who works with YMCA Community Center for Youth, and Rodney Outlaw, who runs the Walla Walla Music Organization, a collaborative hip hop course and the Mellon-funded 5th Element Project came to be.

In the 2020 hip hop course, students were divided into two groups—one studied music production with Rodney and the other studied breaking with Louie. The grant required a Whitman professor to teach as well, and Rodney and Louie encouraged de Grasse to teach hip hop. de Grasse explains how local middle and high school students of Louie and Rodney’s began participating in his classes as well but didn’t receive credit for it.

The Mellon-funded 5th Element Project, which is scheduled for next October, would entail a dance battel, workshops, a dance party, and a variety of national and international guest artists to teach, dance, and make music. Additionally, a Graffiti mural featuring Sahaptin greetings has been commissioned to be painted by Angelina Villalobos on the Flatiron building by the Marcus Whitman statue. According to de Grasse, “it will function as a kind of visual form of land acknowledgement.”

Now de Grasse has bigger goals. He wants students from Nixyaawii and Lincoln High Schools to be able to earn credit and obtain a Whitman transcript for participating in his hip hop courses. He is working on creating an adjacent Academic Enrichment Program for this to be a possibility.

de Grasse rejects labels such as “diversity” in his intentions with the program:

“Here we are, a bunch of White people, and we’re not feeling very good about how White we’re looking and so we need some people of color to come in here and help us. That’s a very weird state of affairs. My question is what are we doing. And we’re teaching, that’s the answer. So then the next question is who are we teaching? And are we teaching people who represent where we are? And the answer is no, not nearly to the degree that we should be. And then the next question is okay how do we change that? I don’t think that’s diversity, I think that’s ethical.”

He goes on to say that the people in our surrounding area—on the reservation, at Walla Walla Farm Labor Homes, in Vista Hermosa, Dayton, Prescott, and other rural areas of Walla Walla county—aren’t receiving the support or services they need from the educational not for profit infrastructures in place. As he says, “the reasons for that are deep and complex.”

de Grasse: “My hope and my dream is that there could be sustainable, continuous, long-term access to Whitman courses for people from those communities and those parts of our region.”