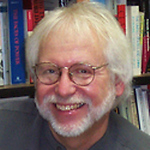 Keith Farrington has been a member of the Department of Sociology at Whitman College since 1977. He retired in spring 2020. A transplanted northeasterner who received his bachelor's from Bates College and his doctorate from the University of New Hampshire, Farrington long ago became a true northwesterner in mannerism, mindse, and mentality. His fields of specialization are sociology of the family, criminology, the sociology of prisons and punishment, social psychology, the sociology of popular music, and social research methods (both quantitative and qualitative). His recent professional work has been in the areas of:

Farrington served two terms as chair of the Whitman faculty (1998-2000; 2000-2002) and two terms as the director of the college's Center for Teaching and Learning (2003-2006; 2006-2008). He has received a number of college awards for teaching, advising and scholarly activity, and, in 1992, he was fortunate enough to be named Washington State Professor of the Year by CASE (the Council for the Advancement and Support of Education).

An aficionado of virtually all kinds of modern music, Keith plays electric bass in whatever spare time he can muster, and he is currently a founding member of the local musical group, Early Morning Traffic. Two previous musical groups, The Walla Walla Rhythm Train and Orange Fight, released self-titled CDs in 2002 and 2009, respectively. Farrington continues to be an avid New England sports fan, and has basked in particular in the recent successes experienced during the past decade-and-a-half by his beloved Patriots, Red Sox and Celtics. With the advent of around-the-clock cable television and 24/7 news cycles, Keith has become something of a politics junkie, and his mood and general outlook on life often hinge upon the content of the most recent Rachel Maddow and Chris Hayes television programs on MSNBC. Farrington's wife of over 40 years, Nancy Tavelli, is theaAssociate dean of Campus Life and the director of Residence Life and Housing at the college, while his older daughter, Jane, is a recent graduate of the Stanford University Law School and the Woodrow Wilson School of Public and International Affairs, and his younger daughter, Katharine, is the founder and President of Forgotten Dogs Rescue in western Washington.