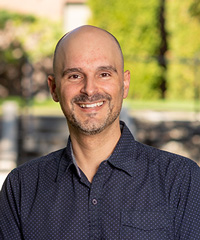 Álvaro Santana-Acuña (Ph.D., Harvard University, 2014) is Associate Professor of Sociology at Whitman College, where he teaches courses in Cultural Sociology, Social Theory, Political Sociology, and the Sociology of Big Data.

He studies the intersection of material culture and social orders and is particularly interested in how people use objects as vehicles for the transmission of dominant cultural values and norms. His scholarship has appeared in the American Journal of Cultural Sociology, American Sociologist, Historia Social, and Journal of World Literature and has received awards from the American Sociological Association.

Santana-Acuña is the author of the book Ascent to Glory: How One Hundred Years of Solitude Was Written and Became a Global Classic (Columbia University Press, 2020), a groundbreaking and award-winning study of the imagination, production, and circulation of One Hundred Years of Solitude, one of the best-selling novels of all time. Translated into Arabic, a Spanish edition of Ascent to Glory is forthcoming in 2023. He is also the curator of “Gabriel García Márquez: The Making of a Global Writer,” the first major exhibition featuring documents from the García Márquez’s archives, alongside other materials by William Faulkner, Ernest Hemingway, James Joyce, Virginia Woolf, Jorge Luis Borges, and Julio Cortázar. This exhibition first opened at the Harry Ransom Center, University of Texas at Austin, in 2020 and then at the Museum of Modern Art in Mexico City in 2022.

Santana-Acuña is the co-editor of Sociology of the Arts in Action: New Perspectives on Creation, Production, and Reception (Palgrave Macmillan, 2023). (Spanish edition by Gedisa). Offering cutting-edge empirical, theoretical, and methodological contributions, this volume features research by scholars and/or scholarship connected to the Global South.

With Whitman students and the support of the Abshire Research Award, he is working on a project that georeferences over 2,000 land-surveying maps made in France between 1802 and 1807. Not only are these the first land-surveying and geodesic maps produced in Europe at a full national scale, but also analyzing them is the first step to enhance our understanding of the process leading to global spread of the nation state as the dominant form of governance in the last two centuries. The globalization of cadastral surveying in connection with the rise of the modern nation state is the subject of his next book The Land and the Triangles: Cadastral Mapping Invents the Nation State.

Over the past two decades, Santana-Acuña has been actively engaged in heritage protection in the Canary Islands (Spain), where he was born and grew up. This archipelago is one of the top tourist destinations in the world. It also has four national parks as well as four of Unesco’s World Heritage sites and seven of its Biosphere Reserves. Hence, the Canaries are a major laboratory to understand the clash between the damaging environmental effects of mass tourism and the need for fully inclusive heritage protection. Santana-Acuña’s efforts have earned him awards and support from local cultural and political organizations.